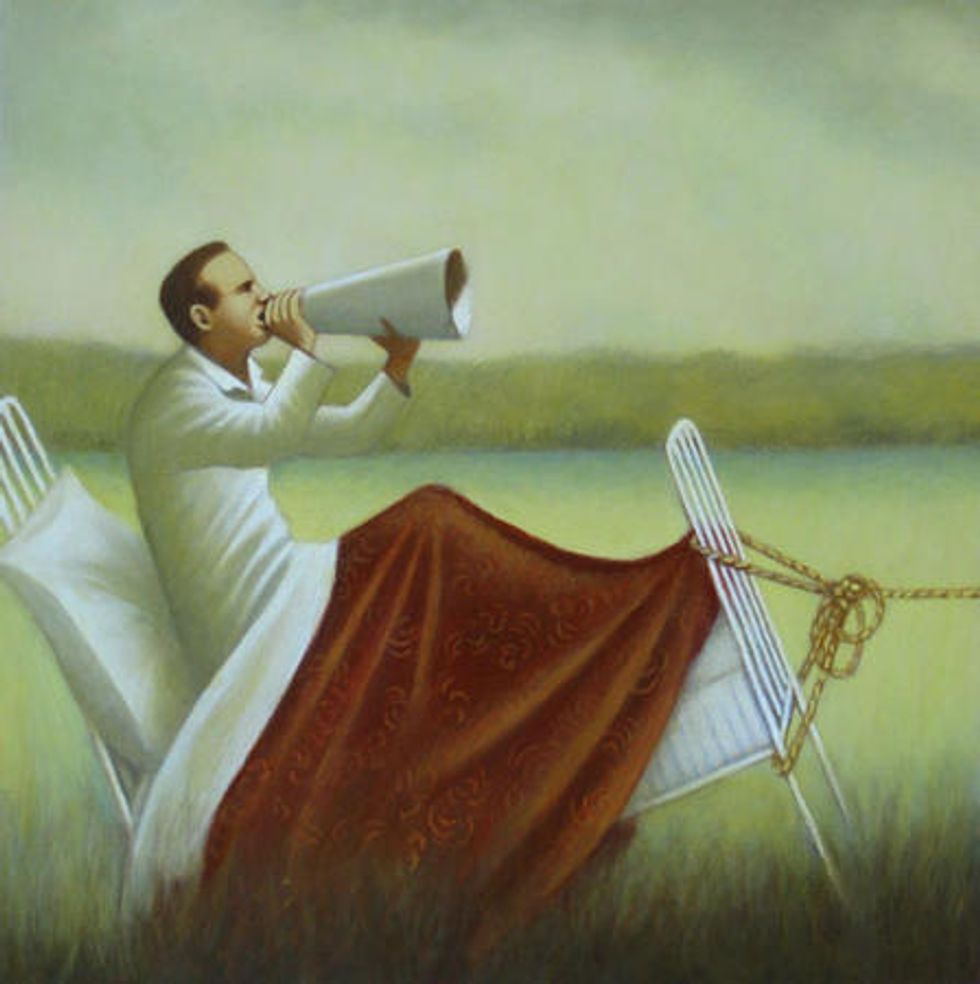 A Guide to Open Studios

October in San Francisco features the sundress weather we never got in July, a subsequently confusing profusion of pumpkins, and local artists opening their studios to the public in every neighborhood we have, including some you might not know existed. (Mount Davidson, anyone?) There’s so much excellent art to see in so many neighborhoods that not even the most savvy googling can unearth everything - so we recommend you go where the whim strikes you to see local art at its origin. Here are the artists and neighborhoods that strike us.

Dana DeKalb’s paintings are whimsical and Magritte-esque, featuring men being towed in metal frame beds across deserted fields while bellowing into a megaphone something like, “Dude! Just let me set an alarm clock! THIS IS NOT NECESSARY.” Other work shows nudes making shadow puppets on parlor walls or friends reclining on a stage floor watching solar systems circle above their heads.

Annie Galvin’s rosy-hued stories are inspired by San Francisco, Mexican wrestlers, and Haruki Murakami. She wants them to raise intriguing questions, like ‘Isn’t it dangerous to be hugging a bear?’ and ‘Where did she get that canary and what does she plan to do with it?’

Rachel Znerold’s glowing landscapes are tributes to Dolores Park and pastoral California, while her charming “Postcards from San Francisco” feature scenes from the city's history painted on recycled cabinet doors.

Misho’s abstract brain - here portrayed in mixed media and photography - is a swirling tribute to beauty and the occasional scrub brush. More a suggestion of topic than a true portrayal, his work taunts the imagination. (Ink-speckled owls? Monet without glasses? Uh...dominos?)

Mark Chester is a radical sex photographer (work displayed on Folsom Street, of course, which lends a sense of all being right with the world) who has been documenting his life in the underground sex scene for three decades. Ropes, leather, and padlocks, oh my.

Marcia Steurmer uses translucent resin as a biological freeze frame, capturing cells and organisms and blots of bright color in a gorgeous portrayal of what lies within. (What lies within looks like it was designed by a classy Norwegian.)

Liz Mamorsky has created a charming army of robots, bent on governmental coup. Or at least providing a new home for those recycled circuit boards, antique wooden foundry patterns, clocks, and license plates.

Daniel Kennedy paints what appears to our possibly philistine eye to be orange fish yelling, industrial facilities in primary colors, and figures dancing in an art deco-Picasso hybrid.

Stevan Shapona’s figure drawings are graceful nudes that tread the line between classical and modern - a man’s back leaning toward one spectrum, a woman in high heel boots reclining on a couch leaning toward the other.

Uma Rani Iyli paints dots in brilliant ethereal blue and blood red, with winding patterns and the occasional flower emerging from a raft of color.

Steven Allen’s award-winning sculptures feature ceramic semis - some toting strawberries and others leading fish - driving through the curling pages of a book.

Pat O’Connor’s work has an Andy Goldsworthy-like quality to its curling twigs and rows of soldier-like trees, despite taking up fewer dimensions in the world.

Nomi Klein uses mixed media and sculpture to create everything from giant chess games to streaking asteroids of color.

Kim Saccio-Kent’s violets are reminiscent of Georgia O’Keefe and her abstracts have that lovely modern color that seems lit from within.

Kathryn Clark creates simple circles and lines on linen, with splashes of red with an aim to bringing awareness to the pared-down details of life.

Philippe Jestin makes mobiles comprised of paper eyes, draws a turquoise ribbon down 16th century faces, creates circular blue thumbprints, and paints red and white striped curtains draped in a way that makes you wish there really was something behind them.

Jamie Krueger's photographs depict urbanscapes and rock formations of the Could Be An Alien World genre or that appear etched from sand.

Leslie Morgan grew up in the Texas desert, dreaming of pirates and tropical islands. Public pools had to fulfill her longing for water and her photography now depicts her memories of childhood in swimmers, boats, diving boards, and clear blue depths.

Through October 31. In venues around the city. For more information, visit artspan.org.