A Guide to San Francisco's Bike Symbols and Infrastructure 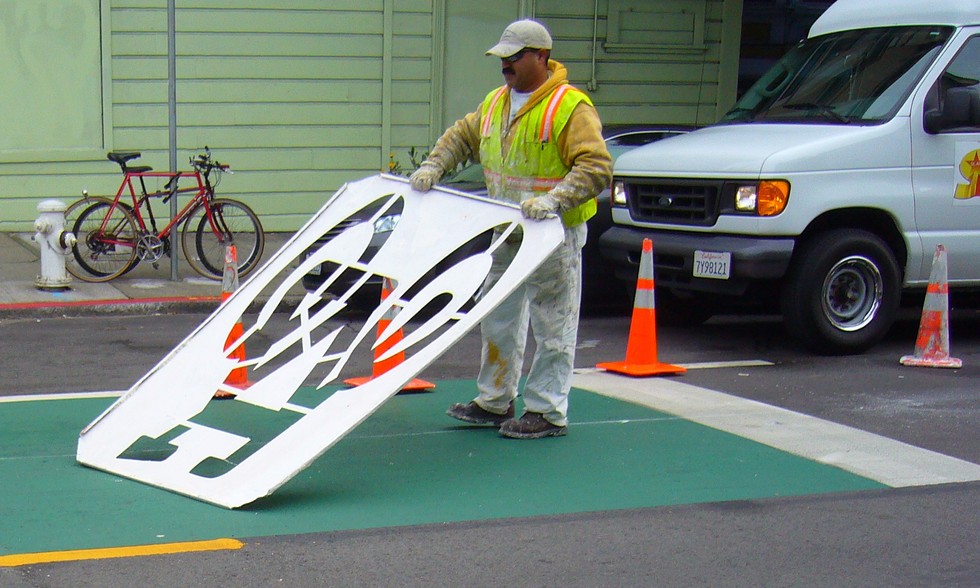 Previous Next
Installation of California's first bike box, on the Wiggle in 2010 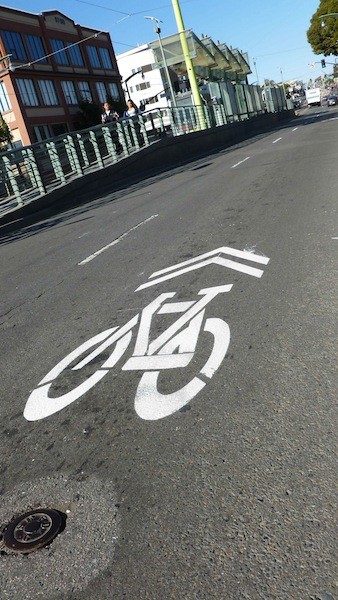 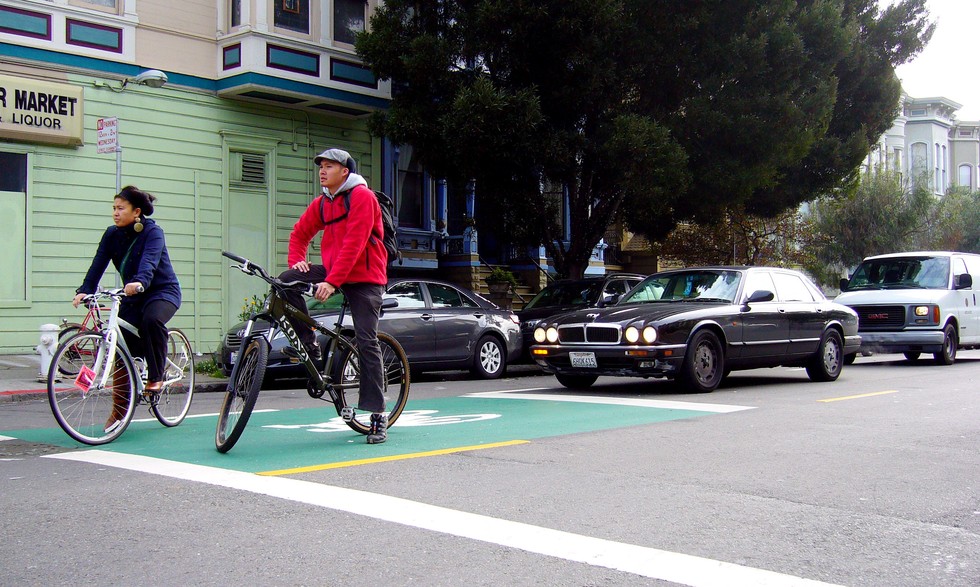 Previous Next
Bike box for bike riders to wait in 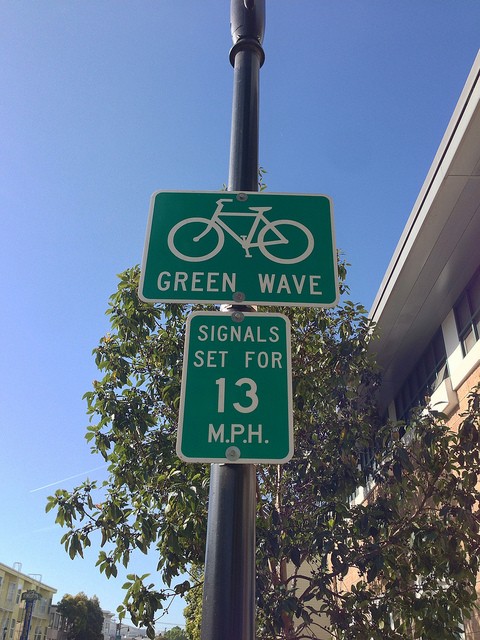 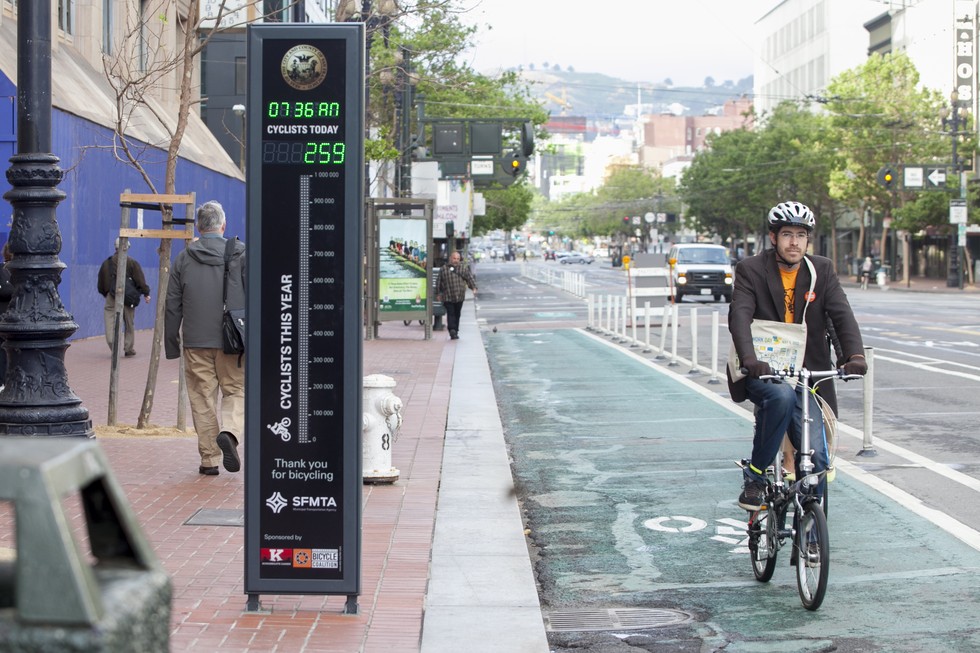 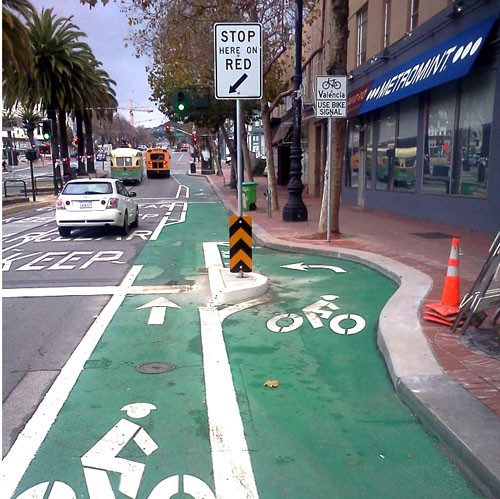 Previous Next
Bicycle Bay at Market and Valencia Streets

San Francisco streets are changing. In the last year, 22 miles of new bike lanes have been laid down on our city streets and a number of other bicycle safety projects have also gone in. But not everything is as simple to understand as the two white lines of an ordinary bike route. Whether you’re in a car or on a bike, it’s helpful to understand. So here’s a glossary:

Sharrow: You’ll see these all over San Francisco, even on streets without bike lanes. Sharrows are the symbol of a bicycle with two arrows or chevrons above it. It’s a Share the Lane Arrow, or sharrow. The term was coined in San Francisco and it’s now used across the globe. The sharrow is used to designate a bicycle route on streets without bike lanes. The sharrow is placed just outside the door zone, so if you’re riding a bike on a street with sharrows, you should ride right in the middle of it. If you’re driving on a street with sharrows, understand that bike riders should be riding in the middle of the sharrow, so don’t honk at them.

Bike Box: Bike boxes are becoming more prevalent in San Francisco, though you’ll see more of them in Portland. These green boxes are painted at intersections, just behind the crosswalk. They’re designed to give bike riders a safe spot to stop, keeping them out of the danger of any right-turning cars, and make it so you don’t have to breath car exhaust while waiting at a light. If you’re driving, please stay out of the bike box, even though your car probably fits right inside it.

Bicycle Bay: There’s a new turn at Market and Valencia Street. Before this year, if you were one of the thousands of bike riders each day who wanted to turn left onto Valencia from Market, you’d have to race and dodge Market Street traffic and then navigate a series of F Train tracks. Now, you can just tuck into the new bicycle bay. When you’re approaching Valencia Street and want to go down Valencia, just follow the signs for Valencia, tuck into the right side of the cut-out bicycle bay, wait for the green bike light, and voila!

Green Wave: Speaking of bike lights, the green wave is a bike project worth talking about. Green Waves are relatively new to San Francisco. In a green wave, the lights are timed at 13 miles per hour, which is average bike speed. It means if you pedal consistently and don’t try and race the lights, you’ll catch the greens for several blocks continuously. Valancia Street and 14th Street both have green waves, and more are planned across the city.

Separated Bikeways: Separated bikeways, also known as buffered bikeways or green lanes, are used throughout the world to make streets safer for people biking. Separated bikeways are more than just paint; they have an actual barrier between the bike lane and car lanes. They’re designed to be safe enough for people ages 8 to 80 to pedal on them. More than that, drivers tend to like separated bikeways because it helps to organize the chaos on busy streets, and they don’t have to worry about potentially hitting a cyclist. Market Street has a separated bikeway for some of it, and those few blocks are the only mellow part of the Market ride. Fell and Oak streets have new separated bikeways underway. They’ll eventually have planters with greenery, but it’s just posts and paint right now.

San Francisco was just ranked the 2nd best city in the country for biking. The new bike projects and huge growth in ridership are helping make biking in our city even better.