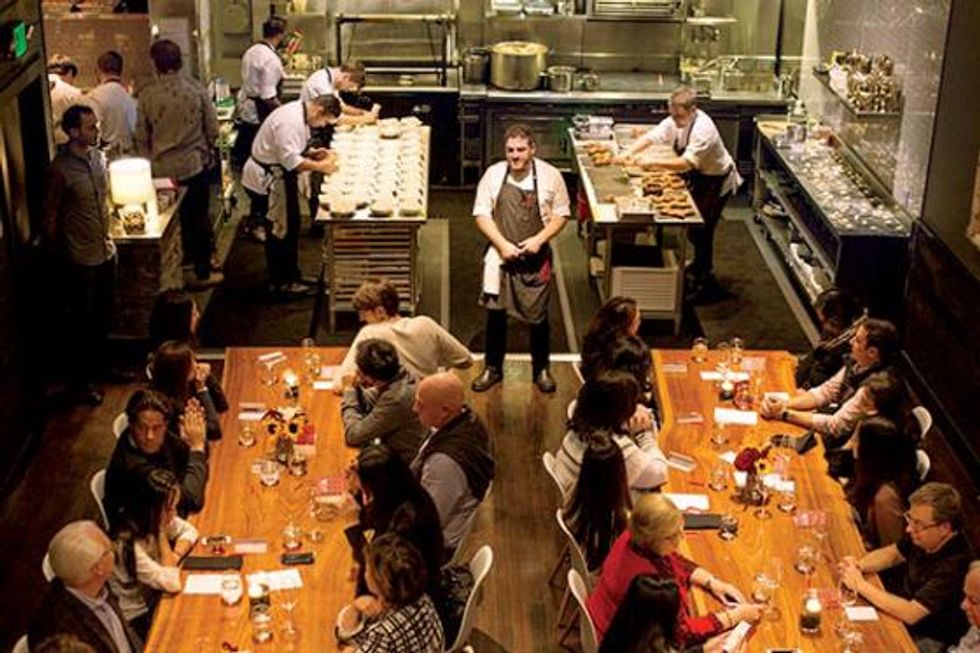 At least that was my rationalization when my mom offered me a free, one-person reservation to San Francisco’s hottest new restaurant, Lazy Bear, since she was unable to go (thanks, Mom!). I had only a few minutes to decide whether I would take it, and how could I say no? Everyone and their mother has been trying to get reservations at this seven-month-old restaurant, and for $150 a meal, I wasn’t going to get another shot unless I snuck in and pretended to be Abe Froman, the Sausage King of Chicago. Plus, the restaurant features communal tables, and their website emphasizes mingling and making new friends, so theoretically dining alone should not have been a problem.

Spoiler alert: it was.

How does any modern professional woman cope with shyness and being alone in a new environment? That’s right—I got super drunk.

I’ll spare you the details, but suffice it to say that I failed at mingling/becoming besties with other diners, overcompensating for my shyness with entirely too much alcohol. Apparently sitting alone, drinking wine, and texting kills the restaurant’s carefully curated vibe to the point that they send a server to keep lonely guests company (shout out to April!).

I was three $16 drinks in by the time we were all seated for dinner, and that’s a lot of booze for this lightweight. Fortunately, that investment in alcohol got me ready to be friendly, and assigned seating meant I didn’t have to try too hard. The group on my left, while extremely nice, was more interested in being on a date with each other than entertaining a drunk 25-year-old eating alone. The group of three on my right took me in for the evening, even going so far as encouraging me to order the $75 drink pairing that I neither needed nor could afford. I may not be able to remember their names, but I’ll always remember them fondly, especially the well-dressed guy from the publishing company who found my drunken anecdotes amusing instead of annoying.

Let me paint you a picture of the gourmet restaurant I proceeded to defile with my aberrant behavior: You enter to find two long wooden tables parallel to one another and perpendicular to the open kitchen at the end. Serious-looking but generously bearded chefs work tirelessly as diners either converse with them or compare mouthfeels with one another. The vibe is one of eating in a friend of a friend’s home, where you feel some sense of comfort and familiarity but really you’re just there for the food and/or to admire the red plaid wallpaper.

Presumably, Lazy Bear expects people to get as drunk as I did, because they provide a booklet of their menu items for diners to take notes on what they’ve consumed. Chef Barzelay and I may share a love of anagrams, but I was not coherent enough to articulate just how truly phenomenal the dishes he served were. Thus my observations include such remarks as, "chef recommends eating it," "smells hella good," and "could use more salt overall?" You can see for yourself in the pages from my booklet below.

1) Apparently I had some suggestions about how to go on a first date to Lazy Bear, as well as a failed attempt to solve the anagram of the Chef’s name.

2) My review of the bread is not particularly groundbreaking, but it is, at the very least, legible.

4) At this point I start doodling, and alerting myself that I’m getting drunk. It seems I tried get in on being fancy by using the word “mouthfeel.”

5) Handwriting and spelling starts to deteriorate around the time the lamb is served. I warn potential readers that the wine pairing is for experts only. And what happened in Rio Vista? Who knows.

6) By the time the last 2 dishes are served I can only muster a scrawled, “I don’t like booze.” Unfortunately you’ll have to find out about the treats on your own.

7) Finally, stuffed full of food I was too drunk to appreciate, I thanked myself and created my own rendition of a lazy bear.

Almost $150 later—on a meal that was supposed to be free—I still give Lazy Bear a 10 out of 10. Not only did they serve an exceptional meal, but they did so in a unique format that defied what I had expected to be hipster nonsense. Next time I go, I’ll bring at least one friend and have at least four fewer drinks.