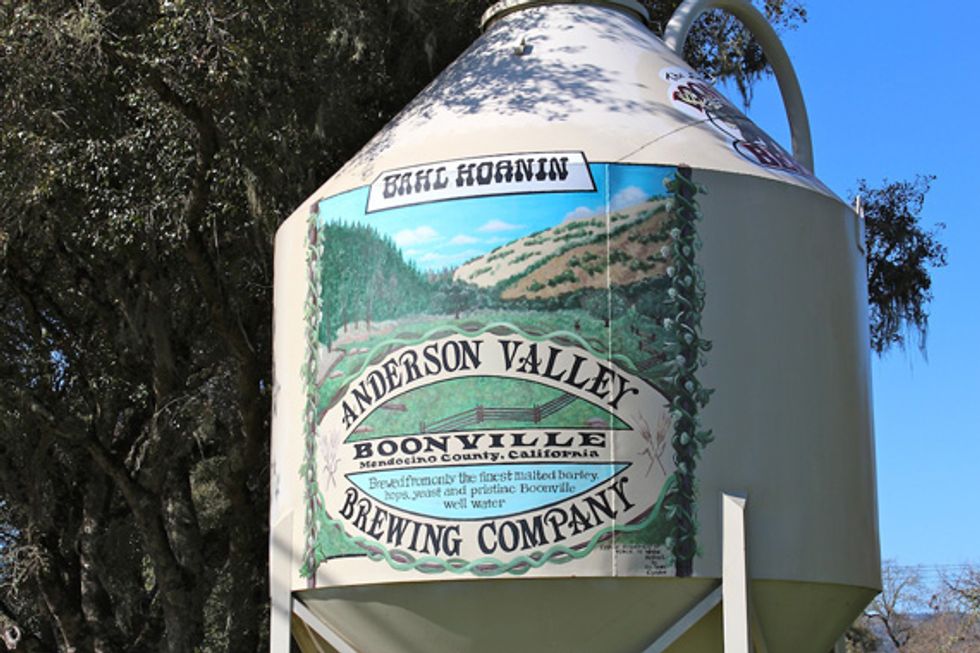 A Quirky Brewery Tour Up North in Boonville

Beer is inherently quirky and our culture only amplifies it, such as the fact that amidst duvet covers and juicers at Bed Bath & Beyond, you can buy a home brewing beer kit. It's the theme of many a country song, including Todd Snider's "Beer Run", which as you may have guessed, is about a beer store run. And then there is the town of Boonville, California, home to Anderson Valley Brewing Company, whose mascot is named Barkley, part deer and part bear, but really nothing more than a bear with antlers on top.

The name, Boonville, couldn't be any more appropriate than for a town that's in the boonies, located north of Cloverdale in Mendocino County off Highway 128. And did I mention that they have their own dialect, referred to as Boontling? The dialect includes words like “pike,” which is translated “travel,” and “madging,” which means to visit a brothel. There are different stories of how and why the dialect came to be, but you're not likely to hear people speak Boontling outside of the old-timers. But, if you do hear someone refer to something as a “rotten boo,” they are talking about a potato, and not your girlfriend.

Cost of admission for a tour of Anderson Valley Brewing Company is $5 and takes place daily at 1:30 and 3 pm. Tours begin in the tap room and include a tasting ticket for two beer samples that can be enjoyed either before or after the tour, which takes visitors onto the floor of the brewery to see where the magic happens. Many visitors have their tasting afterward and then shop around the tap room, which has AVBC apparel, as well as a beer refrigerator. Visitors can also take a glance at the Boontling reference books to practice their Boontling. Make a day of it at the brewery, since it features an 18-hole disc golf course. Course fees are $5 and includes $5 off any retail purchase of $10 or more.

Anderson Valley Brewing Company's headliner is their Boont Amber Ale, their most widely-distributed and award-winning ale. This well-balanced ale has a history dating back over 20 years. Following in line with other craft breweries, AVBC has recently begun putting their amber ale in cans, as well as bottles. Anderson Valley Brewing Company also brews a couple IPA beers, an oatmeal stout, and a pale ale. They also have a couple Belgian Abbey styles, Brother David’s Double and Brother David’s Triple. Both of these brews pack a punch with twice the ABV of your typical beer.