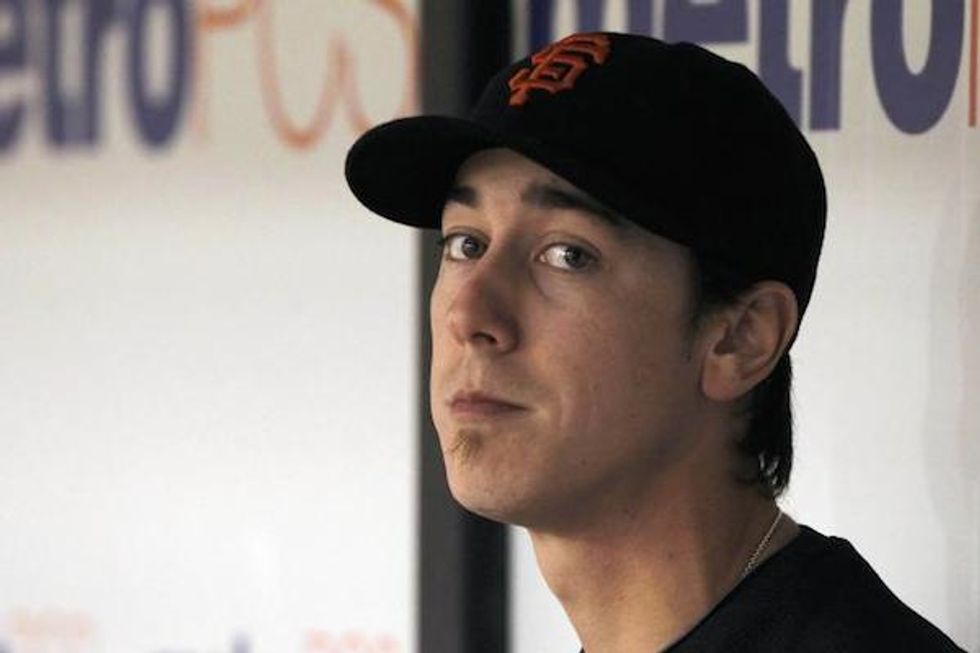 When the dust settled after a busy offseason, it became clear that Tim Lincecum would not be part of the 2016 Giants' rotation. When the ribbon was cut on renovations at AT&T Park, Timmy was waiting awkwardly from an undisclosed location in Arizona. For the first time since 2007, Opening Day had arrived and #55 wasn't wearing the orange and black. He wasn't wearing any uniform. So, I sat down to write about what it meant to me to grow up in the Era of Timmy.

Every young man has a complicated relationship with his favorite professional athlete. We idolize them for their supreme physical gifts and expect perfection from them on and off the field. For me, that athlete was Barry Bonds. Yeah, complicated. When Bonds got busted in 2007, I was just 15-years-old. I decided I would seek a new hero. I was at an age when idols still mattered, and someone had to fill the void left by the controversial end to Bonds' career. The transition was smoother than I expected.

It all began with a drive to Stockton with my dad to watch the Giants' high-A affiliate. It had become a tradition. We'd travel to San Jose, Stockton, Sacramento, or Modesto to watch future Giants fight for their baseball careers under the dim minor league lights. Through the years, there were names like Frandsen, Schierholtz, Timpner, and Martinez-Esteve. I was sure they'd all be stars, but while some had decent big league careers, most slipped into obscurity. Instead, we went for cheap tickets, cracked bats, and tri-tip sandwiches. I remember long drives home with my dad listening to KNBR as I drifted off in the front seat after an extra-inning game.

And then one trip was different.

One Friday afternoon, we sat through bumper-to-bumper traffic on I-580 in Tracy. Now, that's not something you do for mediocre barbecue and cheap seats. Nope. We were going to see Tim Lincecum. He had been the Giants' first round draft pick earlier that summer, and the guy had more buzz surrounding him than any prospect in recent memory. We arrived in the top of the second and settled in a few rows behind the Giants' dugout.

Minutes later, Lincecum took the field, and suddently the standard pitching vernacular melted away—common descriptors did not apply to how Lincecum threw a baseball. From his first warm-up toss, he was rhythmic and graceful, but also violent, even rebellious. He was 22 years old and unencumbered, with the sole purpose of catapulting a baseball as hard as his 5-foot-11, 170-pound frame would allow. There would be no drifting to sleep on that ride home. I was awestruck, and wondering how long I'd have to wait before I would see Lincecum pitch in San Francisco.

Four years later, in August of 2010, my mom announced that Tim Lincecum and I were "cosmically connected." That was her way of saying that our fates were somehow tied together. I was the pitcher on an amateur baseball team, and that summer, I forget how to throw a baseball. That's not hyperbole; I had "the yips." Each outing, I would walk a few batters (at times without throwing a strike), and then be replaced. Game after game after game. It wrecked me. I got a landscaping job and spent every penny I earned on a sports psychologist. Nothing helped.

My mom took solace in the fact that I was not completely alone. Lincecum had finished that August, at the onset of a Giant's playoff push, with no wins and five losses. The worst month of his career. Somehow seeing my favorite pitcher struggle gave me a reason to believe that I could find my way back into the strike zone.

That October, Lincecum would rediscover his form. To kick off the Giants' World Series run, he spun a two-hit, 14 strikeout—a complete masterpiece. One of the greatest performances in Giants' post-season history. And slowly, I remembered how to throw a baseball.

Three Giants World Series wins later, it's now 2016, and I'm working part-time at an appliance parts warehouse near Seattle while I train at a nearby facility, getting in shape for my next season playing professional ball for the San Rafael Pacifics. I often eat lunch with an eccentric co-worker of mine, George, who loves to ask questions about baseball; his knowledge of the game earned mostly through his baseball card collection. "Wasn't much of a fan of the sport, but the cards were a fun investment," he tells me as he licks the foil lid from his afternoon yogurt. "A hobby that might make me a little money some day." He asks me my favorite player.

The next day in the break room, George reached into his pocket and pulled out three baseball cards covered in protective plastic. There's Tim Lincecum. He's got a Topps from 2010, an Upper Deck from 2009, and lastly, an Upper Deck Tim Lincecum Rookie Card.

He looks so young, I think to myself. Timmy is about as old in those cards as I am now.

"They're for you," George says. Underneath my sweatshirt, I can feel the hair on my arms stand up. I'm filled with immense gratitude, imagining the effort it takes, after eight hours of picking and packing, to search through box after box of baseball cards, looking for just one name.

On an afternoon in late May, I'm sitting in a coffee shop on Fourth Street in San Rafael. I'm chewing on a piece of ice and reading On the Road. An older woman sits down at the table in front of me. She's wearing a Giants' hat and carrying a few plastic bags.

"Can you believe how well the Warriors are playing?" she asks, with the voice of someone talking to an old friend. I lift my head. "Who? Me?" But of course she's asking me, the guy sitting next to her wearing a Warriors hat. I recover quickly enough to make a comment about how fun they are to watch. Soon, we're each sharing our favorite Stephen Curry moments from the past few weeks. I'm smiling. By now, love for Steph is as ubiquitous in the Bay Area as dead lawns and tech start-ups.

"I love his graciousness," she says. "It radiates from him, you know? The way he plays. How he carries himself." I close the book. We are both smiling now. It's one of those rare moments where it feels like a professional athlete has achieved exactly what he or she is supposed to. "You know who Curry reminds me of?" she asks. Somehow, I do. But I want to hear it from her, so I wait. She says:

Michael Kershner is a professional pitcher for the San Rafael Pacifics. He named his dog Timmy, after Tim Lincecum.