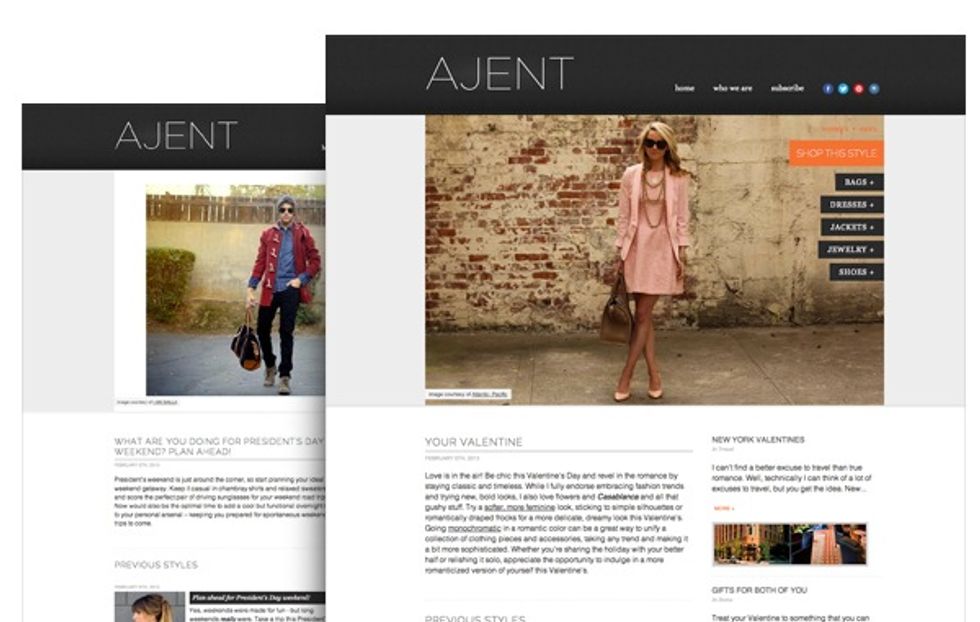 Meghan Higney, who just launched a new website and email subscription service called Ajent, which curates style content and product offers, has one of the more dramatic founder’s stories I’ve come across lately.

“I was outside, wearing heels and my feet hurt. I sat down on a ledge and fell backwards some distance to the concrete. I crushed four vertebrae in my back and was bedridden the next two months.

“Lying there in bed day after day, looking my laptop I realized just how many emails I would get that were not work-related or from friends. There was too much clutter! That’s when I came up with the idea for Ajent.”

She left her job in finance and started tackling the problem.

“Over the past five, six years there's been a proliferation of sites, flash sales, daily deals, discount sites. There is no way to stay on top of all that clutter and know what is ‘in’ in fashion, home decor, and travel. And from the retailers' perspective, there is no way to really engage people, either.

“We call it Ajent (pronounced ‘agent’) because everyone could use a personal style agent–a virtual stylist of sorts. Our editors pore over content and bring an editorial selection of the best products and deals every day. People have told us it is useful to see this content all in one place.”

This editorially selected content targets young, fashion-savvy women and men, busy professionals who “like to live, dress and travel in style.”

Each daily theme or look is presented at three price points – “splurge, staple and steal” for both men and women.

“There are so many sites out there that can find extreme deals,” she explains. "We scan hundreds of websites, emails and blogs a day and track thousands of brands. We point you to those sites for purchase, so we drive traffic to them. We will find the site that is perfect for you that you never would have found for yourself.”

Before launching February 4th, Ajent engaged in a short beta-testing period with about 200 users, focusing on A/B testing to optimize for what those users found more useful and attractive.

Higney is an advocate of “The Lean Startup” philosophy of launching a minimum viable product and then iterating on the basis of closely studying the data generated by actual users. The SF-based team is now working on mobile apps.

“We don’t think of ourselves as a traditional ecommerce site,” says Higney. “We have no inventory, but we are opening up a market. You may have a latent taste, and we offer you a route to discovery.


“For consumers, the landscape has changed so much.”

As for those heels she was wearing that day she broke her back, Higney says they are still in her closet.