How Moving to Oakland Has Changed Woodworking Maven Aleksandra Zee

You may have seen the work of Aleksandra Zee at the Kimpton Buchanan Hotel in Japantown, the Joshua Tree House, West Coast Craft, and almost certainly on Instagram. She has tirelessly worked for the past seven years to turn her passion into a full time job; and in just the past three years her dream became a reality. Within that span of time, Zee's signature chevron wood artwork has shifted and transformed, pushing beyond the boundaries of what she (and we) had become so familiar with. When she moved her studio, and then her apartment to Oakland, things changed again.

"It all started in the basement of my old apartment in the Mission and has grown to fill a 800-square-foot warehouse in Oakland," says Zee.

Moving her workshop was just the first step, and an "adventure." Her space was in a condemned building and finding an affordable space quickly seemed impossible. She and her studio mate, Kate Gong, quickly found a space in Oakland that they later realized wasn't conducive to their needs. Luckily, their landlord had just purchased another building just a few minutes away. When she saw the exposed brick, large, exposed windows and a welcoming environment, she knew it was the one.

"When I walked into my current space, I gasped. It was the most beautiful space I had ever seen and we would be the first tenants in and could pick where we wanted to go. The price was perfect and the energy that theses walls held filled my entire being. This shop has been perfect ever since I moved in; and every single day I get goose bumps walking into work. I can't believe this is my life and I get to create here."

From there, she slowly began to gravitate to Oakland's pace of living and decided to leave her Mission home of seven years for a Lake Merritt apartment just minutes from her studio.

"The space is beautiful—the sunlight and the Moroccan vibe of the 1920s building is stunning. Being inspired by where I live is so important to me and this was for sure the place. And my commute is literally five minutes." 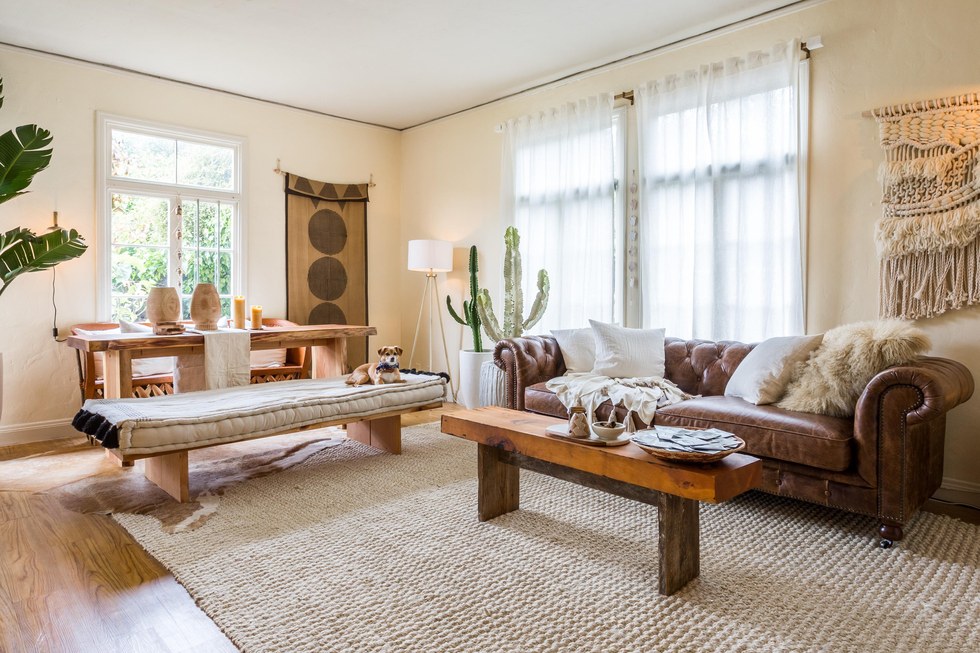 We know who's house this really is...a tiny Jack perched at the dining table. Wall hanging by Block Shop Textiles 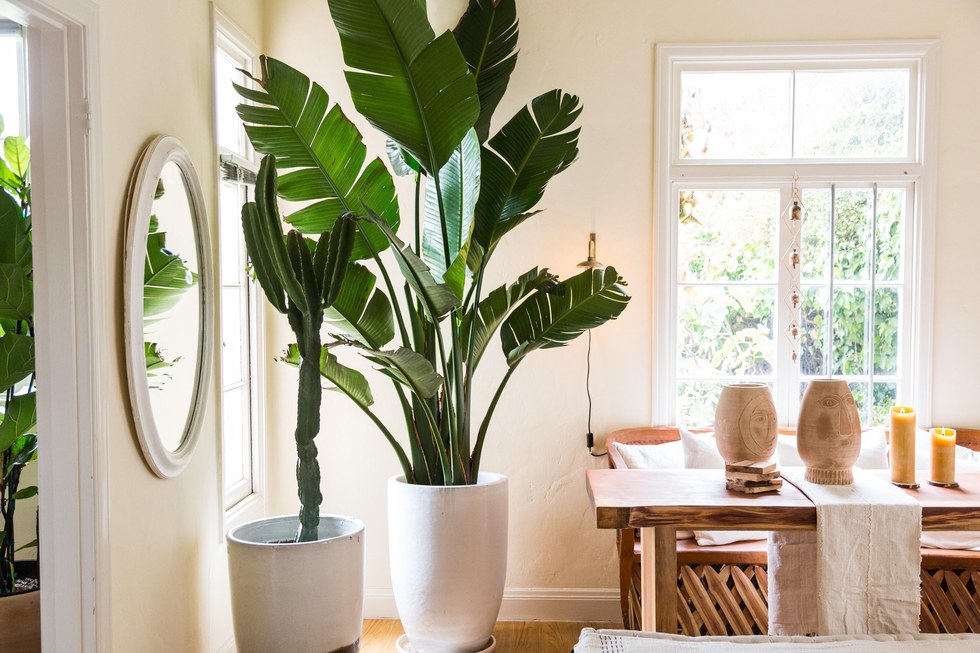 It's a jungle in here 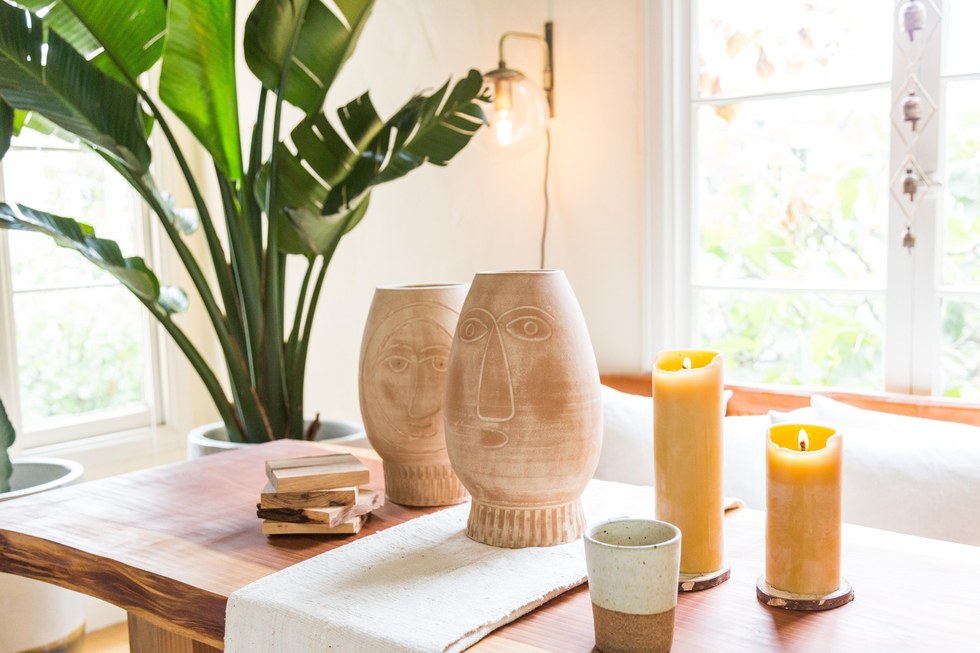 Bert and Ernie and a cup by Sam Lee 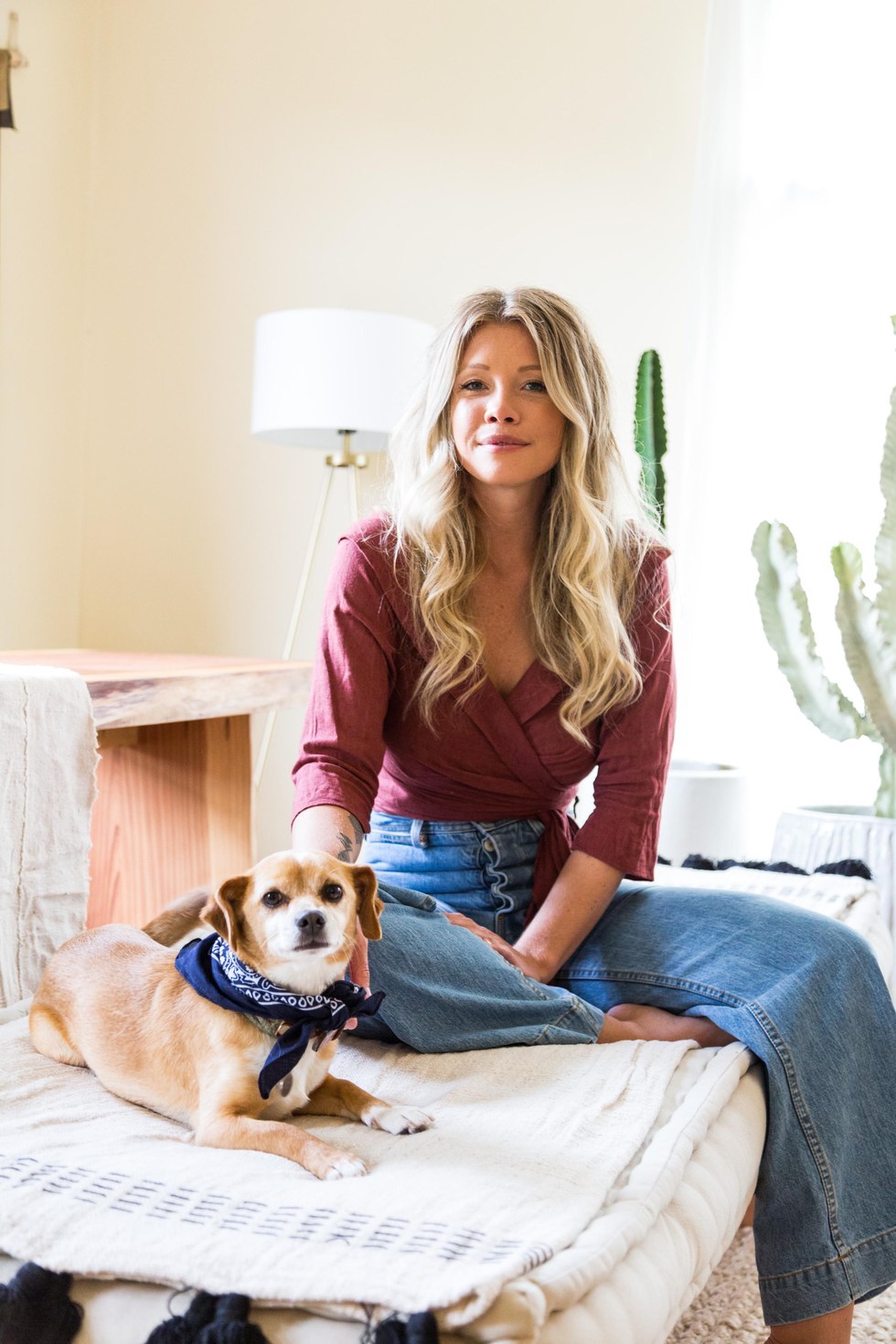 Jack, stealing the show in his new bandana 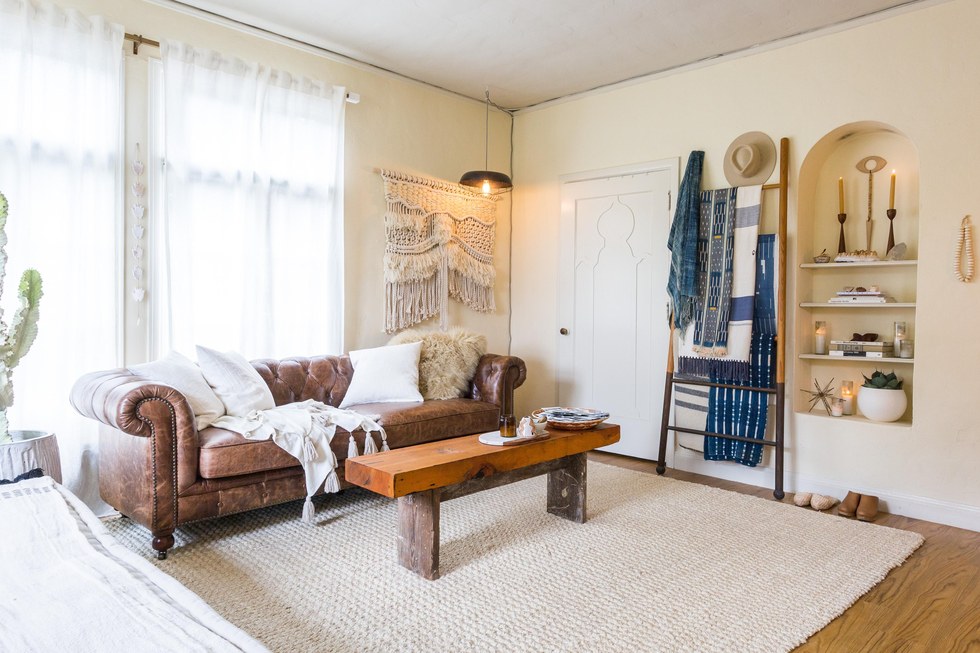 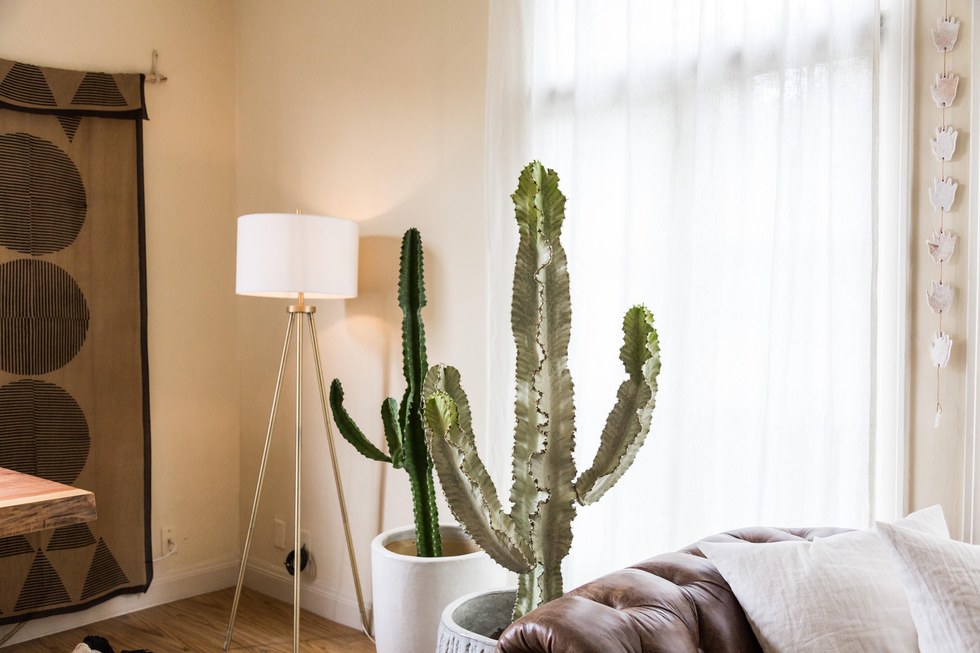 Just a pair of cacti 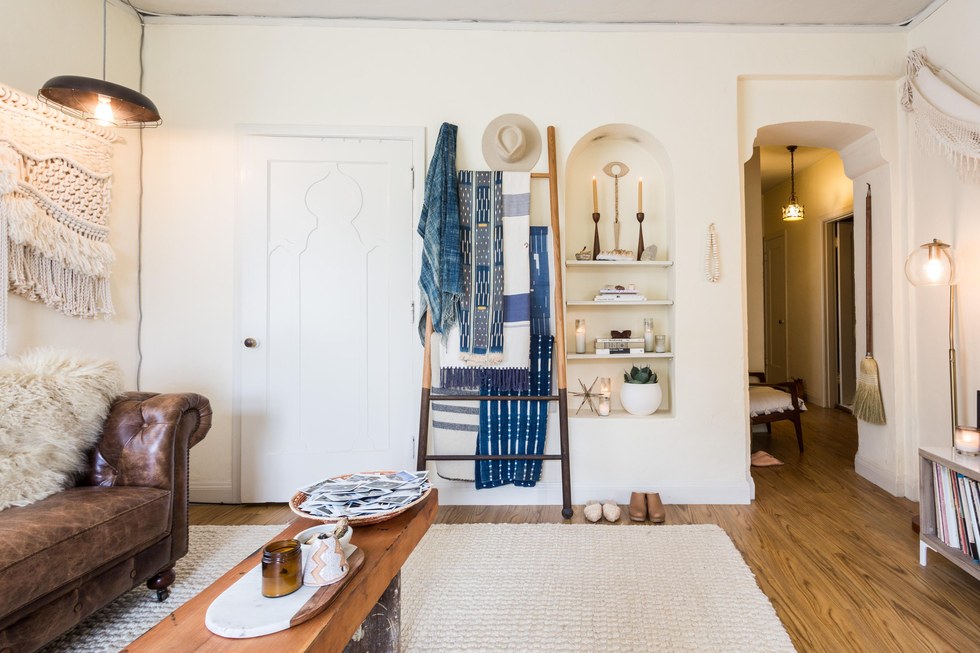 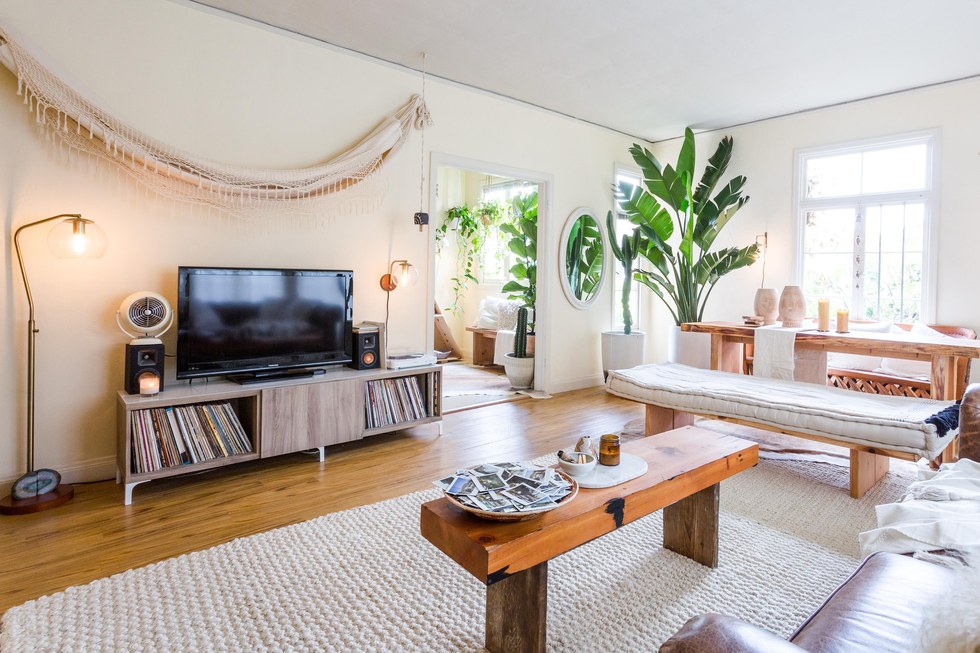 View from a living room corner 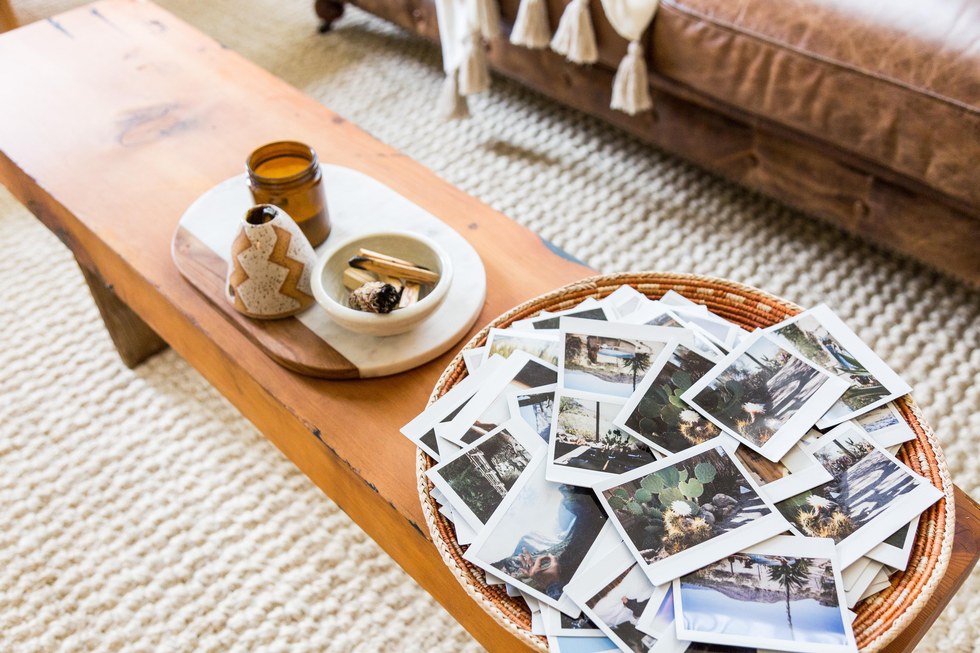 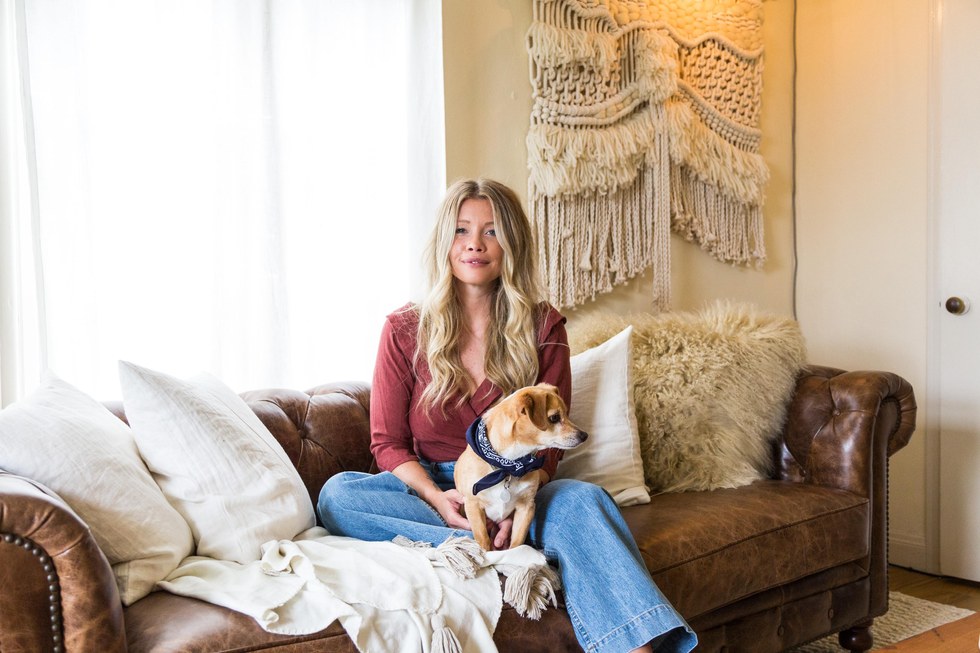 Zee and Jack cozied up on the couch 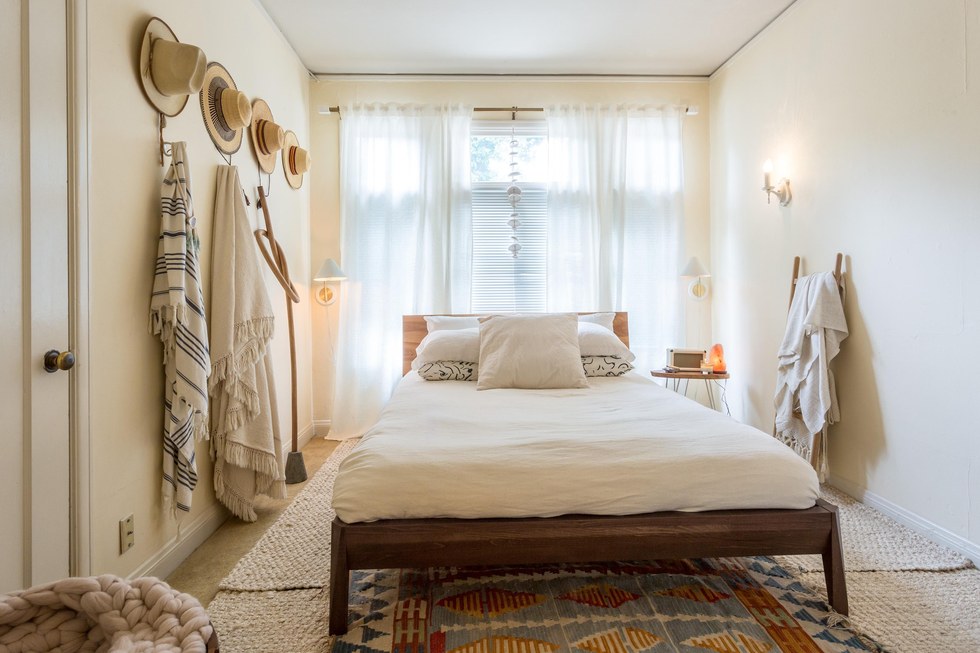 The coziest bedroom with pillows from Gravel and Gold 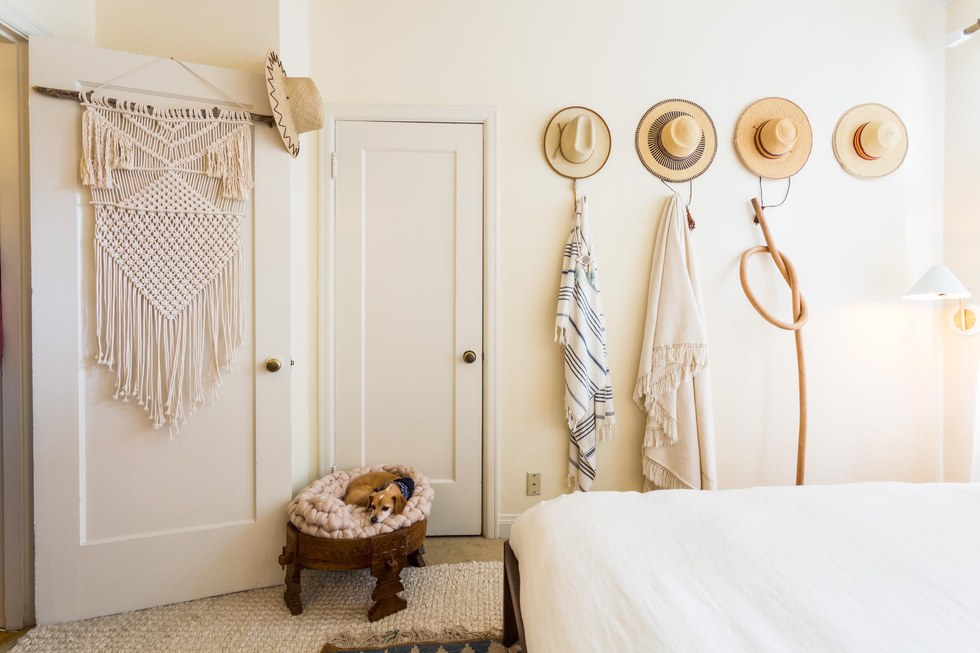 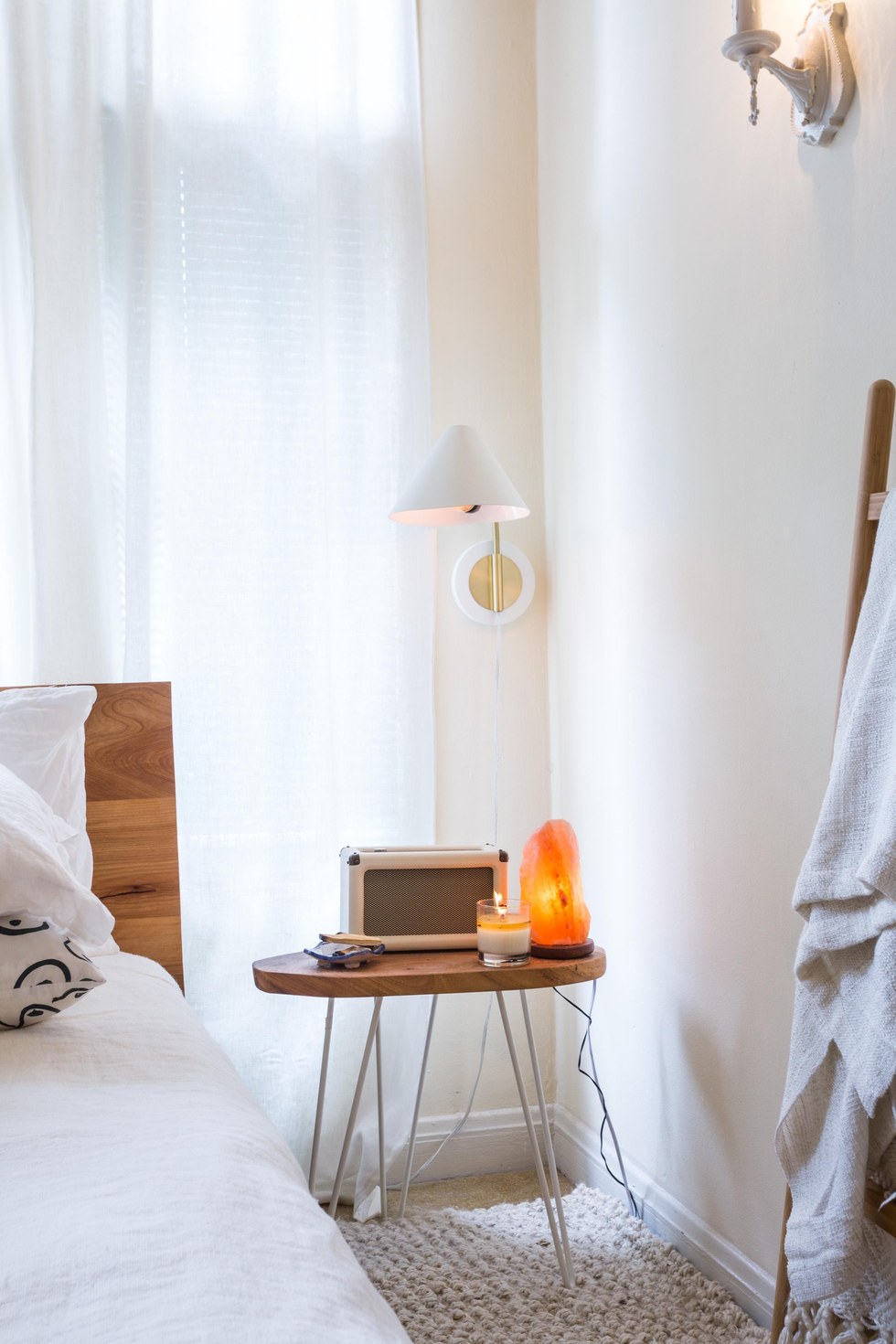 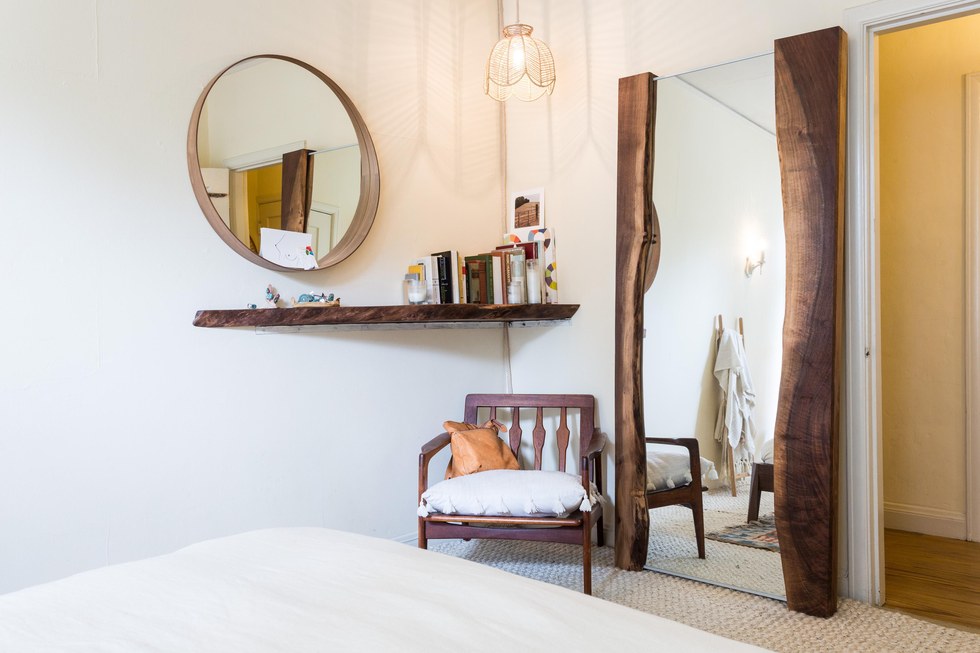 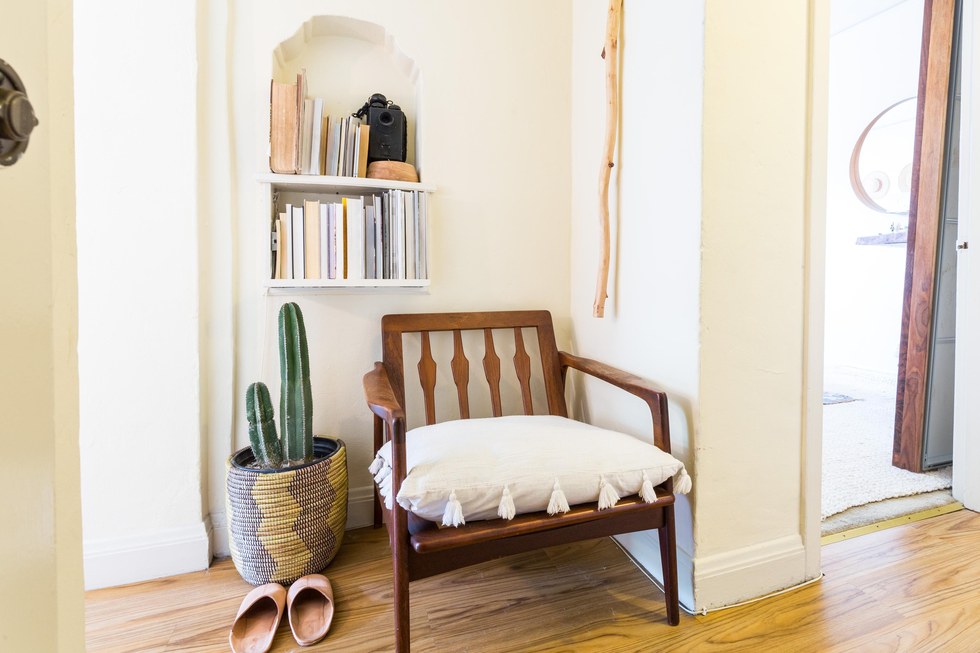 Reading corner with a midcentury chair Zee found in the street 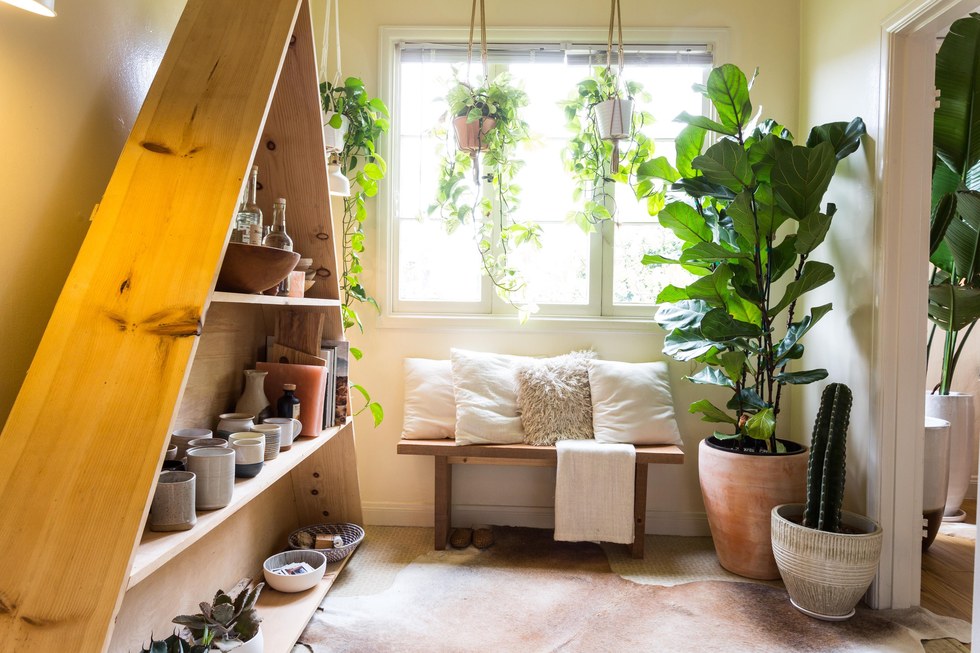 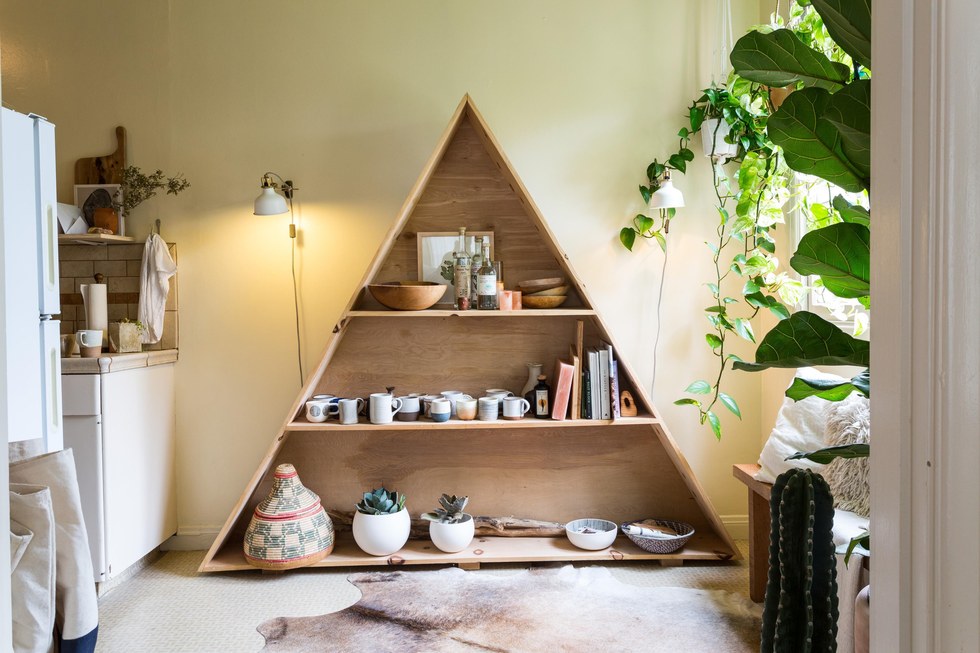 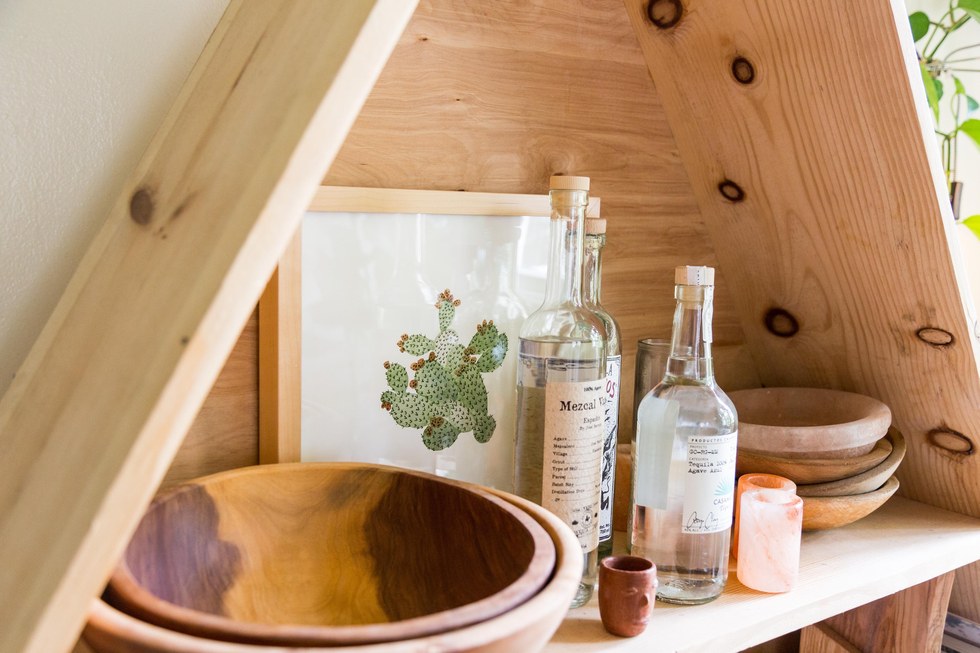 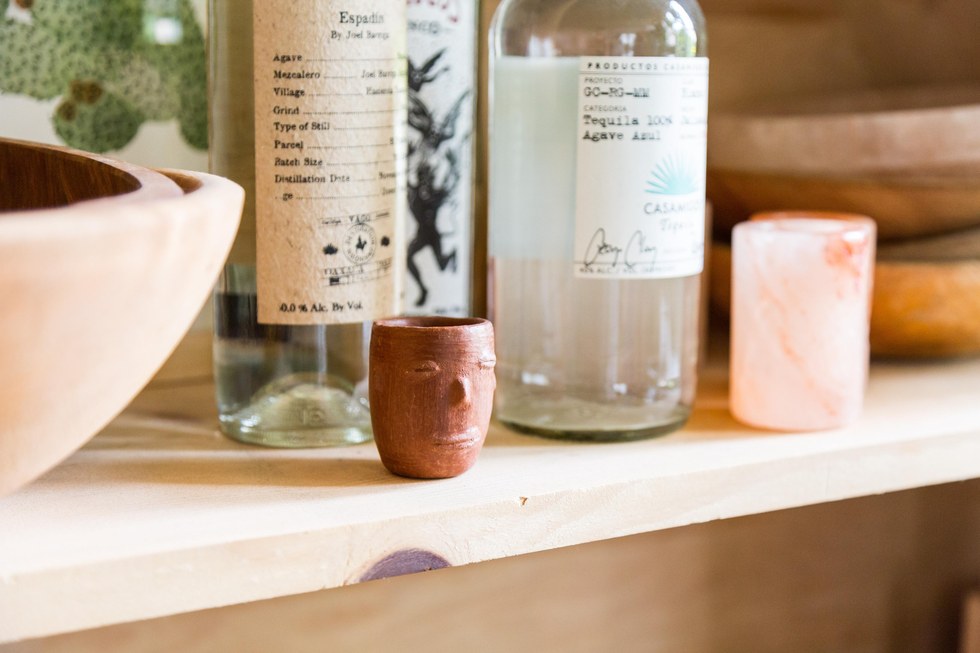 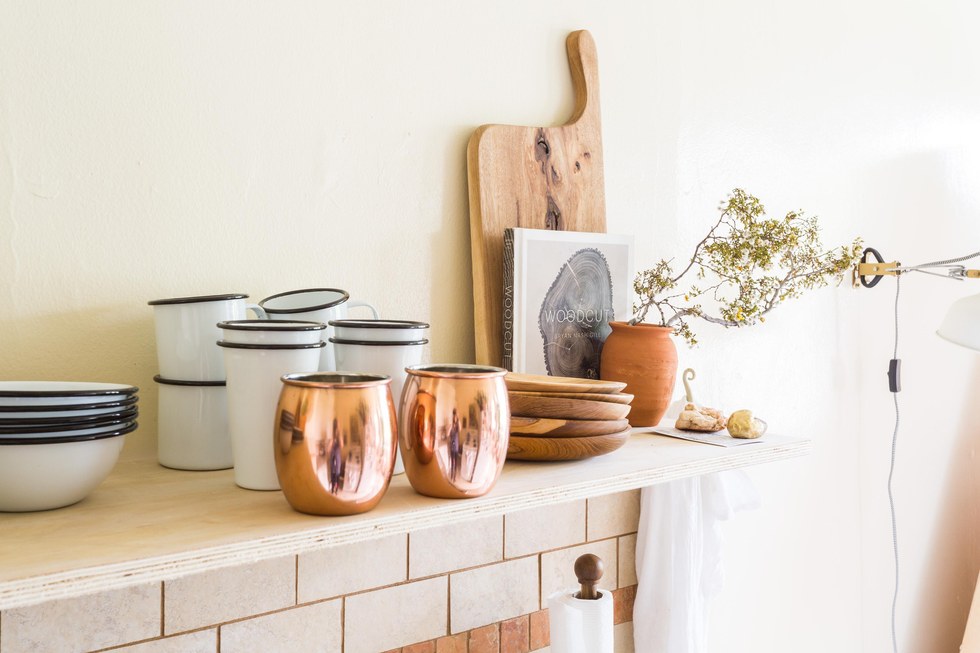 Kitchen essentials on Zee's above the sink kitchen shelf 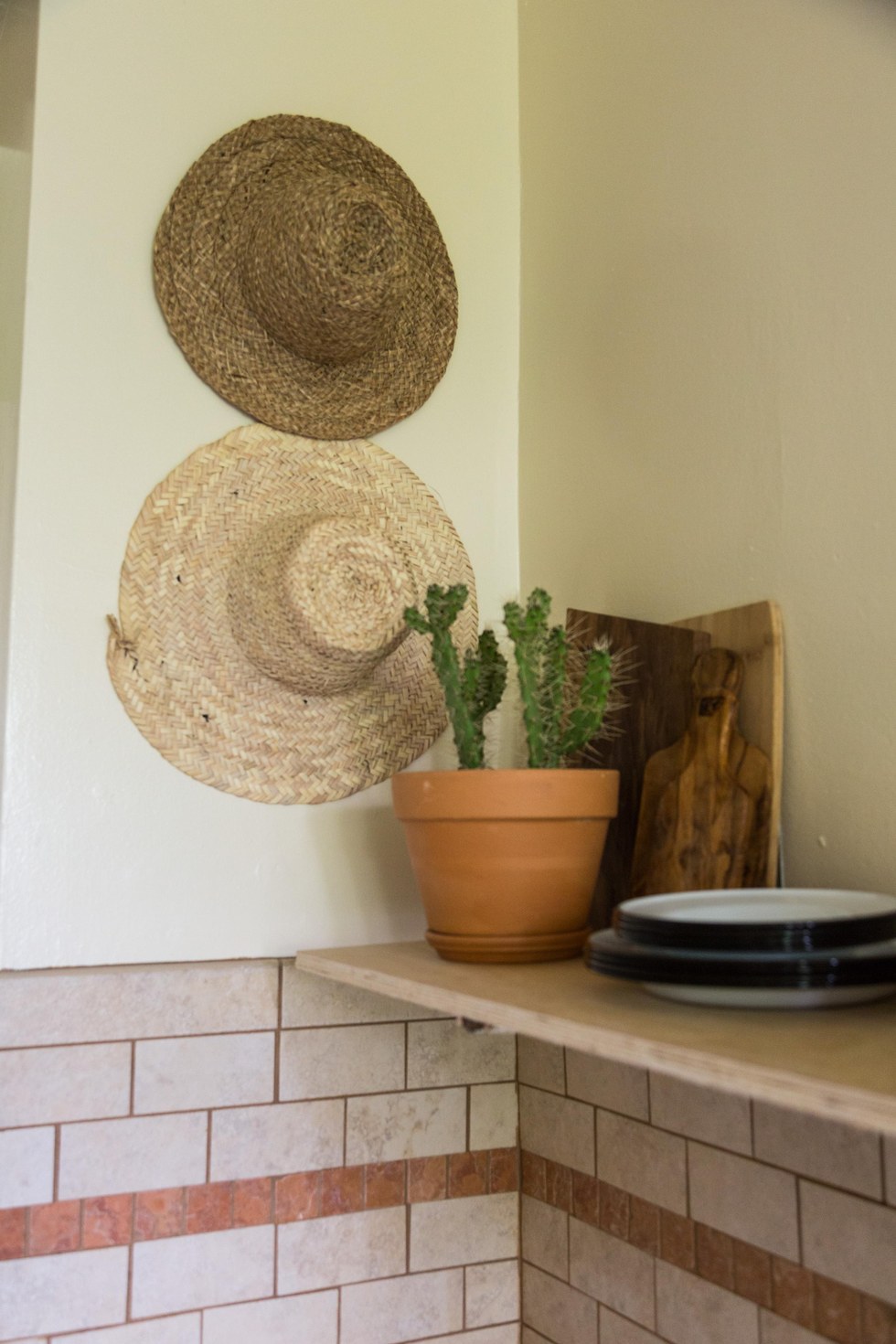 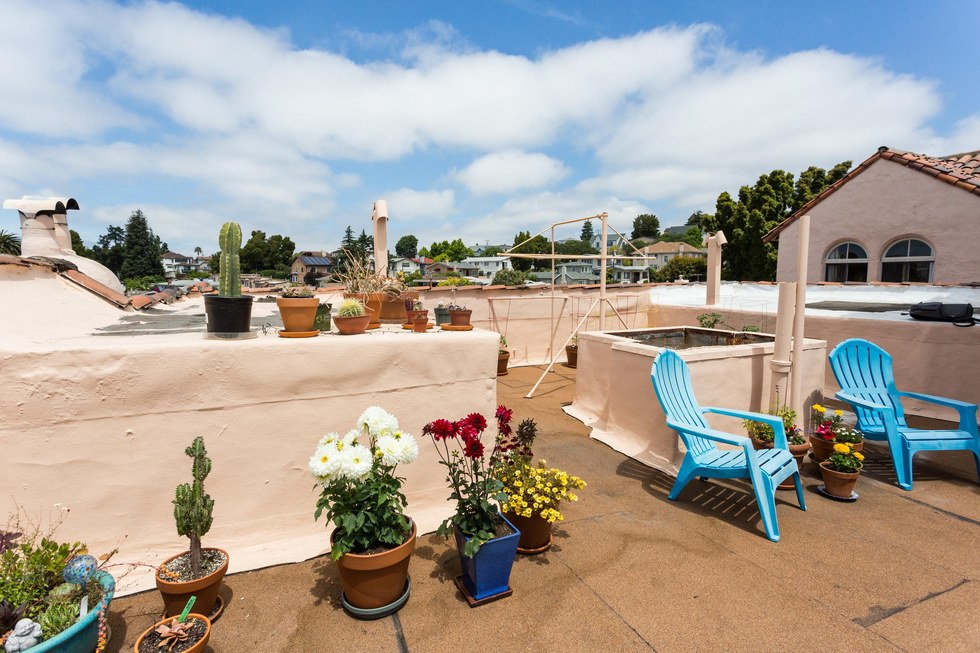 The roof of Zee's building where tenants gather and contribute plants 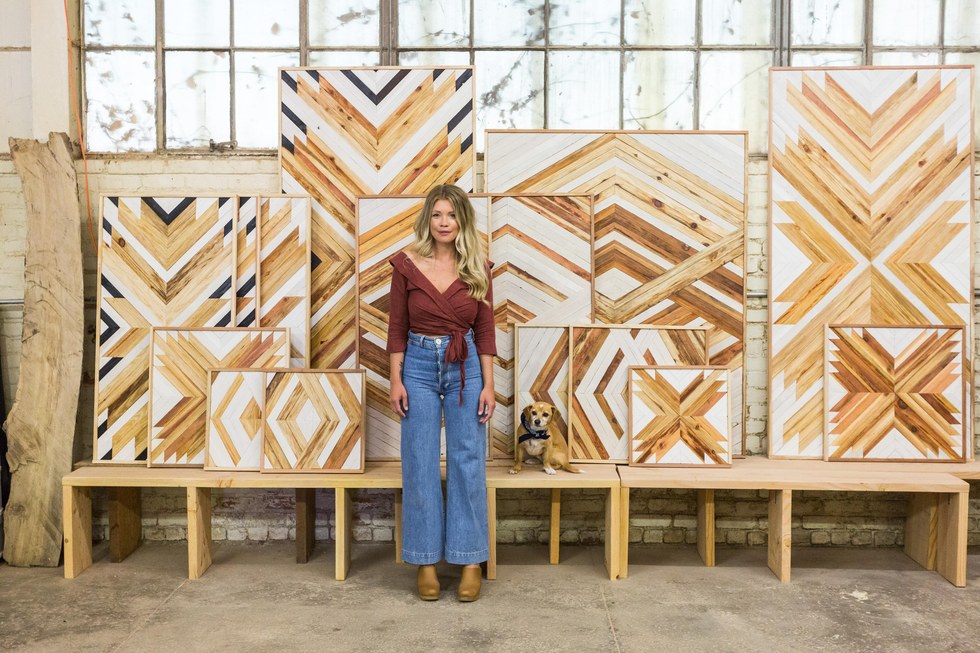 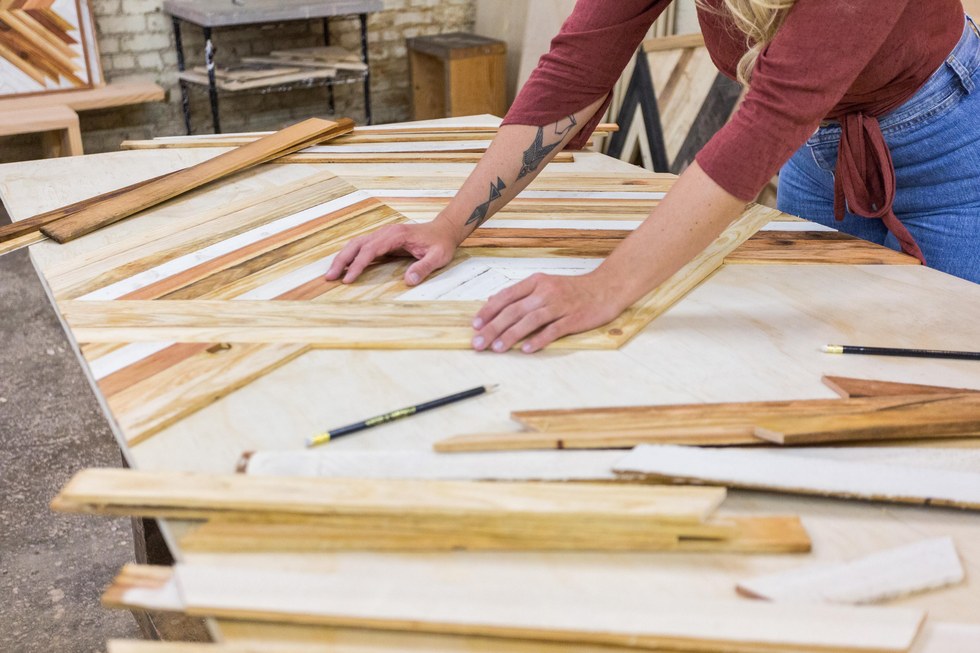 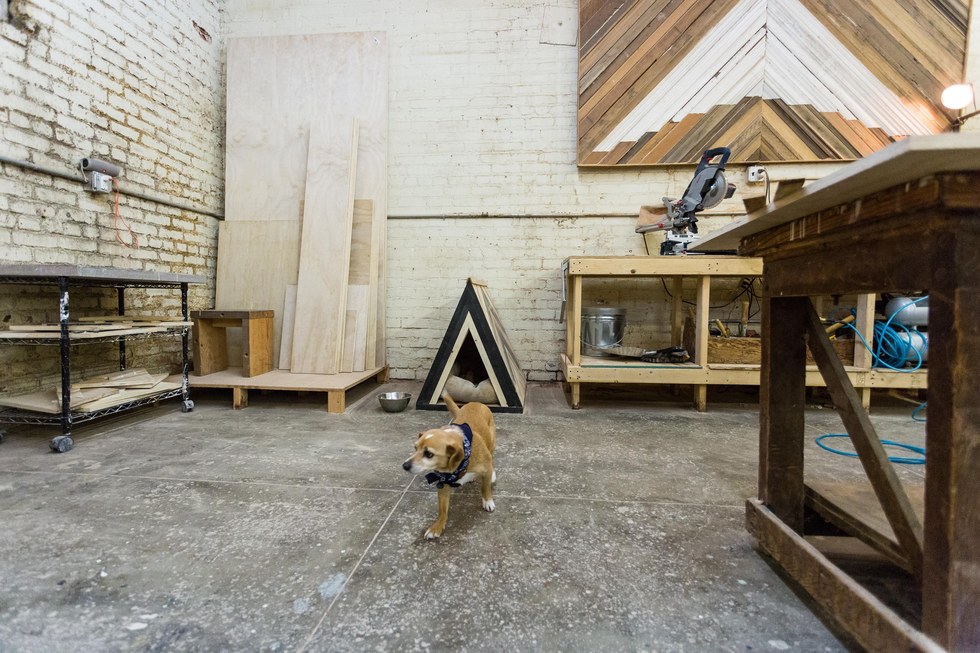 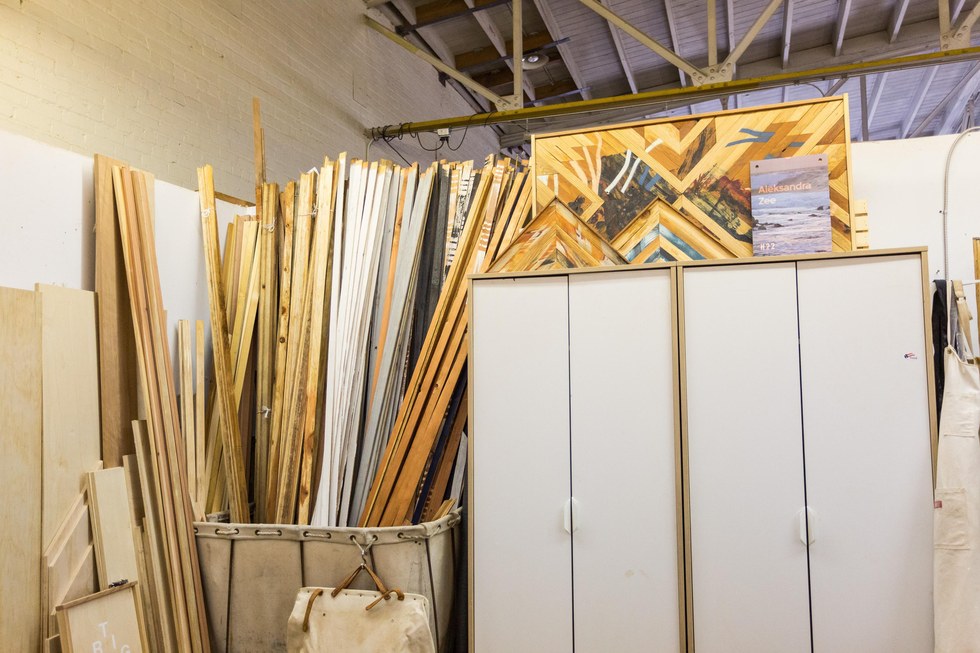 With the appeal of cheaper rent in Oakland has come the influx of artists that can no longer afford to live in San Francisco. It feels like a revolution even of creators inventing their own way of living, building up warehouses and art spaces to make live/ work situations and galleries. This robust creative culture is where Zee credits her newfound inspiration.

"The art community in the Bay Area is like nowhere else I have experienced. It is rooted in collaboration and exploration and sharing."

Her art has taken on a new 3-D dimension, and she has begun collaborations with artists there including Heather Day and Searoon Succulents. Beyond the physical adaptations, the move has also shifted her state of mind and allowed her to plunge fully into her craft.

"Living in Oakland has brought an element of peace to my practice," Zee says. "City life is always buzzing, always moving, and being present in that lifestyle is sometimes a challenge. The slower pace in Oakland has allowed me to really take the time to calm my mind and be deeply involved in my practice."

With the ability to live more in the moment, a facet that she continually emphasizes is crucial to her craft, she's been able to just flow and move into other areas of interest including workshops. Available for groups and one-on-ones, Zee teaches her process and shows her students how to make their own personalized works of art.

"Over the past year, I have completely fallen in love with Oakland, Zee says. "There is an incredible artist community, endless parks for my pup, food is amazing out here and some of my closest friends live out there. I have also become involved in my community and support the rich culture that is Oakland. My goal is to leave a beautiful mark on this town; not change it or take away…just support those that have made Oakland such a fulfilling place to call home." // aleksandrazee.com