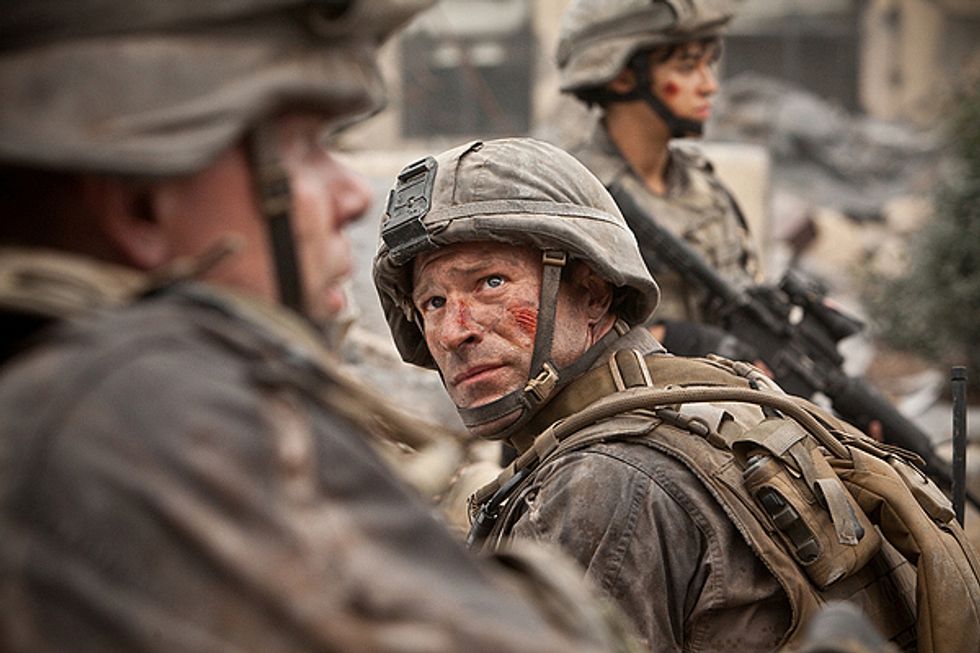 After Independence Day, Skyline and the repeated doomsday threats imagined by TV’s 24, you’d think Los Angelenos would have tired of watching their city reduced to so much smoldering rubble. Christopher Bertolini, author of the alien-invasion thriller Battle: Los Angeles, obviously hasn’t.

While Bertolini indulges in the same patriotic sentimentality as Roland Emmerich’s Independence Day (1996) – Battle plays like a two-hour commercial for the U.S. military, with the rest of the world taking cues from a small platoon of fearless Marines – the movie’s most egregious melodrama is mitigated, somewhat, by star Aaron Eckhart, playing a staff sergeant haunted by memories of a mission gone wrong.

There’s no time for mourning, though, not with meteors descending on Santa Monica and civilians rushing to relocate before they hit. Funny thing about these meteors, though – they’re slowing down before they reach the ground. Oh, and they’re loaded with water-hoarding aliens intent on colonizing earth.

What follows their landing, not just in Los Angeles but also in Tokyo, Hamburg, London and Paris – water be damned, these extraterrestrials clearly have an eye for prime real estate – is all-out war, with Eckhart leading the way and Michelle Rodriguez (Machete), in a curiously limited role, providing helpful tech support.

Rodriguez’s primary purpose is to inform us that the aliens, who shoot first and never ask questions, are controlling their shock-and-awe-inducing air strikes using a land-based mainframe. Can SSgt. Nantz (Eckhart) rescue a handful of civilian stragglers and destroy E.T. headquarters before the invasion derails production of Transformers: Dark of the Moon?

Do you even have to ask? Though Battle offers little in the way of suspense, director Jonathan Liebesman (The Texas Chainsaw Massacre: The Beginning) rolls out the action convincingly, and contributes to the movie’s frantic feel through his efficient use of cameras aquiver with earthling anxiety.

Eckhart, making his debut as a top-billed action hero, lends credibility and surprising depth to a character carrying the weight of too many war-movie clichés. Making Battle: Los Angeles seem fresh might be too much to ask of any actor, but give him credit for putting in an effort befitting the Brave and the Proud.