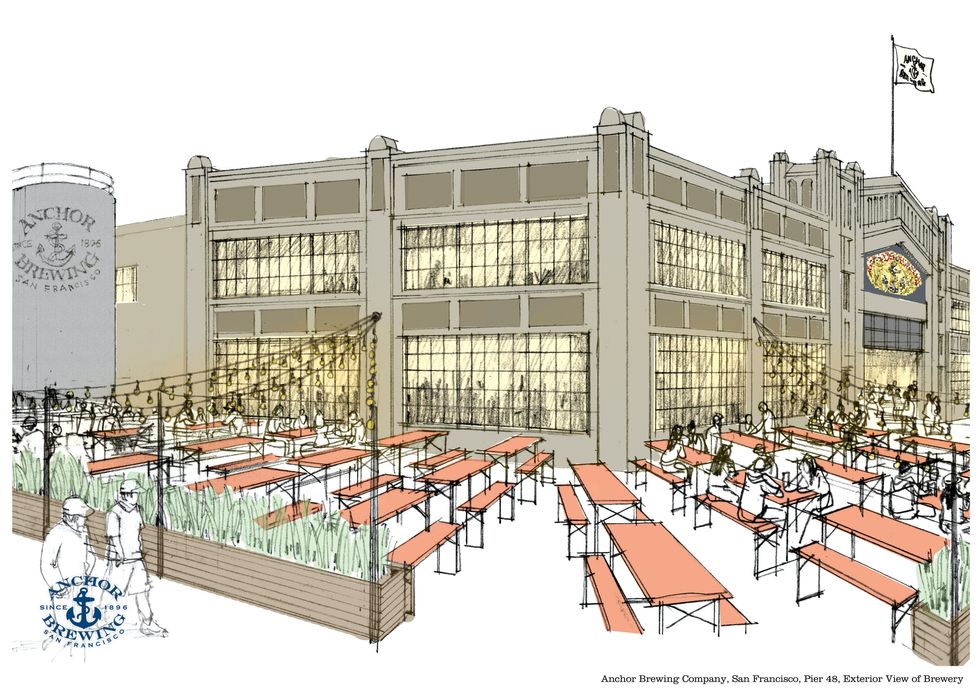 While much of the recent local beer buzz has revolved around the opening of new small brewpubs, two of our older and larger San Francisco breweries are making some big changes.

This Friday, March 20, Anchor Brewery opens The Yard at Mission Rock, an 18,000-square-foot beer garden, pop-up food park, and retail village located in Lot A, at the corner of 3rd Street and Terry Francois Blvd adjacent to AT&T Park. Constructed of repurposed shipping containers, The Yard will include shops and vendors, cultural events, and a public promenade.

The Yard is the first building block for the Mission Rock Development, a new mixed-use urban neighborhood, where Anchor will construct a world-class brewing facility. While Anchor will maintain its iconic Potrero Hill brewery, the addition of the Pier 48 facility will quadruple Anchor’s annual brewing capacity and also include production facilities for brewing, distilling, packaging, storing, and shipping. The facility will also include a restaurant, museum, and educational facility.

Anchor Brewing CEO Keith Greggor noted, “We are always looking for fun and innovative ways of bringing the community together while enjoying our Anchor beers. The opening of The Yard will allow us to do just that in a whole new way. Giants fans have been enjoying Anchor Steam Beer for years, and now we can provide another opportunity for fans and other visitors to gather to drink Steam and our other beers.”

21st Amendment is also working on a new huge new brewing facility, this one in San Leandro. 21A co-founder, Shaun O'Sullivan, explained the project, “Our brewery will start production at the end of April and is set to start delivering beer in May. We will initially open with a modest tasting room and an outdoor beer garden. This new brewery will have 21 (of course) beers on tap, many that are experimental home brews, and others that are collaboration beers or seasonal drafts that will only be available in at the San Leandro location."

Once the building process is complete, the new space will be decked out with an indoor amphitheater, full restaurant, a raised walkway winding around the brew house, and a "Tree House" bar. And as if that wasn't enough, the team plans to build another floating bar right off of the brew house main deck.