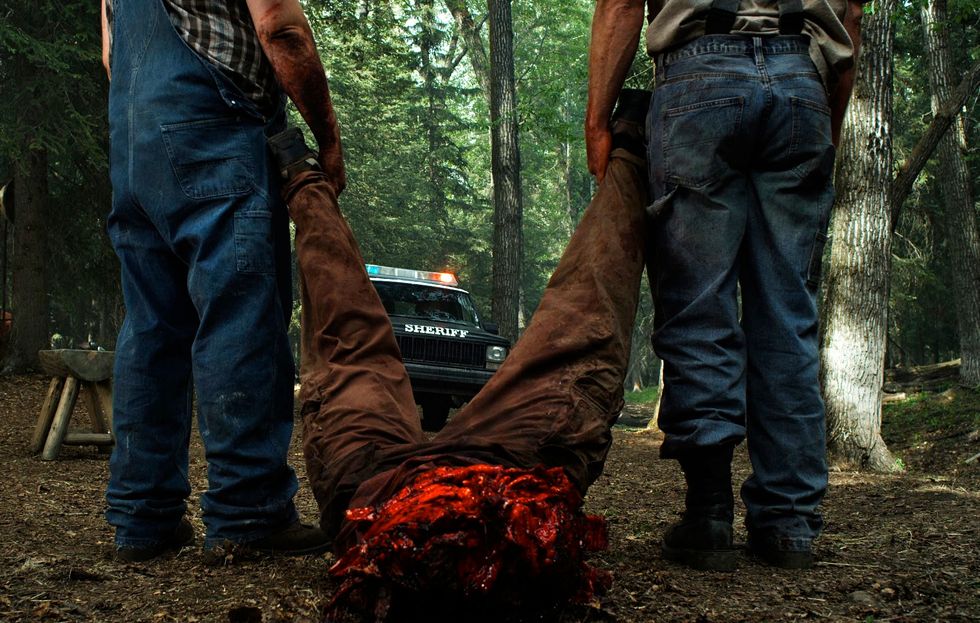 ...And You Will Know Them by the Trail of Dead: 'Tucker & Dale' Earns Killer Laughs

The premise is as thin as the razor first-time feature director Eli Craig uses to draw first blood in Tucker & Dale vs. Evil, his grisly comedy of Three’s Company-style misunderstandings. Mistaken for backwoods murder junkies by college kids on a camping trip, good-natured rednecks Tucker (Serenity’s Alan Tudyk) and Dale (Tyler Labine) set out to kill the newcomers with kindness.

Bad move. Believing themselves the next victims of a massacre, the kids – minus gorgeous babe Allison (Katrina Bowden), whom Tucker and Dale save from a near-fatal dip in the lake – launch a bumbling offensive, presumably to “rescue” her. (Their ringleader, an alpha male wannabe played by Jesse Moss, is mostly in it for the adrenaline rush, but motivations are usually an afterthought in movies like this.)

In short order, the kids manage to off themselves, as their half-witted attempts at self-preservation backfire with spectacular precision, leaving Tucker and Dale confused and slightly offended. Far from denying their hillbilly heritage, they embrace it. But what about their country drawl, dirt-stained overalls and run-down cabin in the forest suggests a pair of serial killers?

Besides their artless stabs at Southern hospitality, and a supremely silly mishap involving a chainsaw, not much. Scared senseless by campfire legends – and possibly one too many viewings of Deliverance, which Craig sends up nicely – the kids are superficial brats, reacting to a perceived threat where none exists. Their comeuppance is harsh, but the movie has a light touch, despite the gore.

It thrives on Tucker and Dale’s winning personalities, and the chemistry so evident in the shrewd coupling of Tudyk and Labine, veteran performers who rarely enjoy top billing but make the most of it here. Craig, who co-wrote Evil with Morgan Jurgenson, breathes exuberant life into the geek show, which aims for laughs and gets them often enough.

Tucker & Dale vs. Evil opens today at the Lumiere Theatre in San Francisco and the California Theatre in Berkeley. For tickets and showtimes, click here.