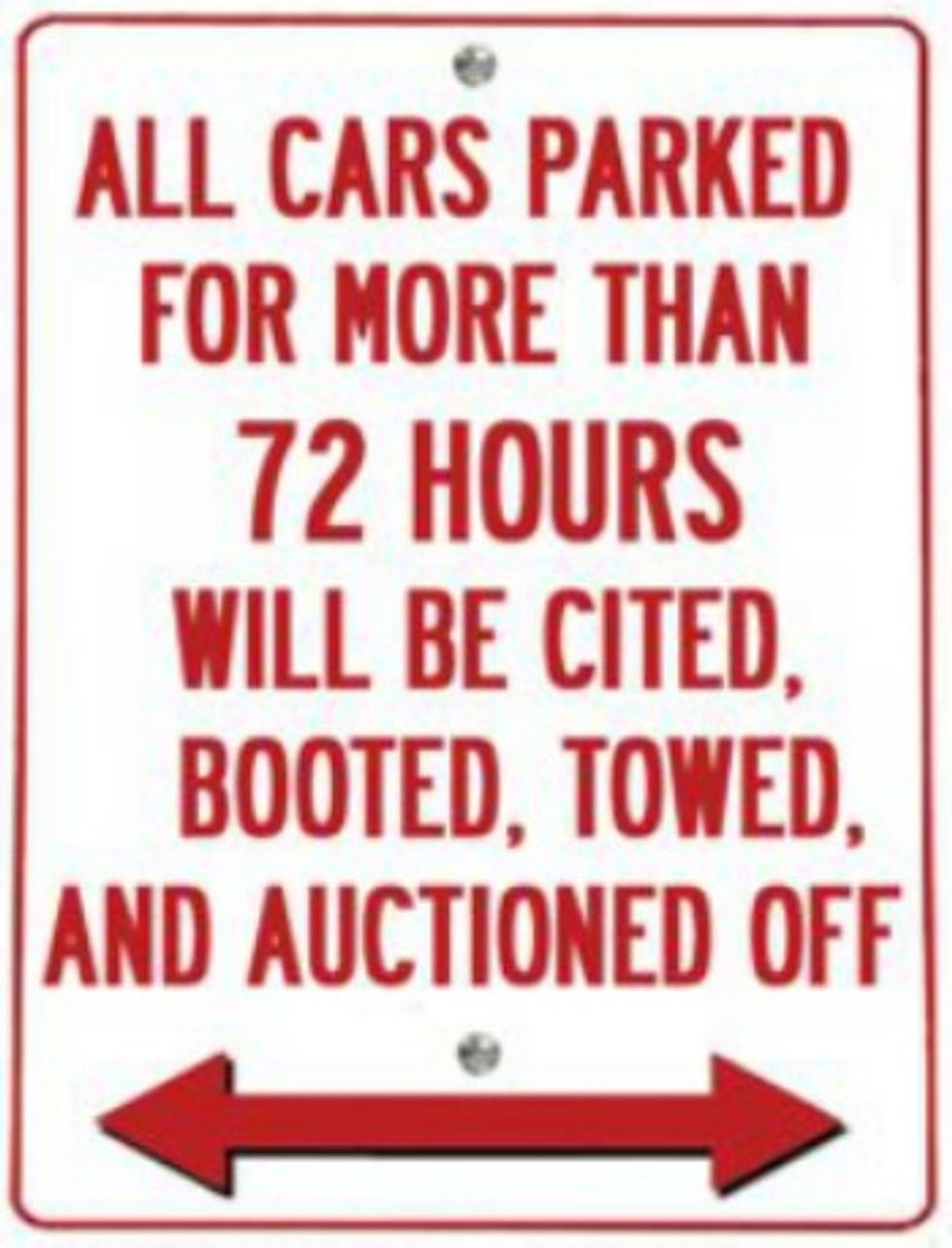 Ask the Parking Guru: Car Was Towed While on Vacation, Can I Contest?

I came back from vacation yesterday and found that my car was stolen.  I made a report and soon thereafter I found that it wasn't stolen, but was towed by the SFMTA, impounded, and had racked up charges in excess of $1700 while I was away.  I was parked in my residential neighborhood, with a valid residential sticker prominently displayed on my bumper.  The people at AutoReturn would not listen and told me to contest the ticket, but said that I better hurry because in two weeks, it will be auctioned off.  I refuse to pay this fine, but am racking up $60 each day that it is impounded. Help!

However, in your specific situation, I don't recommend that you request a hearing because you will lose this one. Unfortunately you have been subjected to the 72-Hour Law, which is perhaps the rudest way of being welcomed back to the City from a vacation.  The sign above is not posted anywhere in San Francisco, but for those who have been subjected to this little known law, it has been burned indelibly into their consciousness and quite possibly into their internal organs in the form of an ulcer or acid reflux.

The 72-hour law applies to all vehicles parked on all San Francisco streets, even if your vehicle is parked legally, with no other restrictions being violated. Every vehicle in San Francisco can only remain parked in one spot for three days (72 hours) in a row, or it is considered abandoned.

Even with a residential permit and parked in the corresponding residential permit zone, and your wheels curbed less than eighteen inches away from the curb, your car can remain parked in one spot for only a maximum of 72 hours.  After that, your vehicle is considered abandoned.  The catch though...is that in most cases it has been reported.  Unless you have a car that has been stolen, stripped, and burned, or in some other way will distinctly stand out to a DPT officer (who sees thousands of cars a day), DPT will not enforce this law.

In most cases, it’s reported by a neighbor who resides close to the vehicle. For whatever reason (maybe it looks like their ex's car and brings up bad memories, maybe it's parked in front of their house in "their spot,” and they consider it an infringement on their property), they reported it.

In order to not become a victim, check on your car regularly, or have somebody else check on it for you while you're away (have them move it during street sweeping days while they’re at it).  Once reported as abandoned, a sticker is placed on it, stating that it must be moved within 72 hours, or it will be towed.  And, once that neon sticker is on your window...it will be towed in 72 hours if you don't move it.

So, if you have a car, and you'd like to save yourself untold hours of panic, frustration, outrage, and hundreds if not thousands of dollars...I recommend staring at the sign above until it becomes a permanent ghost-like image in your mind.

For more tips, tricks, and insider info about how to avoid getting a parking ticket, click here.