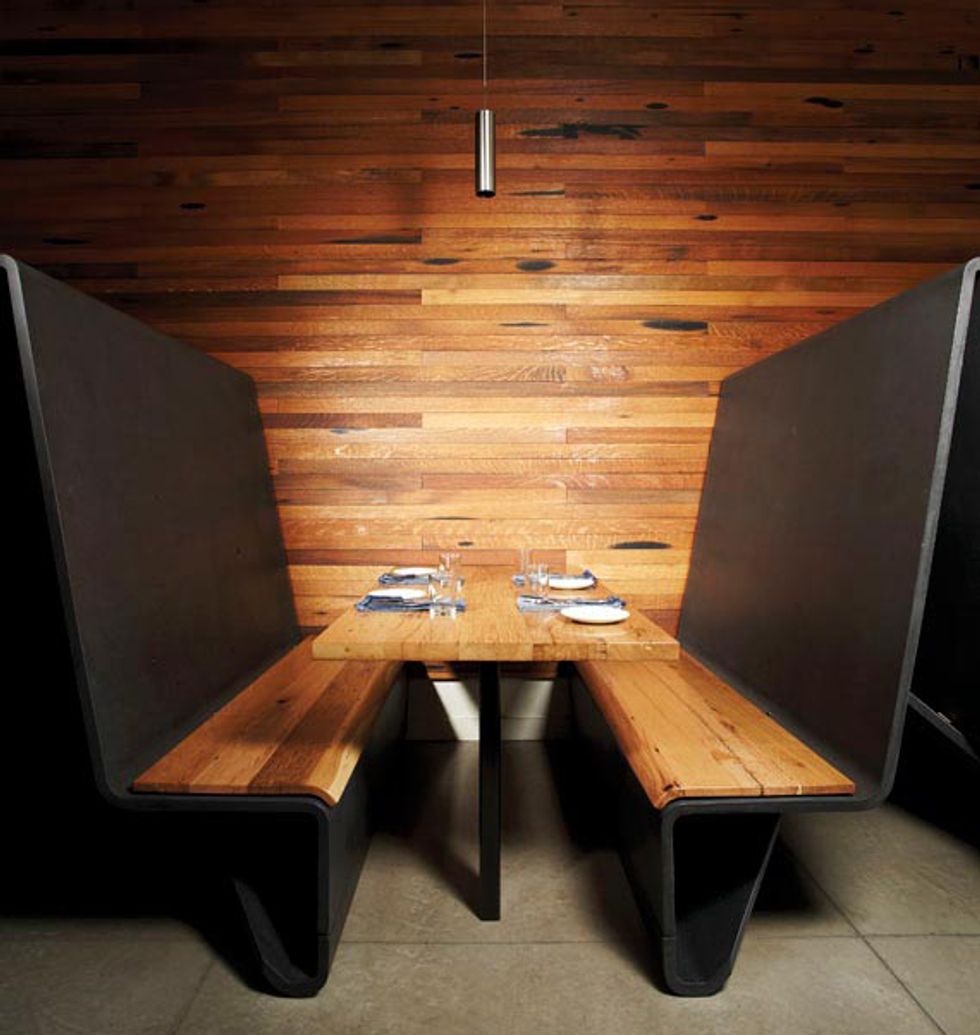 Bar Agricole: How Many Artisans Does it Take to Build a Modern Tavern?

Chefs get all the glory these days, but anyone in the business can assure you that opening a restaurant is anything but a single-handed endeavor. Nowhere is that more true than at Bar Agricole, SoMa’s new LEED gold-certified, eco-perfect tavern. Headed by Thaddeus Vogler, a preeminent and devoted spirits master (or bartender—call him what you will), the modern but casual bar and restaurant opened in late summer after three years of planning. It’s hardly all about Vogler though. He willingly shares the spotlight with a cadre of other talented participants, including visionary architects, urban farmers, woodworkers, textile designers, and glassblowers—even a concrete craftsman. “I knew I wanted the food, beverage and design to be as amazing as possible, to sort of battle each other for center stage,” says Vogler.

(from left) Thaddeus Vogler: owner, bartender and artisan in his own right. Walls lined with reclaimed oak.

The building—formerly an abandoned industrial plumbing warehouse—was taken to new heights by architects at Aidlin-Darling Design. They renovated it in 2009 with Matarozzi/Pelsinger Builders, who own the building and have set up their offices in the structure’s main wing. Before Bar Agricole opened, the building generated buzz, winning numerous design awards (a 2010 Award for Best Sustainable Structure from California Home+Design magazine, a 2010 Re-Skinning Award from Zerofootprint, and a 2010 Grand Merit Award from Remodeling magazine). As the restaurant took shape, it became something of an incubator for a host of local artists and designers. “I needed people in the process with me to have shared sensibilities and be people that I really liked,” says Vogler.

Skylights designed by glassblowers from Nikolas Weinstein Studios are made up of 1,362 glass tubes.

Along the gritty stretch of 11th Street, the restaurant is separated from the road by 1,200 square feet of outdoor space, where a custom fountain by Sebastopol’s Flowform Artisans muffles the sound of traffic. Raised planting beds are cultivated by green-thumbed forager Mark Ellenbogen, who also directs the wine program. Inside, walls lined with reclaimed oak provide a rustic foil for sleek concrete floors, two rough-patterned concrete bars, and the wave-like forms of concrete booths, all by Mark Rogero of Concreteworks in Oakland. The white oak tables and chairs were handcrafted by local furniture designer Sebastian Parker and got their rich reddish brown stain thanks to a past life as turn-of-the-century wine barrels. Most striking, though, are the skylights, the meticulous work of glassblowers from SF’s Nikolas Weinstein Studios. They drip with thousands of fused tubes of clear glass that appear to be frozen mid-breeze.

(from left) Sebastian Parker worked for four months to cut and mill the restaurant’s 60 chairs and tables by hand. Chef Brandon Jew’s sustainably minded food makes its rounds to the tavern’s diners.

The staff uniforms—aprons in pinstriped denim that call to mind a railroad conductor—have a pedigree too: Matt Dick, textile designer and owner of Tsurukichi Clothing Boutique in the Tenderloin created them. Images by SF photographer Thomas Winz hang above the bar, where Vogler and Eric Johnson mix cocktails made from mindfully selected craft spirits. And that’s where Brandon Jew finally comes in—he’s the chef preparing meticulously sourced yet simple food that would make Alice Waters proud—but in the co-op spirit of Bar Agricole, he’s just one of the tribe.