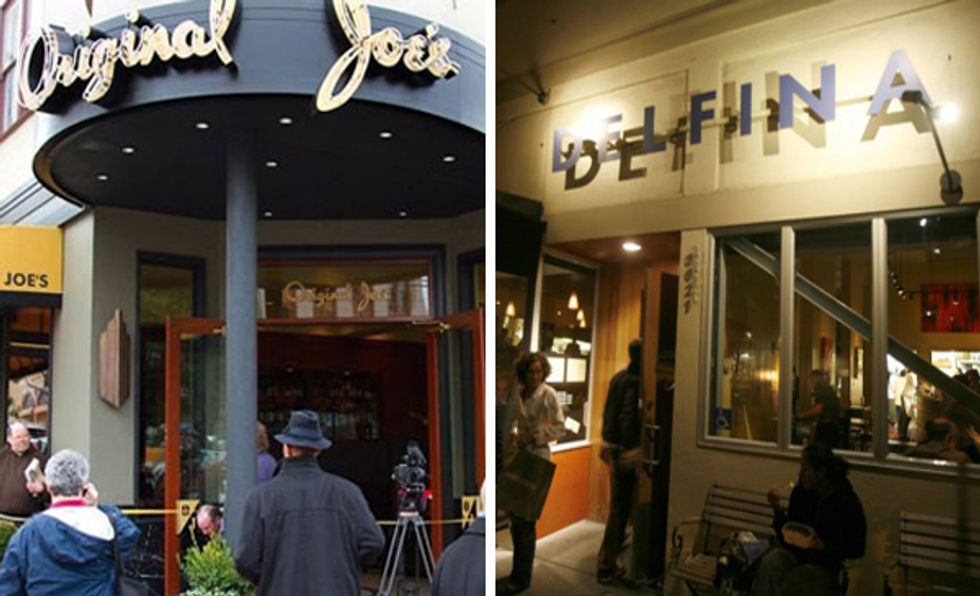 The recent closings of longtime San Francisco institutions like Sam Wo's (which may still reopen) and the Gold Dust Lounge (which is reopening February 1 in a new space at Fisherman's Wharf), and the recent threat of eviction for the 92-year-old Tosca Cafe in North Beach, has got us thinking about some of the other local classic spots we've maybe been taking for granted.

We decided to look at a few food and drink destinations that are unarguably classic S.F. institutions in the eyes of that Old San Francisco, and compare them to their New San Francisco equivalents. We're talking about the places that have opened in the last 15 years or so which, to those of us who have been here less than two decades, are already classics in themselves.

When the new Original Joe's opened in North Beach last year, former mayor Willie Brown was quick to observe that the people who flocked through the doors in its opening weeks represented Old San Francisco, the city of 40 or 50 years ago, before the Mission was a national foodie destination and before Italian food meant anything besides red sauce and stuffed shells. Original Joe's opened over 75 years ago and was a longtime Italian mainstay for San Franciscans. The Taylor Street space suffered a fire in 2007, causing the family that owned it to close and consider their options. In 2012, they snagged the prime corner space formerly occupied by Joe DiMaggio's and Fior d'Italia in North Beach, and reopened with a slightly updated menu, still heavy on the red sauce. Old San Francisco rejoiced (they're still turning out in droves) and the place has been well received by critics too.

Over in the Mission, there's Delfina. Opened prior to the dot-com boom in 1998, it became one of the anchors of what is now one of the most bustling gourmet ghettos in the country, 18th Street. Executive Chef Craig Stoll continues to put out consistently fresh, excellent pasta, and satisfying, often inventive takes on regional Italian dishes. To the minds of most of us in New San Francisco, Delfina has reached classic status. It's still consistently hard to get a prime-time reservation there without booking a few weeks in advance, proving its perennial appeal. Ask the Old San Francisco crew about it, though, and you might be met with a blank stare.

Photos courtesy of Mitchell's and KQED

In a survey of local ice cream, the Chronicle declared Mitchell's still tops when it came to flavor and sheer creaminess, but unless you're a true ice cream aficionado, you may not even have heard of the place–tucked away as it is on San Jose Avenue in sleepy La Lengua. Mitchell's uses the highest butterfat base of all the local ice creameries, clocking in at 16 percent, which may lend it an advantage -- all the new school shops use Straus Creamery's organic ice cream base, which is a mere 14 percent fat.

While Mitchell's has some new-fangled flavors like horchata, most of us in New San Francisco would think first of places like Humphry Slocombeand Bi-Rite Creamery to satisfy our ice cream needs with more unusual flavors like Secret Breakfast (bourbon and cornflakes), Jesus Juice (cola and red wine), or salted caramel. This is really a divide between the tastes of younger people, who are always going to chase after the new and different, and the older generation, who are going to stick to what they already know and love. For the record, both places make great ice cream, but we're more inclined to go to the place in the Mission, because Mitchell's feels really far away.

Back in North Beach, there's another institution that trucks along like it's still 1955 and Bing Crosby's about to swing in on his way to Finocchio's: Tommaso's. Their pasta menu is definitely of the Original Joe's school, with meaty sauces, plenty of marinara, and a classic, cheesy lasagna. But they're best known for the pizza, made in a wood oven in the same way for decades. The crust is delicious, crispy on the outside, but thicker and doughier than modern tastes tend to want. And the toppings are generous in true Italian-American style; none of this modest scattering of sausage bits, we're talking wall-to-wall crispy slices.

It's only been in the last five years or so that anyone around the Bay was talking about what a true Neapolitan crust was, let alone did we have multiple examples. The last three years alone have brought a gang of new pizzerias, but the best of the bunch remains Una Pizza Napoletana. Sure, you can't get anything besides wine to go with your pizza, and the only meat option shows up once a week, on Saturdays -- pizzaiolo Anthony Mangieri is a purist, you see. But nothing beats his flavorful, perfectly blistered and crisp-chewy crust, and his unadulterated, sweet tomato sauce. It's the standard by which we now judge all other thin-crust or Neapolitan pies.

Photos courtesy of Broccoli and Chocolate and Grassroots Gourmet

The Top of the Mark vs. Americano

There was a time when every tourist in San Francisco clamored up Nob Hill for a cocktail at the Top of the Mark. The place remains a stunning venue with unbeatable views and a sense of real SF history. (Did you know they keep a bottle of whiskey that can be enjoyed, for free, by any serviceman or woman who passes through the bar, a tradition that began in World War II?) But, it's also a hotel bar in the oldest sense of that term, and the martini menu leaves a lot to be desired in today's current cocktail climate; Sour Apple Pucker deserves no place on a respectable drink menu.

Nowadays, the hotel bar that hundreds clamor to, especially on warm-ish Friday nights, is Americano at the Hotel Vitale. It's a place to see and be seen if you're a young Financial District exec or design firm associate, and it definitely ranks high among the single scenes anywhere in town. But again, mostly when the weather is good.

There was a time when a coffee shop was not just about coffee. They served breakfast. They had a burger. They might have a sassy, world-weary waitress. That time has passed, but in San Francisco we thankfully have a few of the old-school spots left, like the Pinecrest Diner in Union Square, and the glorious Lucky Penny (next door to Trader Joe's at Geary and Masonic). You're not going to get a latte here, but you are going to get some great hangover food and some watery drip coffee. Also, just to reinforce how old-school this place is, there are posted signs outlawing all kinds of stuff, including cell phone use.

In the Mission, there's a far more new-school coffee destination where your grandmother would seriously slap you before she'd pay four bucks for a coffee. That would be Four Barrel, and about the only thing they have in common with the Lucky Penny is an aversion to technology -- no wi-fi. That keeps the all-day workers out and the true, light-roast fiends feeling a little more special. Don't get us wrong, they serve excellent coffee. But as famous as this place might be to many of you (ditto: Ritual, and Blue Bottle), coffee snobbery is a really recent phenomenon. There was a time, children, when Starbucks didn't even exist. It was a difficult, trying time, where all coffee tasted pretty much the same and there was no steamed milk, and people liked it anyway.