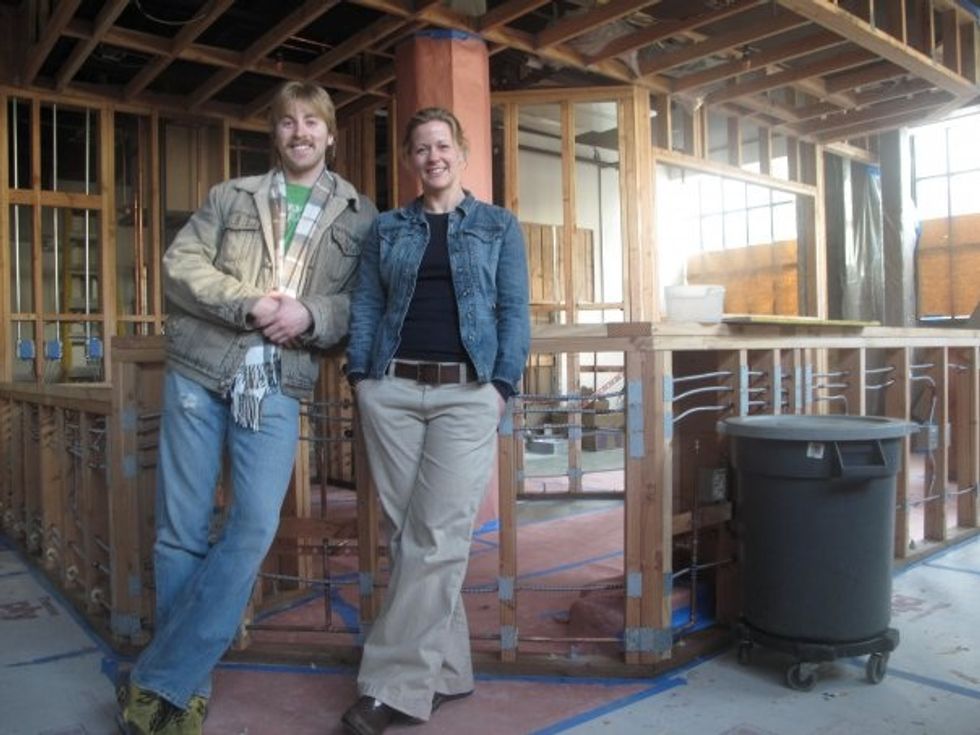 Who doesn't love a good grilled cheese sandwich? Longtime couple Nate Pollak and decorated grilled cheese champion (and girlfriend) Heidi Gibson both left the buttoned-up corporate world, took a crazy leap of faith in each other after the crash of the economy in 2008, and started the American Grilled Cheese Kitchen in South Beach, and the lunchtime lines haven't subsided since. We chatted with General Manager Pollak about how they make it work.

How did you two meet?
Heidi and I worked in the same office building in the Financial District. She was a VP at an internet company and worked one floor below me and I was a manager at a software consulting firm. It was quite a stuffy building, a lot of people wore suits and stuff, except Heidi and I. We’d always be walking in with our bikes, and we’d go into the elevator all sweaty and jam ourselves in with our bikes, and that kind of became our joke. We’d ride home together sometimes and it turned out we learned we lived pretty close to one another. She’d seen my band, Sex With No Hands, play before and we had tons of mutual friends in common, and we hit it off over that.

How did you transition from the corporate world to grilled cheese?
In September 2008, Heidi was laid off and she was trying to figure out what to do next. She wanted to start her own business, but didn’t want to go into software again. I was laid off in December, so we were both corporate refugees after the crash at the end of 2008. We went traveling together for awhile, and we both decided we wanted to start our own businesses. We started throwing ideas at each other and she was working on a plan for a specialty retail store, and I was working on a business plan for an iPhone application.

Heidi has been competing in these Grilled Cheese Invitational competitions for about 5 years, and she’s won a trophy almost every single year. It’s usually held in Los Angeles but one year they decided to have a regional one in SF in Dolores Park, and she asked me to help her, and I said sure, that sounds fun. She’s just a spectacular cook. We did all the prep, made this incredible sandwich that won first place. A month later was the nationals in LA, and we competed and won two trophies. People came up to us and said “You guys should think about opening up a grilled cheese sandwich restaurant” and then I remembered, I got myself through college working in a restaurant and being a bartender as well. I was like “Let's run some numbers and see if we could actually make a living off it", so we did a business plan. We did research by going out to eat 3 times a day for 6 months, sat through restaurants’ lunch rushes for three hours profiling what customers wore, what they liked. It was a 24/7 research project, we were never just assembling a sandwich.

How did grilled cheese bring you together?
I was a big sandwich guy. A lot of the sandwich research was done by me, because I know all the sandwich shops in the city. The first time I asked Heidi out, it was right after the Sentinel opened, I said “Hey do you want to grab some lunch at this great sandwich shop?” and she--despite being a grilled cheese champion--answered “I actually don’t eat sandwiches”. It’s so funny, because now she eats grilled cheese sandwiches three meals a day. As far as my love for sandwiches, it was always there. As far as her love for sandwiches, not as much, but her passion for cheese and grilled cheese was always there, and she had such a depth of knowledge of cheese, which is really impressive.

Are there any special grilled cheese sandwiches you make for each other, only at home?
Well because we eat so much grilled cheese at the restaurant, we try not to bring it home too much. We have a clear division of our relationship at work and our relationship at home. We’re very professional at work and that’s for us, and our business and employees. So at home, we’re like any other couple. We try to do nice things for each other at the restaurant, there will be the occasional inappropriate groping or kiss or whatever, but we keep that in the back refrigeration area.


There is one grilled cheese she made for me that used to be on the menu, and it was something I loved and ate every day. It was called the Windy City, and it was named that because I’m originally from Chicago. There’s a sandwich in Chicago called an Italian beef sandwich, and it features thin sliced boiled beef and a giardiniera, which is a hot pepper relish. So our sandwich had roast beef, provolone and a giardiniera on it, and it was totally for me initially. It was very sweet of her.

What’s the best and worst thing about working with your spouse?
The worst thing is that you never get a day off together, the best thing is that I don’t trust anyone else more in the world than her. I trust her more than my family. She is my family, and she’d probably say the same. We can only trust each other to do every single thing in the restaurant. Imagine signing checks for hundreds of thousands of dollars with your partner. But if you think about it in the grand scheme of things, it’s not a big deal. We’re just two people who found each other, who happen to work and get along well together.

Does not being married affect the business?
We’ve been talking about getting married forever, and it’s just a matter of us going and doing it. When we signed the business agreement together, we were both like “This is kind of getting married”. We had just decided to live together, share our finances and now we’re together 24/7. It is a kind of marriage. When we thought about actually getting an official marriage, Heidi’s sister got engaged, my brother got engaged, and there were all these other marriages going on around us and we were like “Eh…we’ll keep doing our thing”. We’ve taken a bigger dive than people who are getting married take. I challenge anyone to do this with their partner, and then tell me what’s easier, getting married or opening a business.

Any advice for couples wanting to start a business together?
Yeah. Brutal, blunt honesty, all the time. No passive aggression, just get it out. Don’t hold anything back. Occasionally Heidi will say, sometimes you just gotta jump off the bridge. The only way to do anything interesting is to go for it, and that’s what we’ve been doing. If people ask us if we would do it again, we’ll shake our heads, but we’ll shake our heads and laugh. Working with someone you trust and respect is a big plus for me.