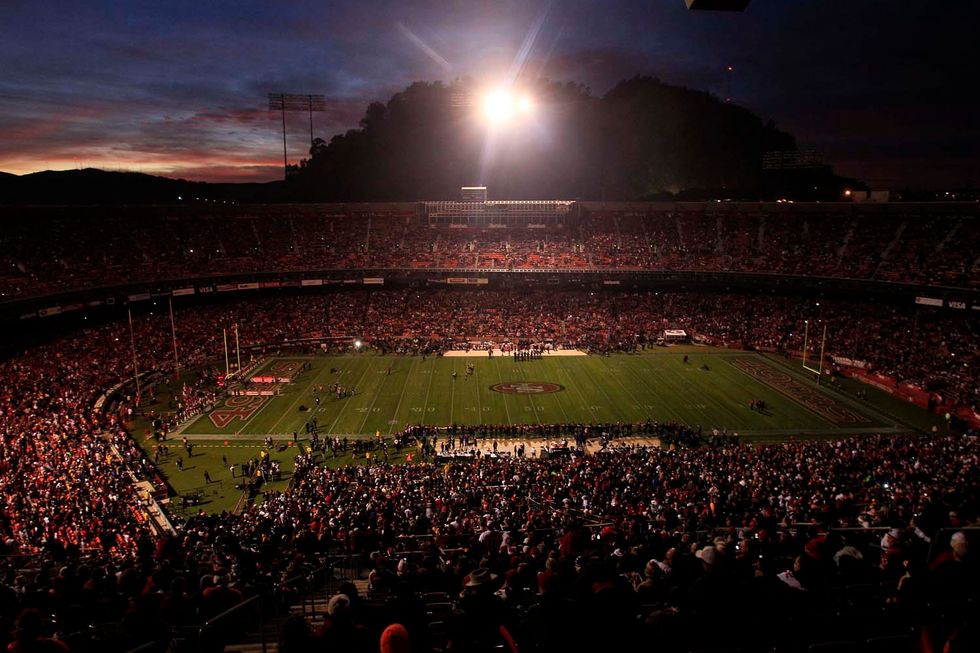 Love it, hate it, traverse the labyrinth that it is, and you’ll learn to (kind of) love it.

For Bay Area types, it’s an awful, terrible, let-us-never-mention-its-name type of a dungeon, but there’s still a strange, gripping, nostalgic place that tugs at the heart.

It’s the ‘Stick. We hate it, but it’s beautiful.

Candlestick Park, AKA, that place that’s impossible to get to and otherwise a miserable experience, is shutting down. And let us never speak of it again.

Tonight, the San Francisco 49ers play for the final time at the ‘Stick in front of a prime-time audience against the Atlanta Falcons. Only good things can happen of this.

The ‘Stick only has a vague historical connection. The Beatles (in case you’ve heard of them), played their final concert in 1966 at Candlestick Park. Paul McCartney is still hoping that a dance party could prevail at the joint.

But no matter how many times you’ve dodged traffic while cursing the person in front of you, there’s a small place in your heart for Candlestick. Young to Owens. Montana to Clark. Smith to Davis.

All of these ring nothing but nostalgia for those who have screamed things about no one having it better than those who support the 49ers. And now, it’s closing.

The 49ers are moving to their more commuter-friendly Levi’s Stadium in Santa Clara, leaving the ‘Stick rightfully behind.

Andre Iguodala, once hailed as a savior to the upstart Warriors, will make his less-than-triumphant return to Denver.

Tonight, the middling Warriors play the Nuggets. Iguodala left Denver after the Warriors eliminated the Nuggets from the playoffs last season and has been semi-loved in the Bay Area ever since.

The Warriors, once sweethearts in the area, are now sitting in ninth place and vying for the final playoff spot in the Western Conference.

It really was a good run for the Raiders.

Oakland, winners of only four, made massive strides to ideally compete in the AFC West. Instead, the Raiders fell repeatedly the icing was put on a miserable campaign when the division rival Chargers dumped the Raiders 26-13 on Sunday.

“It shouldn’t have been close, but they don’t give you any extra points for winning by a bigger margin,” Chargers quarterback Philip Riverstold ESPN in the aftermath.