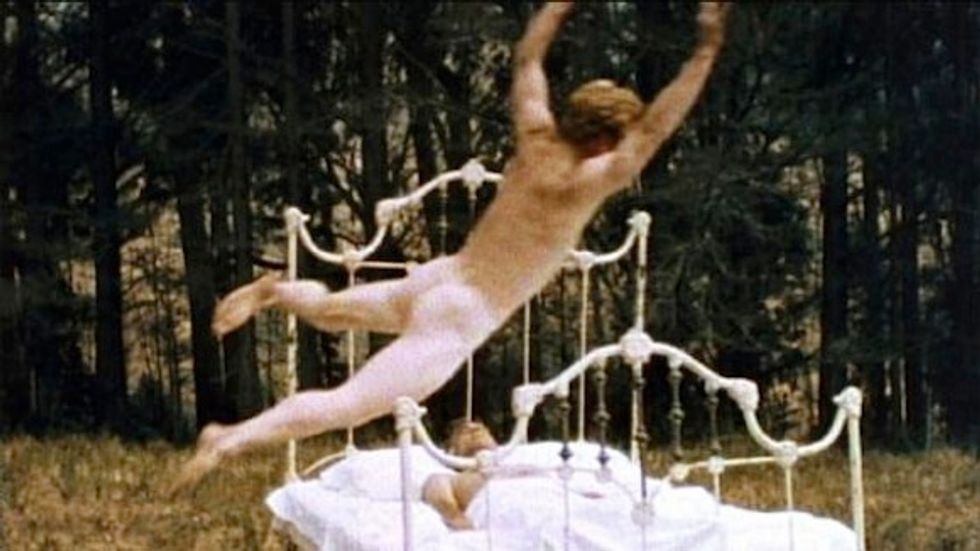 Beds, Boys and Bewilderment: What to See at Frameline37

One can't help but feel a bit sorry for the adorable otters that emblazon Frameline37's promo materials: They've been upstaged. The beloved fest, which opened last night, can only have one mascot--James Brougton, a figure so large and jubilant that he manages to eclipse all of the festival's many, many characters. A member of the San Francisco Renaissance which laid the groundwork for the vast popularity of The Beats, Broughton was an inspired, restless author of poetry, film and most of all, joy, spreading his own message of silliness and acceptance to students, artists and the public at large until his death in 1999. The festival showcase, Big Joy: The Adventures of James Broughton, which also travelled to Tribeca and SXSW this year, is a perfect testimony to Broughton's irrepressible enthusiasm, and surveys his life's work. Without glossing over the bad bits, it uncovers gem after gem, like his now overlooked 1968 short, "The Bed," which broke down resistance to nudity on film and introduced the America culturati to free-spirited West Coast sexuality. With an audience of friends rumored to include Armistead Maupin and dance icon Anna Halprin, both of whom appear in the film, Eric Slade and Steven Silha's doc will be amongst of the fest's most enlivening screenings.

Not content to tell half the story, the festival also makes room for another astounding poet and artist who trod the grass on which The Beats lay their blankets: Famously frank Bohemian expat (and Sheltering Sky author) Paul Bowles. Paul Bowles: The Cage Door is Always Open, Daniel Young's niftily constructed doc (also the owner of one amazing poster) weaves music, interviews and animation into a whole cloth in a fashion reminiscent of Rob Epstein and Jeffrey Friedman'sThe Celluloid Closet. That local pair also reappear this year with a new film, The Battle of Amfar, a history of the hard-fighting organization that dedicates plenty of screen time to founder and icon Elizabeth Taylor.

C.O.G., another of Frameline's showcase presentations, illuminates a writerly world as the first screen adaptation of David Sedaris' written work. Leveraging a capable cast of some of the best character actors working (Dean Stockwell, Denis O'Hare, Corey Stoll) and Glee's Jonathan Groff, director Kyle Patrick Alvarez captures the Sedaris' rough edges, paranoia, and acerbically humorous style, but also adds a touch of unexpected sadness to this tale of a young man in search of himself in rural America.

In other stories of searching, Bay-Area born Taiwanese director Arvin Chen, the protege of vaunted Thai New Wave director Edward Yang whose adorable Au Revoir Taipei stormed CAAMFest a few years back, returns to again nail the pop target with Will You Still Love Me Tomorrow. His new confection perfectly balances sweetness and melancholy. It stars the massively famous Taiwanese pop star Richie Jen as an aging optometrist who, after many years of playing it straight, falls for a handsome flight attendant from Hong Kong and falteringly re-emerges from the closet with some encouragement from his friends (notably Lawrence Ko, charming as a queeny photographer who could have been overbearing in lesser hands). Though it follows the romantic comedy template to a T, Will You is intelligent, well constructed and tone-perfect–an antidote to the shrillness all too often seen in mainstream handling of gay comedy.

Elsewhere in Asia, contemporary attitudes toward homosexuality are the line of inquiry in Fan Popo's light, sunnily positive Mama Rainbow. As the title indicates, the film focusses on the relationships of supportive mothers to their gay and lesbian children. In light of contemporary Chinese attitudes toward sexuality, some of which are on display in on-the-street segments early in the film, the matter-of-factness with which these matrons accept their children's sexuality is both surprising and heartening.

The stars of Tim Lienhard's film, One Zero One: Cybersissy and Baybjane (Amsterdam-based artist Antoine Timmermans and multi-disabled performance artist Mourad Zerhouni), another of the fest's documentary offerings, are so indigestibly fascinating that one might fail to notice how much heavy lifting the director is performing behind the scenes. Seamlessly fusing fairy tale, narrative and performance footage, his film itself is gender-queer. Timmermans, who bears most in common with local-to-national alt-drag performers Boychild and Dia Dear in his mode of melding nightlife, performance art and exquisite, eyebrow-singeing costumes, comes across as nearly the perfect subject–a beautiful freak with an engaging, aware intellectual wit that can smash taboos in the span of a single sentence.

Omnipresent media goblin James Franco, who lately appears to be channeling breakout porn star James Deen, appears not once but twice in this year's fest, first as producer of director Christina Voros' Sundance sensation Kink, a doc about the local studio of the same name, and second as co-director of Interior. Leather Bar. The stated goal of this whatsit collaboration between Franco and fellow director Travis Matthews (tellingly credited first) is to reconstruct 40 minutes of footage cut from William Friedkin's contended Cruisin by censors, which was subsequently lost. What we get instead is a film school diatribe about gender norms in which the star remains largely oblique. Although a bit hard sold, the main actor's verisimilitude to Al Pacino, especially Pacino's ambivalent feelings about appearing in a "gay" film, does infuse the experiment with some interest. Unlike Kink, Sundance may have been too big a platform for Interior., but taken as a student film, it's a curiosity worth inspecting.

Frameline37 starts today and runs thought June 30th at venues around the Bay. Check their website for listings, ticket sales, and late additions.