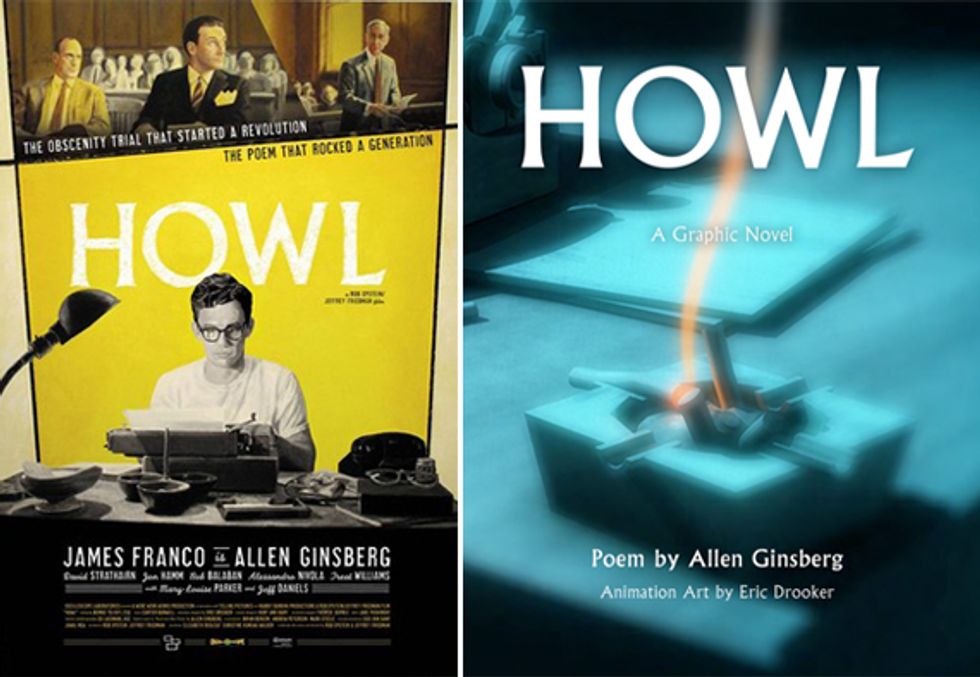 Behind the Scenes of Howl with Eric Drooker

If you haven’t already heard about Howl, listen up. Directors Rob Epstein and Jeffrey Friedman have just finished a movie version of Allen Ginsberg’s famously epic poem. The movie, part live action drama—starring James Franco, Jon Hamm and Mary-Louise Parker—and part animation hits theaters September 24 and is going to be big. Simultaneously, Harper Collins is publishing a graphic novel of renowned artist Eric Drooker’s animation from the film. We had the honor of sitting down with the painter, New Yorker cover illustrator and Berkeley resident to learn more about this gargantuan project.

You started off doing political poster art and published your first graphic novel called Flood before going on to animate Allen Ginsberg’s Illuminated Poems. How’d you make the jump to Beat Generation illustration?
It was actually a seamless transition because Ginsberg’s poetry was political, topical and local and encompassed all the same things I was interested in. We were both living on the Lower East Side in NYC at the time, so we were coming from the same landscape. Working with Ginsberg’s poetry was really just a natural continuation of my work. He’s actually the one who originally approached me. He had seen my posters on the street and thought we should collaborate. And then I suggested the idea of doing a book that illustrated his words.

You’re also a cover artist for The New Yorker. What’s your favorite illustration?
I did a factory-scape, which was inspired by the second part of Howl about industrialization, the cancer of the military and the endless war machine. This was exciting because most often my work for The New Yorker had to be censored. Its upper middle class readers want a pretty picture and aren’t interested in looking at really heavy material on the cover of the magazine, which is what most intrigued me. But this time I got to do something really different for the cover.

Who approached you about doing the book and movie version of Howl? Was this project a no-brainer for you?
Jeffrey Friedman approached me about the movie after seeing a copy of Illuminated Poems. They had this idea of animating the poem on film. And then the book was sort of a by-product of the animation from the film. I really liked the idea. It’s been about 13 years since Ginsberg died and I miss him terribly. You see, we had become great friends, and I saw this opportunity as the perfect way to reconnect with Ginsberg posthumously. I hesitated for a moment, thinking, “Is this insane? Am I biting off more than I can chew?” It was a daunting task but I was confident that my imagery would work. There was always a natural harmony between Ginsberg and me. It was my first time working with an animation studio and Hollywood lawyers. I’m generally a lone wolf in my studio, not a collaborator. This project was like being in a band. There was a steep learning curve and it was frustrating at times, but I think we all benefited in the end. James Franco came to me to pick my brain about Ginsberg, since he never knew him and had to get his head around how to play such a complex character. And it was empowering for me to be able to work on a project where I was encouraged to be completely uncensored, to be as visually arresting and radical as the poem itself. It was really an invaluable experience.

Now that you’ve finished the film, what’s next?
I’m currently working on a shorter animation project of one of my graphic novels called Blood Song. I’ve also gone back to painting again, which is a real relief. It’s nice to be doing something solo again, one thing at a time, no more storyboards. I’ll also be doing a slide lecture with pieces from the film at City Lights this September.
See Eric’s slide show of Howl: A Graphic Novel on 9/30 at 7 p.m.; City Lights Books, 261 Columbus Ave., 415-362-8193, citylights.com