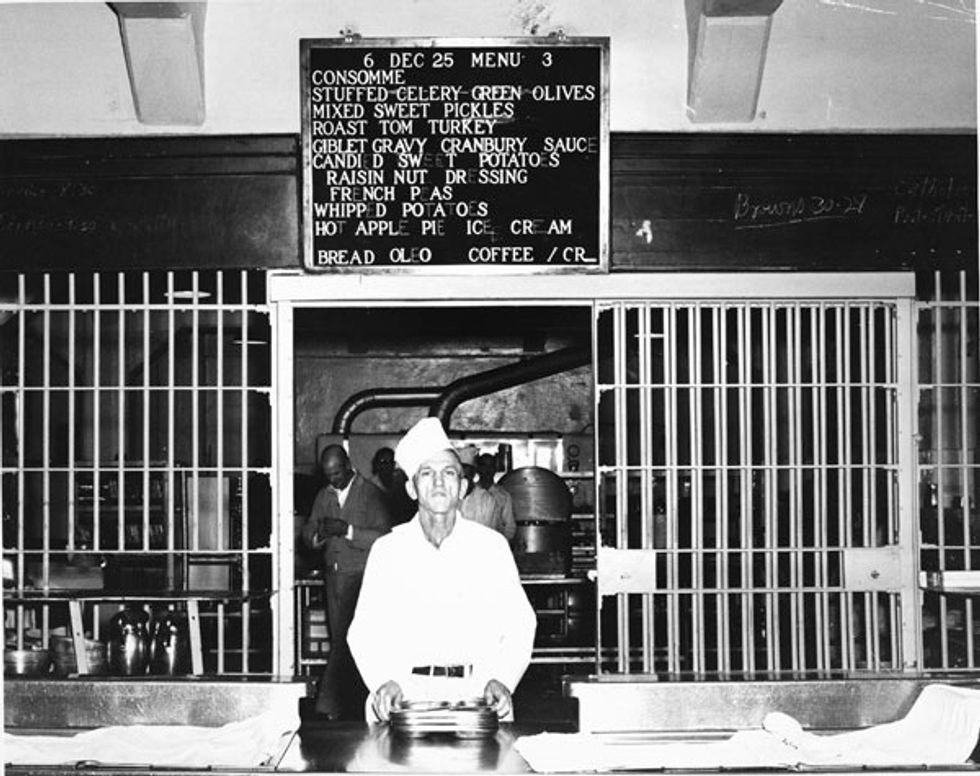 It’s lunchtime at Alcatraz Federal Penitentiary in 1946. Two hundred and fifty of the most dangerous criminals in America wait in single-file line for their meal. On the menu: split pea soup, roast pork shoulder with sage dressing, mashed potatoes and gravy, stewed corn, apple pie, bread and coffee. “It was rich. It was heavy. It was greasy. It was good,” says former inmate William Baker, now eighty years old.

Visitors to the Hyatt Embarcadero’s Eclipse Restaurant from now thru October 25th can try Chef Victor Litkewycz’s modernized versions of Alcatraz dishes. Entrees include thick short ribs, spaghetti bolognese, and fine-textured meat loaf made from pork, beef, and veal. The restaurant serves the prix fixe ($28) menu on compartmentalized metal trays similar to the ones used by inmates, and is producing the special in conjunction with the “Alcatraz: Life on the Rock” exhibit in the hotel’s lobby.

Though Alcatraz was famous for harboring gangsters like Al Capone and George "Machine-Gun" Kelly, it was also a culinary marvel. A staff of convict cooks prepared everything with little creative supervision. As long as they complied with nutritional guidelines set by the Bureau of Prisons (BOP), the cooks could tailor dishes to their culinary strengths and preferences. “I never ate spaghetti before I went there,” says Baker, who arrived in 1957. It quickly became his favorite dinner. “It was good old American spaghetti with lots of meat sauce.”

Alcatraz’s unique food policy based around tasty, generous portions was first implemented by warden James A. Johnston who believed good food bred good behavior. In practice, that meant loads of beef, often served twice a day as meat loaf, corned beef, croquettes, and pot pie. Other typical entrees included fried chicken and fried pork chops, each served with soup, one to two vegetables (fresh or canned), freshly baked bread, coffee or tea, and nightly desserts. Due to isolation and limited availability of processed foods at the time, everything was made from scratch–including breads and cakes.  Unlike other federal prisons, Alcatraz did not have an inmate commissary that sold snacks.

Beyond promoting docility, the Alcatraz staff had an another incentive for advocating quality fare. They ate it too. According to Alexandra Picavet, Public Affairs Specialist for Golden Gate National Recreation Area, inmate cooks fed 60 to 100 guards per days. That doesn’t occur in present-day California prisons like San Quentin where guards never eat the inmates’ food.
Ample servings did not, however, curb convicts’ thirst for alcohol. The kitchen staff had the best access to potato peels and other scraps that could be fermented. Bakers sold yeast in matchboxes for $5 each, and inmates could easily swipe cans of plums to make sweet home brew.

Placement in the kitchen had other perks too. Cooks were the only ones able to take daily showers, and their work was pleasant compared to scrubbing toilets. They also commanded respect amongst prisoners and guards. “These are the only prisoners who are getting sharp instruments regularly to work with,” says Picavet. “You had to be trustworthy.”

“They took pride in their work and felt accountable to their fellow inmates, “ says Baker who faults today’s prison cooks for apathy. Baker has been in and out of federal prison since leaving Alcatraz in 1959 and was most recently released from Leavenworth in 2011. He’s noticed the food decline over the last fifty years. “It’s all processed stuff, and it's really terrible,” he says.

At San Quentin, inmates still cook the food, along with hired staff, but they don’t influence the menu. That’s determined by the California Department of Corrections and Rehabilitation (CDCR) in consort with nutritionists, operating on a budget of $3.15 per prisoner per day. While San Quentin does bake bread and make cakes, they now use pre-made doughs and dry mixes. Whereas Alcatraz served what Baker calls “real meat on the bone,” at San Quentin, beef is usually ground in the form of patties. Chicken and turkey are more common, and pork has been outlawed due to inmates’ religious restrictions. Vegetarians would have starved at Alcatraz but at San Quentin, they’ll find meat-free alternatives for all dishes.

About seven years ago, California State prisons switched from hot lunches to bagged ones prepared by the The Prison Industry Authority (PIA). Instead of the potato chowder, breaded rock cod, mashed potatoes, stewed tomatoes, homemade bread and tea served at Alcatraz, San Quentin prisoners receive a lunch meat sandwich, nuts or crackers, cookies, fresh fruit, and a drink powder to be mixed with water.

At Leavenworth, Baker couldn’t believe the low quality. “You’re sent to prison for the crime you committed and the punishment is that you lost your freedom.” He insists that food shouldn’t be used punitively. “There ain’t no love in prison,” he says. But at Alcatraz, at least there was good food.