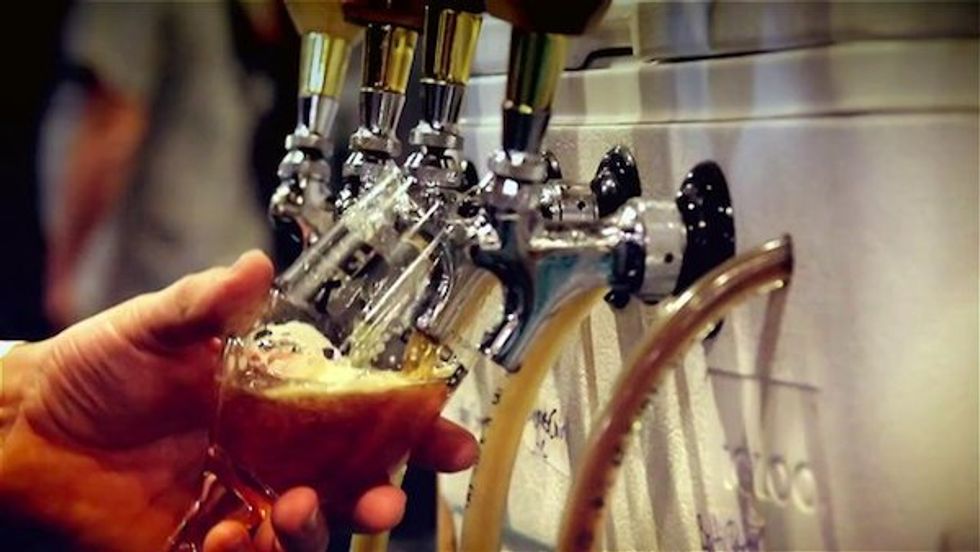 This year’s SF Beer Week is on track to be the biggest in the history of the event. While your favorite bars and restaurants may be posting their individual events on social media, SF Beer Week’s web site has a comprehensive list of the hundreds of events. This year’s site also includes a Facebook feature that enables you to post your itinerary to FB and see other people’s; which makes it easier to coordinate with your fellow beer lovers.

To help you navigate the week, we checked in with Brian Stechschulte, Executive Director for the San Francisco Brewers Guild and the organizing force behind SF Beer Week, to get the lowdown on this year’s doings:

There are 80 breweries represented at the opening event. About the same as last year. Is that the max number the venue can accommodate? Were there other breweries that wanted to attend but there wasn't room for?

If I remember correctly, 72 breweries were in attendance at last year’s Opening Gala. We were aiming for 80, which is the most we can fit into the space, but fell short. That’s not the case this year. I had to turn away some incredible breweries, which is disappointing for them, and me, so I don’t want to elaborate on who they are. Breweries making their first appearance include: The Rare Barrel, Petaluma Hills Brewing Company, Napa Point Brewing, Faction Brewing, Discretion Brewing, Hop Dogma Brewing Company, Santa Clara Valley Brewing, Cellarmaker Brewing Co., Headlands Brewing Co., Fort Point Beer Co., and San Francisco Brewing Company.

It looks like there are more events outside of the city proper than in years past. Is there more interest outside SF, or are you expanding the geographic scope of SF Beer Week?

We’ve never really defined the geographic scope of SF Beer Week, so the expansion you’ve noticed is really just a part of the natural growth that’s occurring in the industry, especially in the suburbs. More bars and restaurants are serving craft beer. Some are brand new, while others are waking up, so to speak. I’ve received several emails from bar owners or their employees telling me that they just converted their draft selections to craft beer, or added a whole bunch of new taps, and want everyone to know during SF Beer Week. That’s really exciting, because SF Beer Week is really about the entire Bay Area community and promoting all the good things that are happening here, so everyone who loves beer or works in the industry benefits.

Each year members of the SF Brewers Guild collaborate on a beer, can you talk about this year’s brew?

It was created in honor of Greg Miller, better known to SF homebrewers as “Griz,” who ran San Francisco Brewcraft in the Richmond District since the late 1990’s. He passed away last September. His personality, knowledge, and store has helped and influenced many homebrewers over the years, including quite a few of our professional brewers. So it was only natural for us to create a beer based on one of his recipes.

His Lawnmower Ale was the most common recipe he would write down for first time homebrewers. It doesn’t exactly fit into a beer style. It’s loosely considered to be either a straw colored lager or pale ale that’s fit for yard work. The SF Brewers Guild used Griz’s exact ingredients, but dialed up the hop volume. It’s called Griz’s Lawnmower Ale and it’s a cross between an American Blonde Ale and Session IPA, that’s 5% alcohol and 30 IBU’s. It will be poured for the first time at the Opening Gala and then be served at SF Brewers Guild breweries and a few select accounts around the city.

Since you are more familiar than anyone with the events, can you recommend five of your favorites?

1. Drake’s Sau & Brau IV: Quatros Porcos - You really can’t go wrong with a whole hog pig roast and a delicious lineup of Drake’s beer. I went the very first year and was hooked.

2. Beer Talks 2014 - Almanac Beer Co. has invited six experts to give short presentations about barrel aging, how to start a brewery, IPAs and more, to celebrate the thought process, creativity and design of craft beer. A beer will be paired with each topic. It should be great.

3. Sacred & Herbal Healing Beers - I always think it’s fun to explore unfamiliar beer territory. JimWoods at Cerveceriade MateVeza will be making 3 recipes with all sorts of exotic ingredients that were pretty common in ancient culture before everyone went crazy over hops.

4. Cask & Queso: Triple Fermented - When one event unites two things I love dearly, then it’s a no brainer to attend. ThirstyBear always lines up a great group of casks from around the Bay Area and beyond, and then pairs them with extraordinary cheeses. Besides the Opening Gala, this event is a tradition for me.

5. Meet Your Maker - The brewers, vintners, distillers, and artisan food producers in Petaluma recently came together and formed the Petaluma Craft Guild. This collaborative event should be delicious and enlightening.

By the way, it’s great to be able to post a personal itinerary on Facebook again. Congrats on reinstituting the feature.

Thanks. Community engagement and word of mouth marketing is really important to SF Beer Week. It helps support the growing culture and businesses that serve craft beer. If people couldn’t share their excitement with one another then it’s a lost opportunity to serve the whole community.

Anything else you want people to know about the week?

Not really, but I will offer some advice. Choose wisely, pick quality over quantity, and most importantly, be safe and respectful while you enjoy the week.