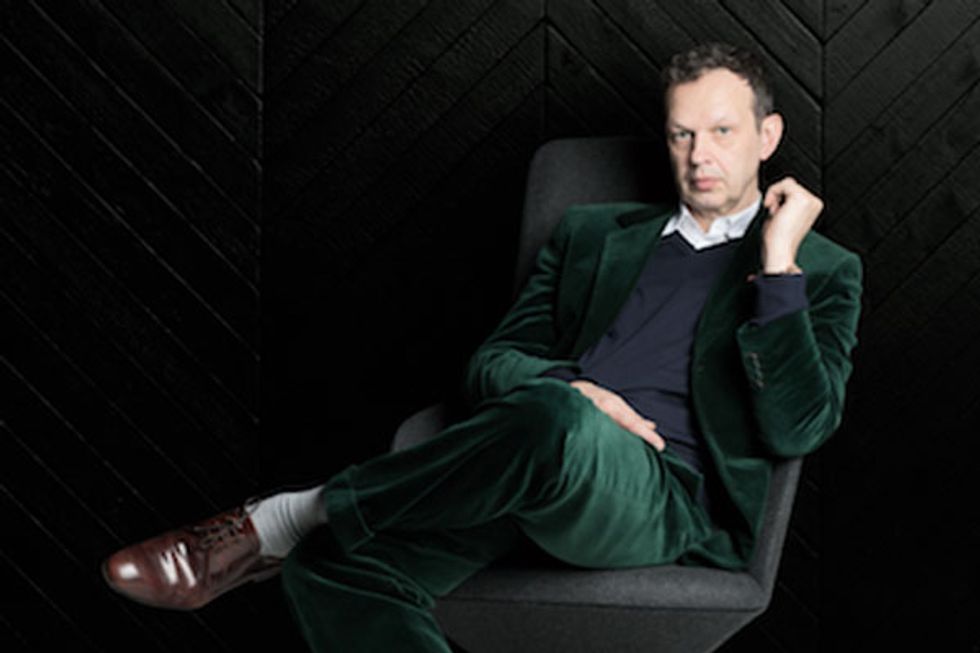 British designer Tom Dixon swept into town last week, landing at Arkitektura Assembly (a design series presented by modern furniture emporium Arkitektura) to promote his book, Tom Dixon: Dixonary. In it, the creator of super-popular light fixtures such as the Beat Light, the Mirror Ball, the Void Light, and the mega-hit Copper Shade, details his creative process. We chatted with Dixon about design, the lives of techies, and the future.

MJ: I see your work everywhere in the Bay Area.

TD: That implies that I’ve become a bit irrelevant, I’d better get busy.

MJ: How did you start designing furniture?

TD: I was playing the bass guitar in a disco band called Funkapolitan. I had a motorbike that I road around and I had an accident, broke my arm, and ruined the bike. With a broken arm, I couldn’t play the guitar, but a friend who had a garage taught me how to weld so I could fix the bike. Learning to weld opened up a whole new world for me, and I started making furniture. Welding felt almost like a super power.

MJ: How did you make the jump from designing welded salvage metal chairs to having your own company?

TD: I worked for Habitat [the British furniture and accessories store founded by Terrance Conran] for 10 years. I put a lot of energy into it, and after a while I decided I wanted to open my own label.

MJ: Your work, especially your lighting, has been hugely popular. Why is it such a hit?

TD: I do make things other than lighting—but that was first, so it’s the most popular. My work is different, and people responded to it. I also think that my work warms up modern interiors, and that helped. In America, I think they were looking for a different point of view, a different look than the Shabby Chic aesthetic.

MJ: When you were playing in a disco band, did you ever dream you would be awarded an OBE [Order of the British Empire, an award bestowed by the Queen]?

TD: Oh my god, no. Such a thing never occurred to me. No one really knows how those things are decided—it’s all very secret.

MJ: Have you ever been to San Francisco before this?

TD: Yes. I was at Google Labs recently—we were exploring collaborating on a design project. Today I was at Airbnb. They discovered my place on their site and wanted to talk to me about it.

MJ: You rent your place on Airbnb? How did they know it was yours?

TD: They didn’t until they asked. Someone from there thought it was well designed, so they called me about it.

MJ: What did you think of SF’s tech companies?

TD: They are very interesting. They seem very rich and like they are having a lot of fun, but I wonder if it’s a good quality of life? The lobbies are fantastic!

MJ: What is next?