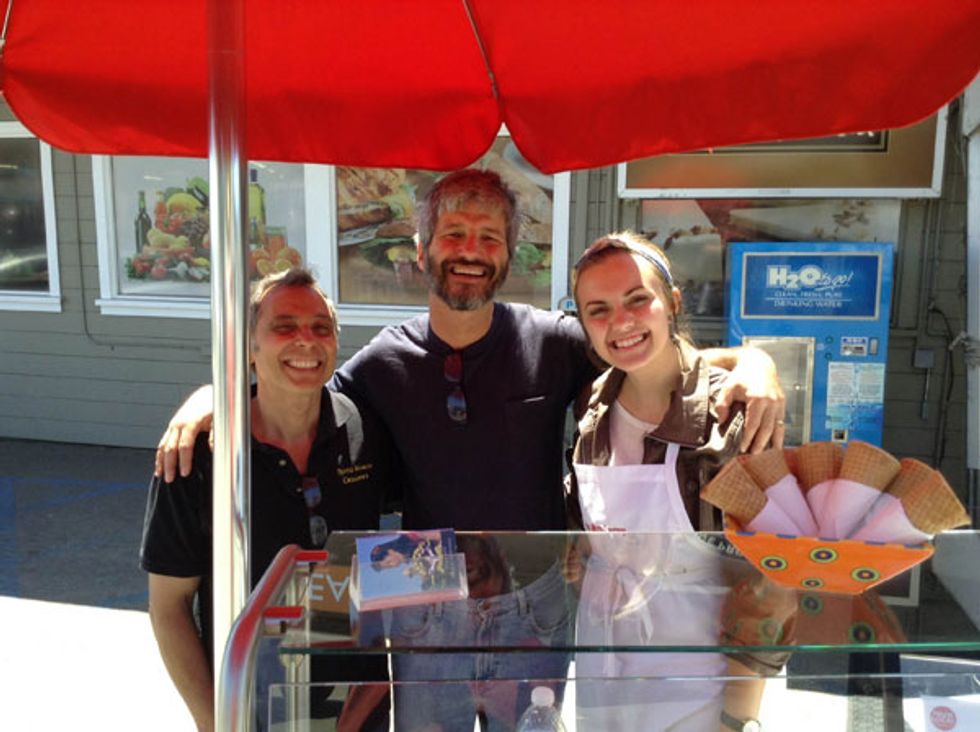 Marco Moramarco is redefining the “start up” concept in a delicious way. After working as a software engineer in Silicon Valley for 20 years, Moramarco and his partner Paul Vierra moved up to Gualala, California on the Sonoma-Mendocino Coast. A neighbor with an excess of goat’s milk and a Williams-Sonoma gelato machine helped Moramarco discover his new calling— creating artisanal gelato from scratch. His leap into a new profession, and intense dedication to getting it right, caused his friends and family to affectionately deem him “pazzo,” crazy — soon, Pazzo Marco Creamery was born.

Using local ingredients (some as local as his own garden), Moramarco and Vierra have taken the North Coast by storm with their impeccably creamy, wonderfully flavorful gelato that puts much of Italy’s best to shame. Here, he talks about his perfectionist approach to gelato making, his love for the North Coast, and his newest endeavors into cheese and yogurt making.

Creamery in the woods.

After decades in the tech world, how did you know that you wanted food to be a part of your next endeavor?

Food had always been my passion! And my Italian heritage plays a huge part. My father and uncles were farmers, my mother and aunt were always cooking.

What was it about gelato in particular? Other than it being delicious, of course.

Ten years ago I went to Italy to take an intensive, immersive Italian course. I studied and lived with an Italian family, and found myself eating gelato a couple of times a day. As far as sweet things to eat, it’s my favorite. If it’s done right, it’s not overly sweet; it has a delicate soft bite to it. And when you think about it, it’s loaded with nutrition, too! Milk, calcium, protein.

Gelato as health food? Sign me up! After experimenting with goat’s milk and your small gelato maker, how did you step up your game?

I knew that I wanted to take a course to really understand the chemistry of gelato. So, I planned another trip out to Bologna, Italy. I was a little dismayed, at first, because the first few days was about buying a mix and putting it in a machine. That wasn’t interesting to me. I told the instructor that I wanted to make it from scratch, to really understand why you add a certain amount of milk, a certain amount of cream. Through that I developed my own recipe.

Gelato from a mix in Italy?

Yes — even in Italy it's challening to find great gelato. Now they’re made with mixes. In both the US and  Europe, there are very stringent requirements that you have to meet to make dairy products from scratch. Here, you have to be USDA-certified and you need equipment to pasteurize— which can cost up to $200,000. If you buy those pre-made mixes, you don’t have to do that; you just need a clean space.

But you knew that you didn’t want to cut corners.

It’s cheaper, but with the mixes, you can’t control the amount of sugar, or the overall flavor in the same way. And part of the major motivation for me was to make something that we could do with largely local ingredients. We use this incredible milk from Stornetta Ranch in Manchester, which we go pick up during the morning milking, and it’s still warm. The cows live on the coast. They’re grazing on the grasses growing here; it has a sense of terroir.

What other local ingredients do you use?

We use peaches and apricots from Suisun Valley, pears from Lake County near Mendocino. We use lemons, apples, and basil from our own garden, and strawberries from Sebastapol. We made a special 50th Anniversary flavor for Sea Ranch, whirling in chevre and huckleberries. Huckleberries grow on the coast here, and Sea Ranch used to be a sheep and goat ranch. People really, really liked it!

Gelato and chevre? Yum. Speaking of cheese, what led to your burgeoning cheese and yogurt production?

It goes along with having access to this local milk. Even before we started making gelato Paul and I took a cheese making class in Vermont. That idea went on the backburner, but once we got the gelato business and our creamery license, I knew that eventually, I’d want to get back into making cheese. I probably picked the most difficult cheese to start with, a washed-rind cheese similar to taleggio, that I’ve been working on it for about two years [they make a fresh ricotta, too].

Yogurt is a more straightforward process compared to cheese. It’s not as complex, but it’s something else we can do when we’re in the creamery making the cheese or the gelato. We’re doing a thicker, Greek-style yogurt.

Delicious, all around. What’s next for Pazzo Marco?

We really want to focus on doing what we do right now very well. I’m always asking myself, “What can make this better?” We’re just working with one type of cheese right now; I’d like to add another. We’re thinking about seriously expanding our cheese market into the Sonoma area — it’s much easier to transport than gelato. I’d like to get our production up. It’s just me and Paul; we don’t have employees. And that has been intentional—we want to be close to the product, not managing people. But expansion aside, we are very local, we want to stay that way.

What gelato spots do you recommend, beyond your own of course?

In the Bay Area, I’ve done some work with Double 8 Dairy, which is made from buffalo milk. It’s really, really good —  they’re doing gelato for restaurants including The French Laundry and SPQR in San Francisco [full list here].

While we’re talking favorites, let’s get into the lightning round portion of this interview:

Favorite restaurant for a casual meal in the Bay Area:

The milk that we get from Stornetta Ranch is incredible.

We like to walk on the beach in Schooner Gulch, or the Point Arena Lighthouse.

Favorite place for a weekend get-away?

Favorite ‘locals only’ spot in the Gualala area?

Trink’s Cafe is one, and Anchor Bay Thai Kitchen is another.

Favorite thing about the North Coast?

I love the diversity. It’s what makes it unique and beautiful and such a wonderful place to live.

Pazzo Marco Creamery products are available primarily in Gualala, Sea Ranch — find their gelato, cheese, and yogurt at the Surf Super Market in Gualala (sometimes, Moramarco will be out front with their charming gelato cart); you can also look out for their goods at the Black Point Grill in Sea Ranch, Trink's in Gualala, and Anchor Bay Thai Kitchen in Anchor Bay. Follow them on Facebook and sign up for their email list to get the scoop on weekly flavors and availability.