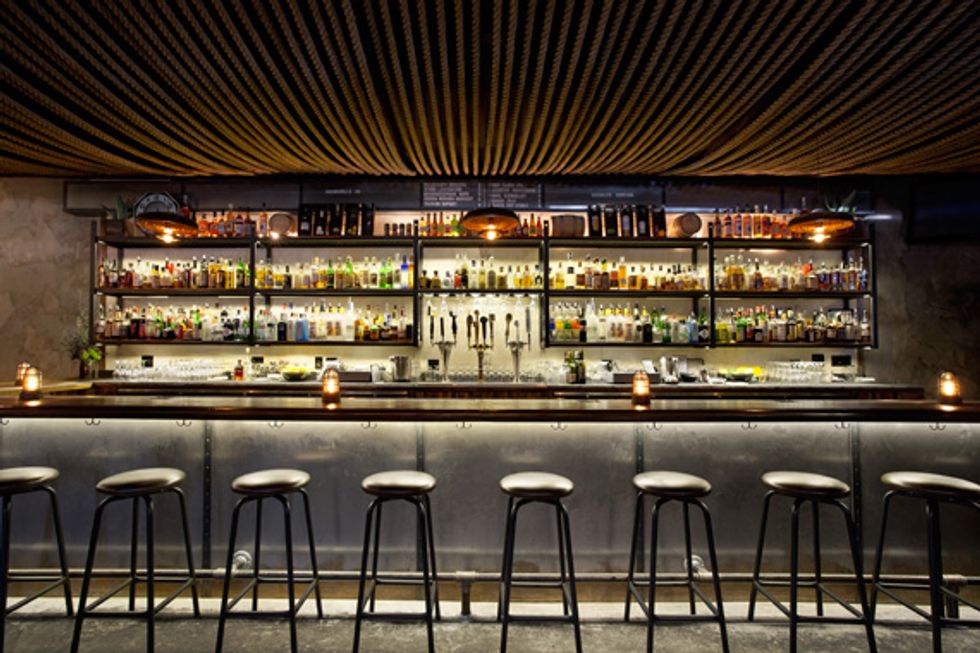 One glance at the intersection of Church & Market Streets and it's clear something's different. Gone is the strobe-lit hole that was Bar On Church and in its place stands Churchill, a new earth-toned bar that feels like a cushy military barracks.

We caught up with local designer extraordinaire Lauren Geremia — who also styled Double Dutch and Bloodhound — to see how she brought this new spot (that's already packed nightly) to life.

Tell us about the local designers or artists that you used to bring Churchill together.

I designed a lot of the stuff custom and then had some stuff made by friends of mine. I designed most of the light fixtures, like the glass ones up front and the long mirrored ones. I had DogFork Lamp Arts make the mirrored fixture and a college friend, Jess Wainer, blow the glass for the other fixtures I designed.

Some of the light fixtures are made out of old chicken feeders?

Yeah, the pendants over the bar are chicken feeders that we rusted, and then I got old naval lights for the bar top. And then there are bucket lights from Belgium that we got from a thrift store that are from the 30s, so we rewired those. There’s a really cool old copper planter that we combined with a bunch of old pipes to make the light over the pool table.

Is that a similar approach you took in the past with Bloodhound and Double Dutch?
Yeah, I usually try  to make 70-80 percent of the furniture myself in my projects, so there’s very little that we’re buying off the shelf.  Most of the space is full of natural materials. There’s no plastic or anything like that. It’s pretty much just glass, wood, a lot of metal and we kept the concrete floor. It’s sort of a military barracks theme, and it’s super manly.

Can you talk about the wood on the outside of the bar?
I used a guy that has really, really great wood. He’s local and just collects wood from places — there’s always a story behind it. I started the whole concept by eliminating everything first. The bar was disgusting, so in order to come up with a design concept, I just started stripping away. And what we found were that the materials that were already there were actually a lot cooler than what we’d be able to go out and find. Before we uncovered the ceiling, it was this gross, black crazy mirrored disco ball ceiling. And underneath, there were all these super old wood slats that we sandblasted and put back up.

The coolest elements in the space are the ropes. I covered half of the ceiling with giant, thick ship ropes that hang and sag, and actually help a lot with sound. It looks like you’re sitting underneath a ship.

Also, I wanted the walls look naturally really old, so I had my friend Willem Racké cover them in a treatment of paper. They put it up and then pulled it down over and over again, and now they look like an old billboard that’s been used a lot.

So your idea for the space was essentially influenced by what already was there?

I think I just wanted to exposed the integrity of the building. And just in general the history of the neighborhood — I wanted to bring something really classy to the street because it’s pretty intense on that corner. It’s not a super attractive building from the outside so I kinda wanted the outside to be really clean and a little bit like a fortress. The inside is supposed to be something that transports you far away from the street, the bus station and Safeway and all that.

Who came up with the WWII theme?
It was just a product of a lot of the things I was looking at. Mike Goebel [the owner] wanted wood. I wanted to use a lot of metal work and glass lights. Once I started putting the material palette together, it started resembling an army barracks. We hashed out a lot of ideas in the beginning, like using tents, because I knew I had to cover up the ceiling. And it was a very easy transition for the guys from there. Mike would kill me If I said this but I think it’s a fun concept for the Castro!

Modern Guide to Boise: The hip Northwest destination is giving Portland a run for its money