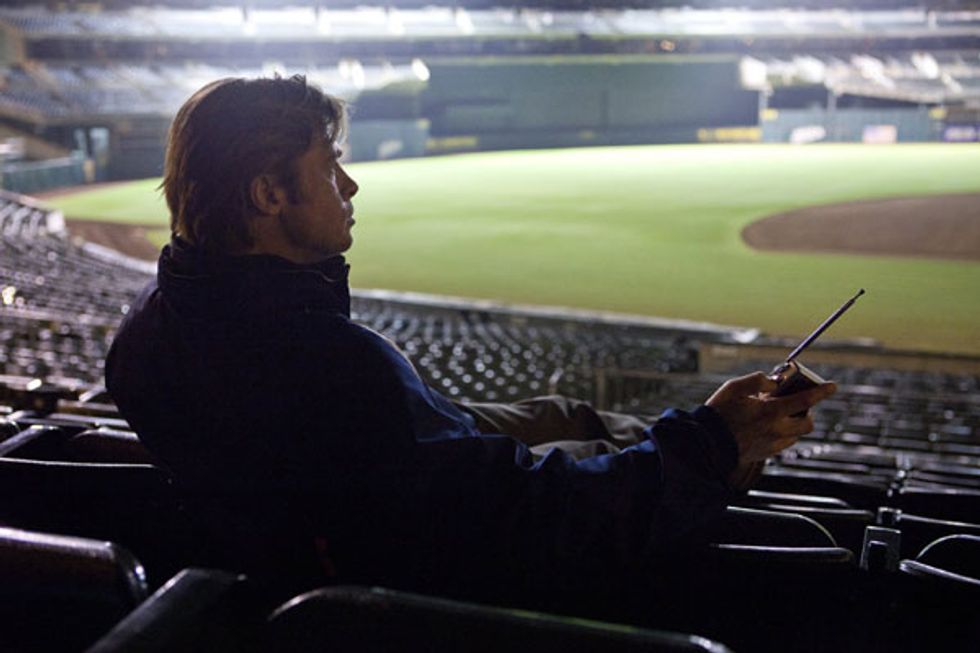 You might have spotted Skinny Pete from Breaking Bad walking around Lake Merritt this week. Actor Charles Baker is starring in a new indie film, August Falls, which is currently shooting in Oakland and Berkeley.

In the movie, directed by Sam Hancock (Being Us), Baker and Fairuza Balk (The Craft, American History X) are strangers who develop a relationship after she moves into her dead son’s apartment. So far, the shooting has been centered around the Lakehurst Apartments near Lake Merritt, with one scene shot at Lake Park. Berkeley’s Revival Bar + Kitchen is also host to an important plot point, and Baseball Hall of Famer Joe Morgan — who played for the Giants and the A’s — is lending his mansion in the hills for a key scene in the meeting of Balk’s and Baker’s characters.

Rather than scour the lake looking for an ex-meth head, the news got me thinking. What other movies have portrayed the East Bay shores on the silver screen? Here are a few I discovered, if you have more, let me know in the comments.

Dustin Hoffman famously admired Telegraph Avenue from the storefront window of this now-defunct cafe in The Graduate. 2475 Telegraph Ave, Berkeley

At the triumphant end of tear-jerker The Kite Runner, the newly formed family are seen flying a kite over the bay at Cesar Chavez Park in Berkeley. Plus, the graduation scene was shot on Treasure Island. 11 Spinnaker Way, Berkeley

While it's easy to remember the sweeping views of the Golden Gate Bridge and the 7x7 in the 1986 sequel to the popular franchise, The Voyage Home was also shot in Oakland and Alameda. Check out these shots from the USS Enterprise in Alameda and the Oakland Airport.

Yes, the one where Leonardo DiCaprio plays the smokin' hot Romeo to Claire Danes' Juliet. If only I had known that scenes were being filmed in Alameda back in 1996. Swoon.

This one is pretty obvious, but in case you missed it, Moneyball is about the Oakland A's, so it makes sense that the movie was actually filmed in Oakland. Start at the Coliseum for film highlights. The Coliseum, Oakland

The beloved teacher, played by Julia Roberts, spend her off months in (you guessed it) Berkeley, CA. On February 26, 2003, a small crew shot a rooftop scene on Orange Street near Perkins Street in Oakland which was digitally combined with another shot of the Bay Bridge from Yerba Buena Island to create an establishing image of Julia Roberts' character's home in Berkeley. Alas, the interior of the home was filmed in New England. Orange St., Oakland

Another obvious one, but it's impossible to leave out the film that rocked the Bay Area after the infamous 2009 New Year's Day shooting death of Oscar Grant. The real Fruitvale BART station, Oakland

Unfortunately, we're talking about the terrible 2003 version with Eric Bana. Still, the angry green monster was all over the Bay Area that year, filming scenes at the Lawrence Berkeley Laboratory and in West Oakland.

What Dreams May Come

The East Bay played a prominent role in this strange movie where a dead Robin Williams' searches the afterlife for his wife. Williams' character's funeral service was filmed at the 1st Baptist Church on Telegraph Avenue near West Grand Avenue, he was buried at Mountain View Cemetery, and the ending was filmed on the north end of Lake Merritt in downtown Oakland.

This classic SF film tipped its hat to sunnier East Bay weather with scenes at the swimming pool at the Claremont Resort and Spa (filmed on April, 26-27 1993). Other scenes were shot at the KTVU television station (near Jack London Square) during the week of May, 3 1993. 41 Tunnel Rd, Berkeley

Let's just say that Robin Williams doesn't like to work too far from home. The interior wedding scenes from this '90s favorite were shot in the chapel at Mountain View Cemetery on November, 11 1996. 5000 Piedmont Ave., Oakland

The Indian in the Cupboard

The story of a young boy who brings his toys to life with the help of a magic cupboard, The Indian in the Cupboard was filmed from May, 17-19 1995 at the Redwood Grove at Big Tree in Joaquin Miller Park in Oakland.