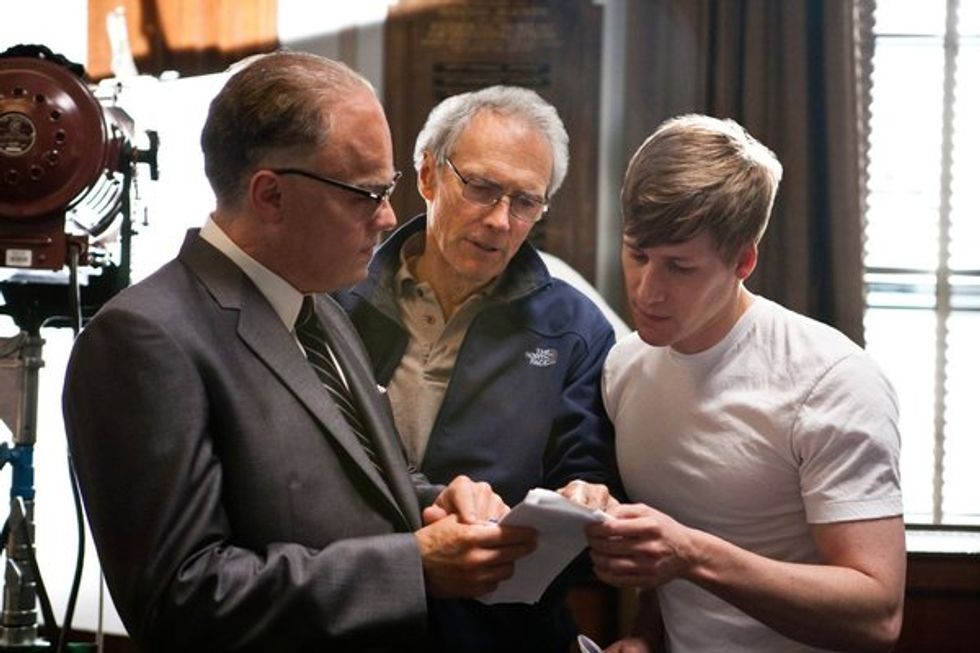 J. Edgar Hoover may have savored his tough-guy image as America’s top cop, a rule-bending maverick unrelenting in his pursuit of justice, but Clint Eastwood, whose fascinating biography of the FBI’s first and longest-tenured director opened Wednesday at the Century SF Centre, the AMC Van Ness and the Sundance Kabuki, says there’s no similarity between Hoover and “Dirty” Harry Callahan.

“Harry was a mythical character,” Eastwood says of the rogue San Francisco detective he created in 1971 with director Don Siegel. “He was a man concerned with the rights of victims at a time when everyone was obsessed with the rights of the accused. And his story was very violent.

“Hoover was an administrator. He wasn’t out making arrests. He had agents to do that. But he was aggressive, and he was scrutinized because people disliked him.”

Eastwood is right, of course – the FBI’s chief architect wasn’t the inspiration for Callahan, but if J. Edgar is any indication, the fictional lawman enjoyed the reputation Hoover desperately coveted: an iconic hero, idolized by kids and feared by the crooks – and Communist sympathizers – he hunted with single-minded tenacity.

Now 81, the San Francisco-born Eastwood grew up reading about Hoover’s exploits in the papers, and took him for a hero. As an adult, he remembers less flattering accounts of Hoover’s tactics, as well as accounts of his eccentricities, which were the stuff of tabloid legend, and later his sexuality. Eastwood found it difficult to separate rumor from fact, and still does.

When producer Brian Grazer approached him about directing J. Edgar, from a screenplay by Oscar winner Dustin Lance Black (Milk), Eastwood appreciated the chance to dig deeper into the legacy of one of the most powerful Americans of the 20th century, whose private life remains an enigma.

Proudly old-fashioned in his refusal to indulge in reckless insinuation, Eastwood makes no claims in the movie that he couldn’t support with available facts. Though Black believes Hoover was gay, the director says that “remains to be seen.” Black recalls, with admiration, Eastwood obsessively questioning the writer’s sources for every one of the film’s personal details. It drove the 37-year-old Sacramento native to dig deeper.

“This was a tough one to research,” says Black, who was initially drawn to the repressed, painstakingly clandestine Hoover as the polar opposite of his last big-screen subject, Harvey Milk. “If you read any of the biographies on Hoover, you find they contradict each other more often than they agree. [So] you start identifying where they really disagree. You know that’s where you need to start poking first. For me, that means finding firsthand sources first. There aren’t a whole lot of those, but there are some.

“At a certain point, once you’ve read enough people’s biographies who might pass along firsthand accounts, you start to come to conclusions about who the man was. For me it was always important to answer that essential question: ‘Why?’ I know [Hoover] attained a lot of power, and he maintained that power for longer than he probably should have. I was so curious as to why. It was a creepy feeling because I have hard feelings about so much of what he did, and I [found myself] starting to empathize with him.”

Eastwood didn’t have any trouble maintaining an emotional distance from Hoover, but learning about him, despite the many conflicting accounts of his private affairs, was the part of the process the director relished most. “It was fun to delve into a character you’ve heard about all your life but never really knew, and try to sort that out,” he says. It is also a responsibility he takes very seriously, which accounts for his insistence on vetting the details.

“You get to learn something about the people and watch the actors — we’re all putting our stamp on history with our interpretation of it. I’m sure a lot of things didn’t happen the way they did in this film, but they’re probably pretty close.”

J. Edgar is now playing at the Century San Francisco Centre, the AMC Van Ness and the Sundance Kabuki Cinemas. For tickets and showtimes, click here.