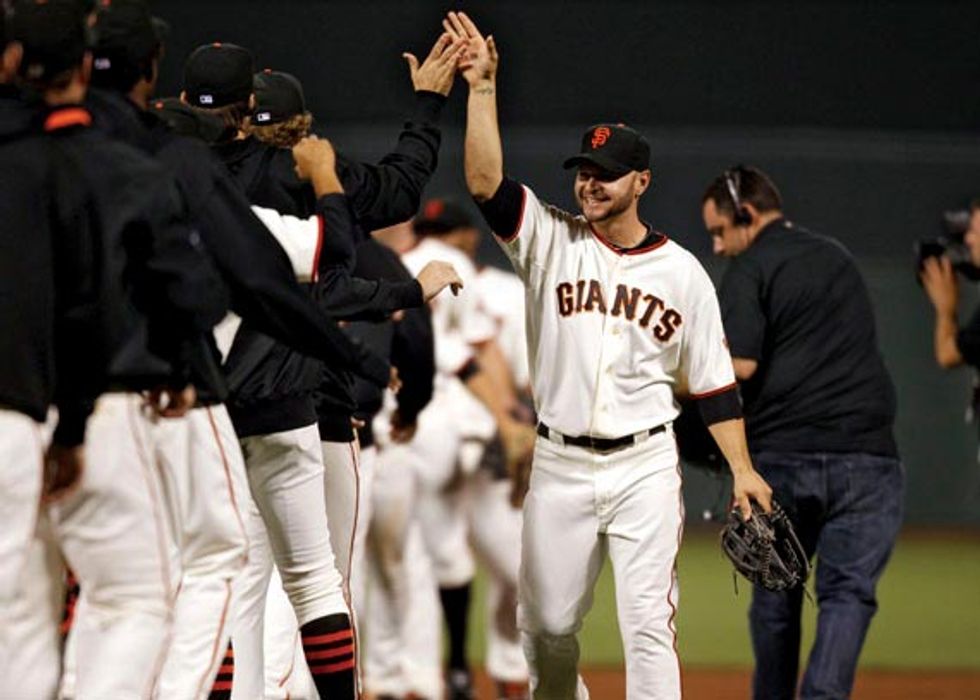 The Giants’ Cody Ross has proven that timing is everything. The outfielder, who swings with his right hand and throws with his left, joined the team in late 2010 from the Florida Marlins and quickly proceeded to drop jaws with his batting skills. In the post-season, Ross rang up five home runs, five doubles, and ten RBIs. Considered the Giants’ greatest October hitter since Barry Bonds in 2002, Ross was named MVP for the National League Championship Series and helped his new team win the World Series for the first time since 1954. Ass-kicking aside, the sincerely modest Ross, who is signed to the end of the year for a handsome $6.3 million, hasn’t let success go to his head. He approaches the 2011 season with cautious optimism, realizing the team has to prove itself all over again—this time with reality TV cameras following them into the locker room.

Before baseball you wanted to be a rodeo clown.

My dad was in the rodeo. Team roping was his sport, but I always found the clowns to be the most interesting. They were fearless and always put their lives on the line to save the cowboys from getting trampled. When you’re a clown, you have complete control over your actions. I never had any desire to ride a bull.

Tell me about the moment when you decided to pursue baseball as your career.

My dream was always to become a major league player. I remember sitting at my house in New Mexico with my mom and dad, going over the pros and cons of playing college versus pro ball. Even though my college education would have been fully paid for with a baseball scholarship, I decided to skip school. I had to chase my dream and go for the pros. The signing bonus didn’t hurt either.

Who were your favorite players growing up?

There were so many, but I’d say my top three were Nolan Ryan, Ken Griffey Jr., and Craig Biggio.

What is it like to hit a home run?

There is no other feeling like it. It’s really an out-of-body experience. When the ball hits the bat and you know it’s a home run, you want to stand for a split second and watch, but when I feel it, I just start running.

Do you have any good-luck rituals or tokens, à la Aubrey Huff’s red thong?

I’m not really a superstitious guy, but there are certain little things that we all do. I chew gum when I play. If I get a hit, I keep the same gum. If I don’t, I get a new piece of gum.

Do your kids stay up late to watch your games?

They’re only 4 and 2 years old, but they go to every single game in Arizona (where my family lives). They live on the baseball schedule. During the season, they stay up until 11:30 at night and sleep until 11:30 the next morning.

The city went nuts after the World Series win. How did you celebrate?

After the parade, my wife and I went up to Napa with a few other couples to unwind.

What’s a perfect night out in SF?

Getting a nice dinner and relaxing. I really like Gary Danko. I also like the bars and restaurants in the Marina, but the long, grueling season makes it tough to stay out late and party.

How does San Francisco compare to other cities in which you’ve played?

I used to think New York and Miami were the best cities in the U.S., but now I think San Francisco beats them all. It’s a small town with a big-city feel. You can get whatever you want here, from views and history to food and culture. I would consider moving here if I signed with the Giants long-term.

What are the home-field advantages at AT&T Park?

The weather at the ballpark plays a big factor. Visiting teams don’t expect temperatures in the low 50s in July and August, but the Giants are used to playing in the cold during the summer here.

Give us a sneak peek into the Giants’ Showtime reality show.

We’re together as a team for seven straight months, so we act like brothers, but we also fight like brothers. I’m sure a lot of the behind-the-scenes action won’t be aired, but if the network ran exactly what went on, it would be the best show on TV.

What do you take on your hot dogs?

I like regular hotdogs with mustard and ketchup. Sometimes I like to wrap them in tortillas and add shredded cheese, just like I used to do when I went camping in New Mexico. Occasionally, I like bratwurst with a little bit of mustard and chili-cheese dogs. We try to eat well during the season, but there’s nothing like a good chili-cheese dog in the clubhouse before or after a game.

Showtime’s preview of the Giants Reality Series is scheduled to air the first week of April. sports.sho.com