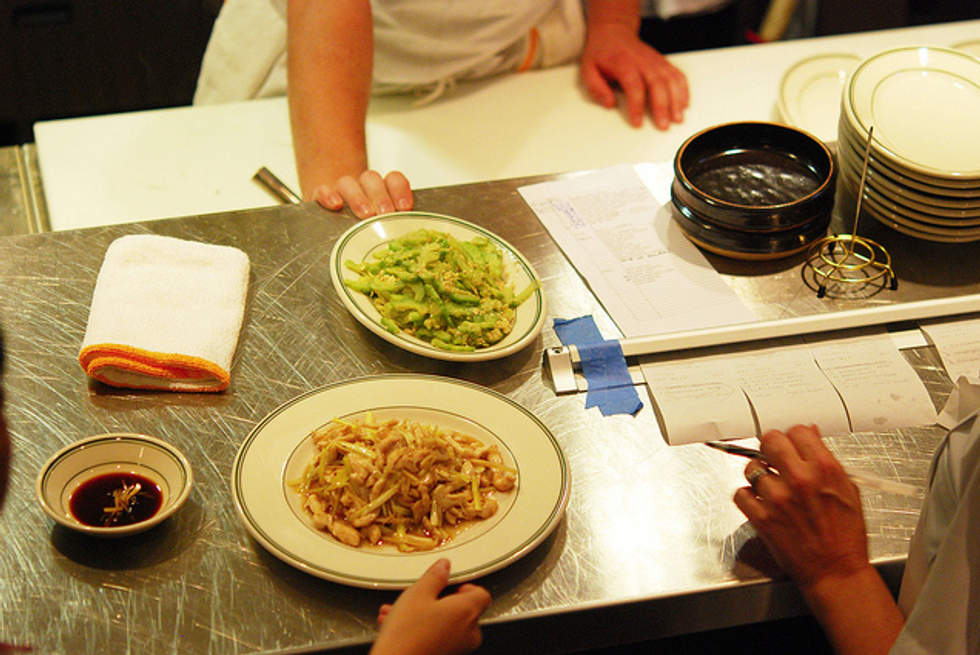 The weather is cooling off and the restaurant world is heating up. The city is about to barraged by new establishments serving everything from barbecue to boba drinks—the majority opening in the insatiable Mission District.

Always knee-deep in restaurant news, I often forget that there are plenty of people who live a good life, oblivious to the fact that Wo Hing General Store has opened its doors. Or even that Wo Hing is located in the original Slanted Door. Charles who?

At Wo Hing on Wednesday night, I eavesdropped as the table next to me played the restaurant one-up game. (Have you been to Sons & Daughters? What do you think of Locanda?) Just as I was marveling at the restaurant knowledge stored away in the brains of so many locals, I observed a perfectly hip, young couple wander by, curiously go up to the menu to check out this new place that they'd just noticed, and then say, "Wow, it's expensive!" And walk on. It's good to get perspective.

At Wo Hing, waiting for a table and famished, I had a very strong, good cocktail called The Brooklynn (rye whiskey, amer picon, dry vermouth, maraschino). There are no seats at the bar and I could have used one. Some boiled peanuts, which seemed to have been infused with star anise, took on the booze in my system and gave me a leg to stand on.

I prefer to separate my cocktails from my dinner (a topic for another day), so I polished my drink right as we were lead to our seats upstairs. For dinner, we tried Shanghai soup dumplings, spareribs, beef jook, scrambled eggs with chopped pork, poached yellow feather chicken with ginger sauce, and water spinach with chili and loads of garlic (do not attempt this dish on a first date).

While the cocktails are served in delicate, vintage-esque glassware, the simple, and generally pretty traditional Chinese food, is served simply on chunky, Chinatown-style diner plates. It's too early to make serious calls on the food and service, but I will say that barring prices, which are going to throw some people, barring some elements of the interior (I could do without the carpet upstairs, the sprayed ceiling, and the ice-cold, steel banquettes), I enjoyed the food a lot. Context, in some instances, helps. The poached chicken was too simple and bland for my husband's taste, but I loved it because I've had it at many a Vietnamese restaurant, actually, so it was a familiar, delicate, comfort. And the jook was just what the doctor ordered yesterday when I had the leftovers at work. The dumplings were very good too.

Boiled peanuts (segue) can also be had at Boxing Room, which is where I ended up last night. The first time I ate dinner here, I sat at a table. But for this Louisiana-inspired restaurant, I'd recommend the bar, which is where we ended up last night. Chef Justin Simoneaux's food is the kind you want to have a cold beer with, the kind of food you want to hunker over like you can do at a counter. The duck and sausage jambalaya, topped with a confited leg of duck that had been crisped up, was dirty, rich, earthy, and gamey—and generally out of this world. I'm sorry to say that you're going to have to wait almost a week to go and get it. It's the Thursday special.

Dish of the week: Duck and sausage jambalaya.