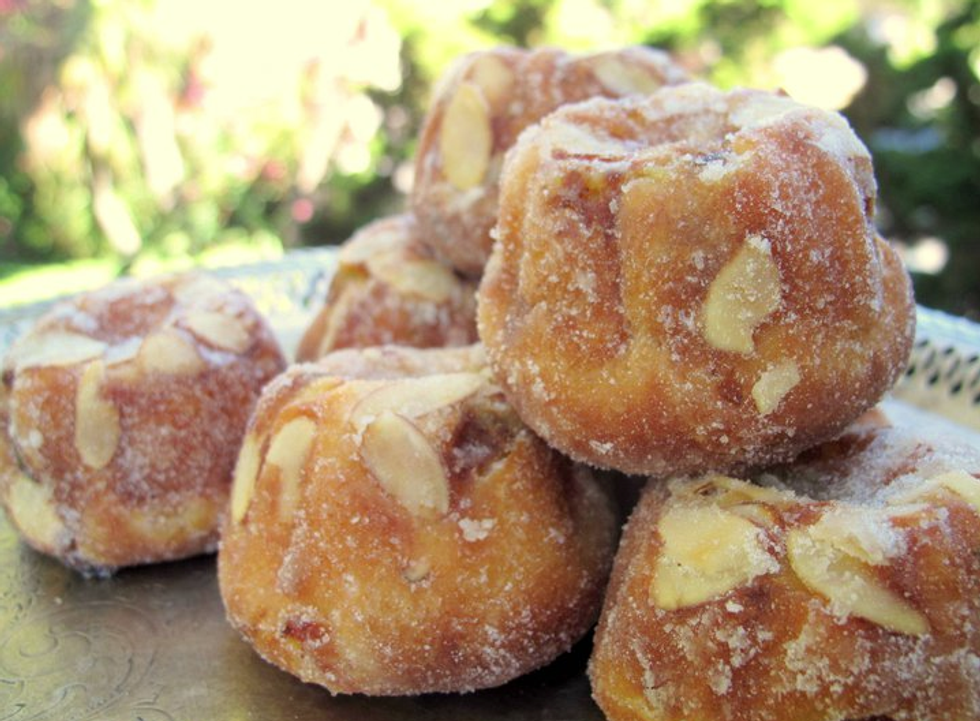 The beauties you see above here, dotted with apples and rolled in sugar, are the kugelhopf (is this one of those singular/plural words, like deer?) made by pastry chef Belinda Leong. I'm a tad late to the Leong worship. Everyone's been going nuts for her pastries since she started selling them at Four Barrel. I took a bite of this lovely pastry and it tasted suspiciously similar to a morning bun. It turns out that this is no coincidence. Leong is also making kouign amann too. According to a tip-off from Four Barrel owner Jeremy Tooker, starting soon, you'll be able to get Leong's pastries regularly at the coffee shop.

Which one should be in the Big Eat 2012? The kugel or the kouign? And how do you pronounce kouign amann anyhow? (This guy is no help.) These are the deep thoughts that keep me up at night.

On top of finishing up the Big Eat, I'm in the thick of research for our "Best New Restaurants" story which will debut in our February food magazine issue; print is not a last-minute beast. I went to AQ in SoMa on Wednesday—what a pretty, warm space. It needs a bit more time to iron out the kinks. I've been to the Mission's Southpaw BBQ which has great, friendly service, the same trendy chicken feeder lights that are also hanging at AQ, serves up solid braised pork shoulder and stiff corn bread that to my mind would have been better replaced by a couple slices of Wonder Bread (in true Southern fashion). It was all served on a metal tray that seems to be saying "prison chic." With the Hog & Rocks guys opening their own barbecue place soon, right around the corner, I expect there to be some sauce slinging and regionality-trash talking soon.

Which brings me to the kinds of things keeping NYC's Danny Meyer up at night. Yesterday, doing research for another story I'm working on on the subject of customer service in SF, I did a phone interview with the acclaimed restaurateur and hospitality guru of Union Square Hospitality Group. Off topic, he told me that they sell Four Barrel at his new restaurant Maialino. "It’s incredibly controversial," he said. "I liken the flavor profile of their coffee to a California wine. And if you have an old world palette—which many New Yorkers do—there are just as many people who hate it as love it." A little Third Wave scandal.