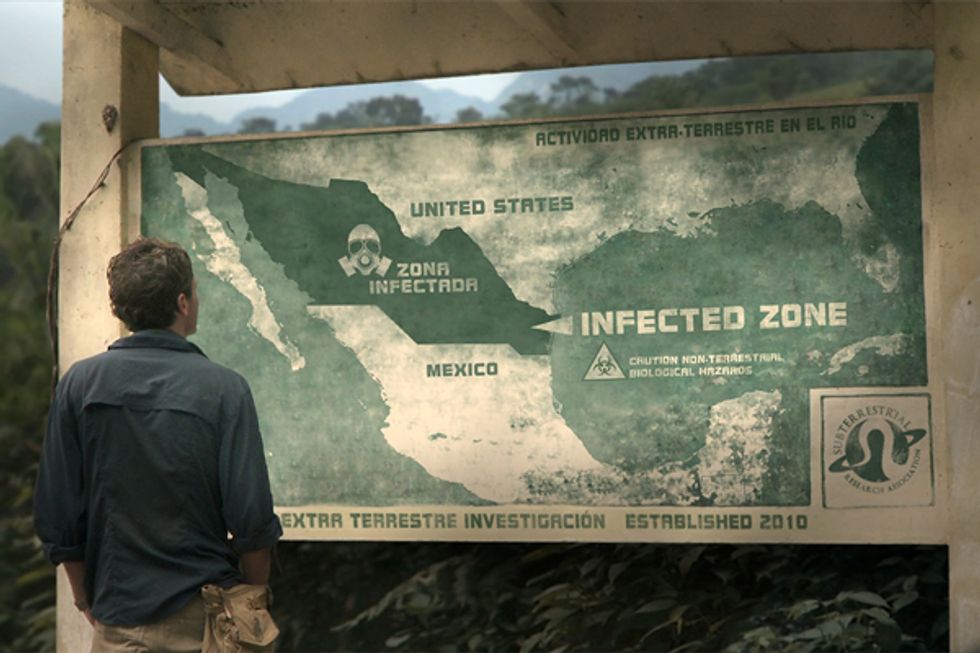 It was routine mechanical failures and budgetary restraints, more than divine – marine? –  inspiration, that led a young Steven Spielberg to keep his shark from audiences throughout so much of Jaws. In the case of first-time feature director Gareth Edwards, the choice was dictated by necessity: To make a $15,000 movie about monsters, the monsters would have to stay scarce.

Monsters is no Jaws, but the comparison is apt on one level: Edwards, like Spielberg, manages to sustain tension even in the absence of early or frequent payoffs. Rather than unleashing his beasts, Edwards hides them, letting the threat they pose loom in their absence. The shadows are pregnant with peril.

Six years have passed since a race of squid-like giants have landed in Central America and infested the place. Life goes on, albeit uncomfortably: Everywhere we see rubble, destruction and urgent efforts to stem the bleeding. Emergency relief is a full-time job with uncertain long-term prospects.

Andrew (Scoot McNairy) is a photojournalist there to capture the misery. Shots of an actual monster are worth big bucks in the U.S., conveniently barricaded against the threat by the world’s newest wonder, a wall more massive than China’s. He’s also there, however reluctantly, to rescue his boss’ daughter. Samantha (Whitney Able) is stuck in Mexico, and has a wedding to attend back in the States.

So begins their long, mostly monsterless journey, during which Samantha accuses Andrew of cynically exploiting a tragedy; watches him get sloshed; walks in on him with a girl; and, after he manages to lose their passports and most of their money, falls for him. That sounds improbable, but the script, which Edwards wrote, and his two stars, who offer unaffected performances and share genuine, sometimes heartbreaking chemistry, make the romance seem natural.

Is it interesting? For the most part, but while Edwards skillfully ratchets up the tension, the absence of resolution threatens to grow tedious. At some point, a movie called Monsters needs to bare its tentacles.

When it does, the director’s last-minute suggestion that his giant meanies might really be misunderstood innocents, unfairly persecuted by a fearful humanity, rings false. The implication is clear enough – it would seem to lend Monsters a component of social metaphor concerning the us-vs.-them, secure-our-borders mentality. Yet the metaphor falls apart, mostly because Edwards’ visitors really are monsters, killing often and indiscriminately.

The movie is tense, engaging and thought-provoking enough without such a weak attempt at ironic relevance, and as a doomed post-apocalyptic romance it leaves you aching. For those who prefer more monsters in their monster movies, I refer you to this summer's Predators.


Monsters is now playing at the Lumiere Theatre. For tickets and showtimes, click here.