Drinking in History at the Hancock Room 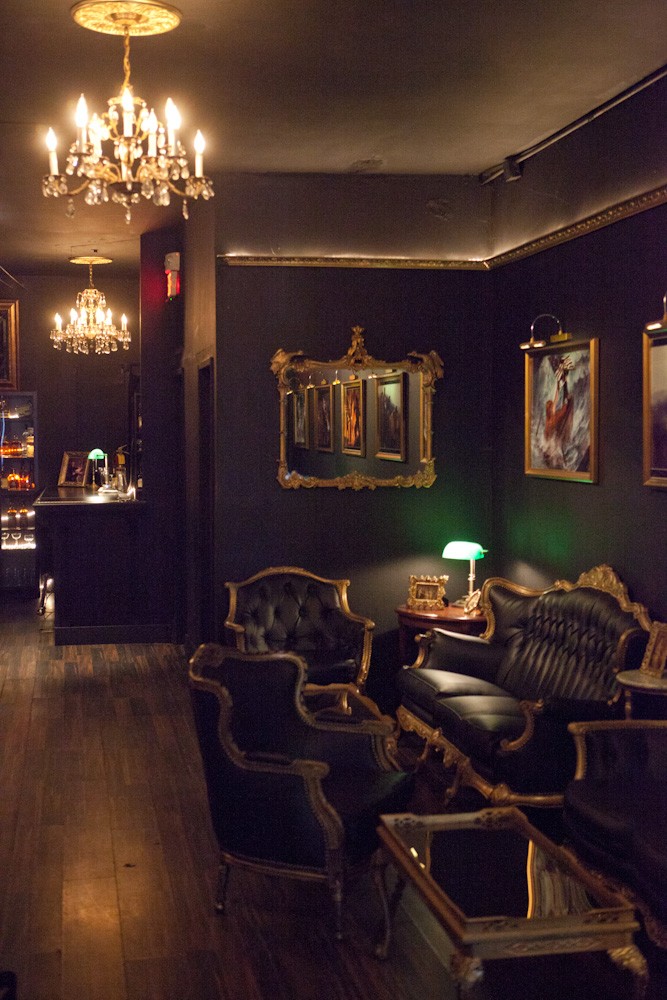 Previous Next
A view of the Hancock Room. (Photos by MB Maher) 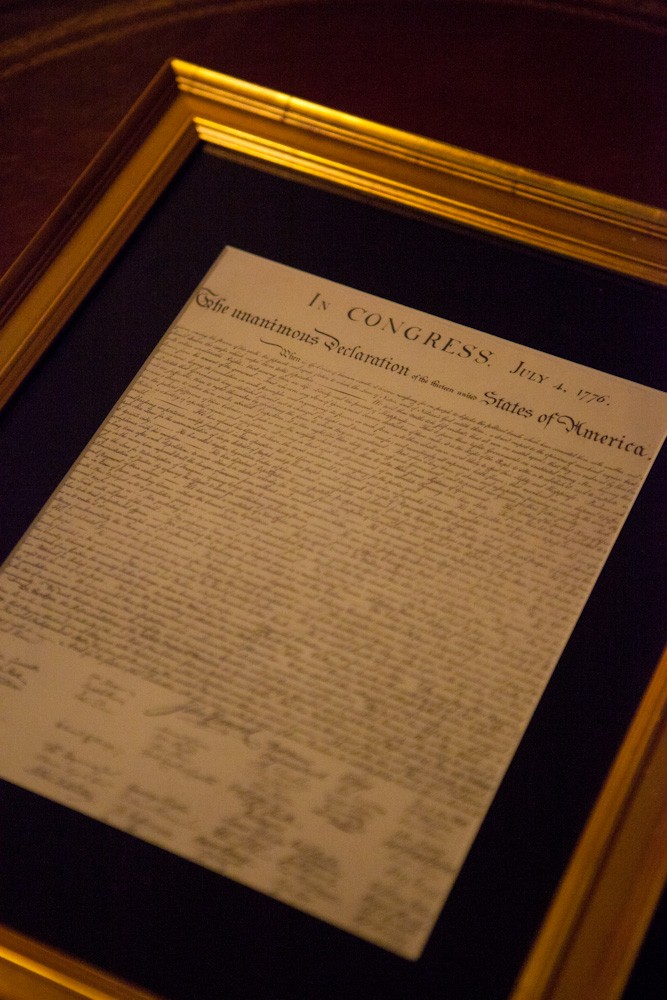 Previous Next
The Declaration of Independence adorns the wall. (Photos by MB Maher) 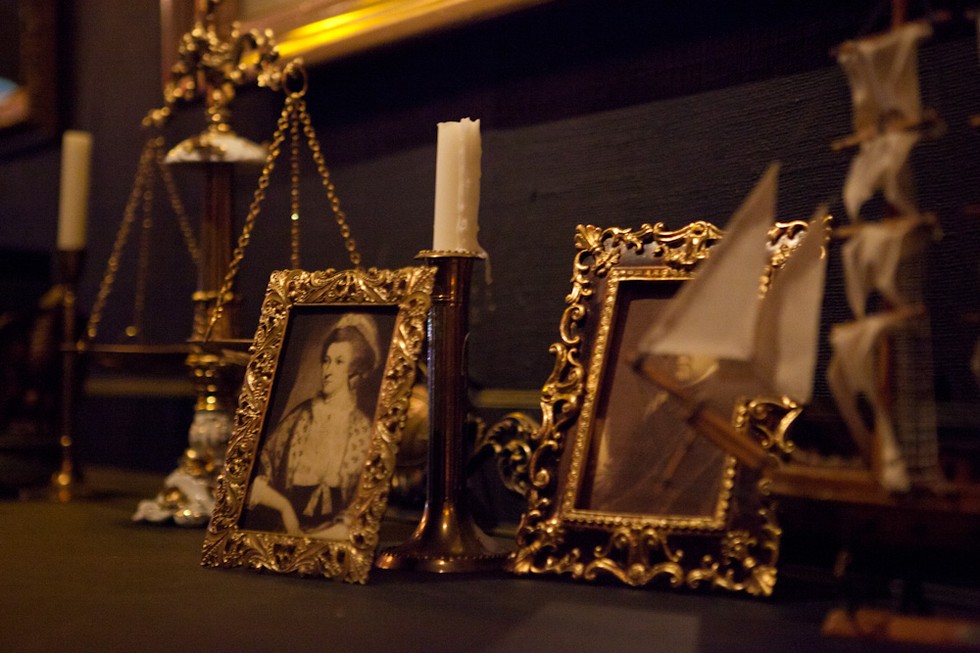 Previous Next
Photos of John and Abigail Adams on the side table. (Photos by MB Maher) 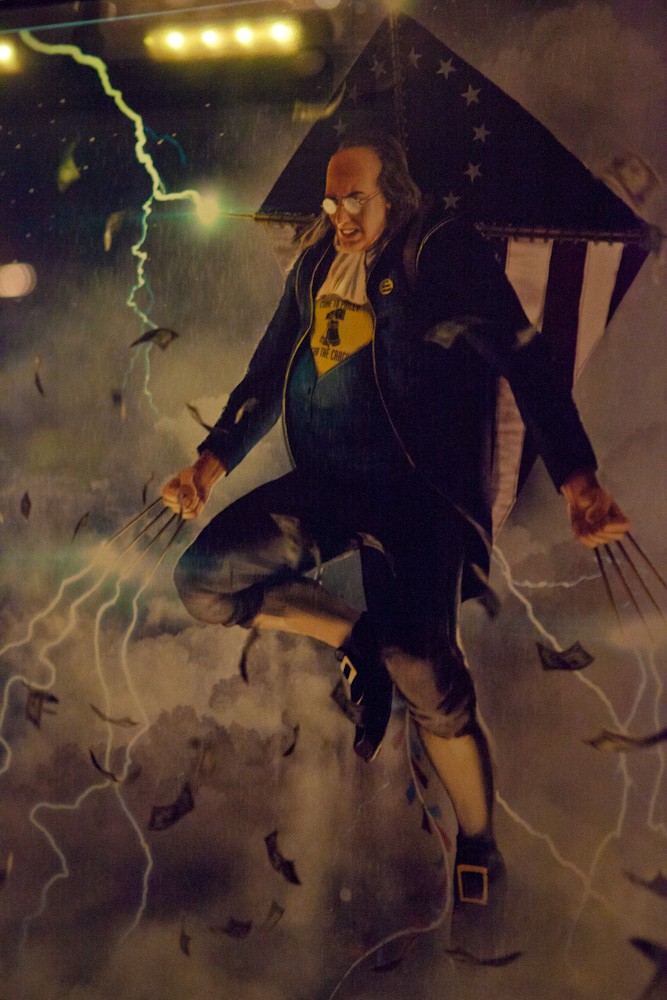 Previous Next
Ben Franklin as lightning-powered action hero in a painting by Jason Heuser. (Photos by MB Maher) 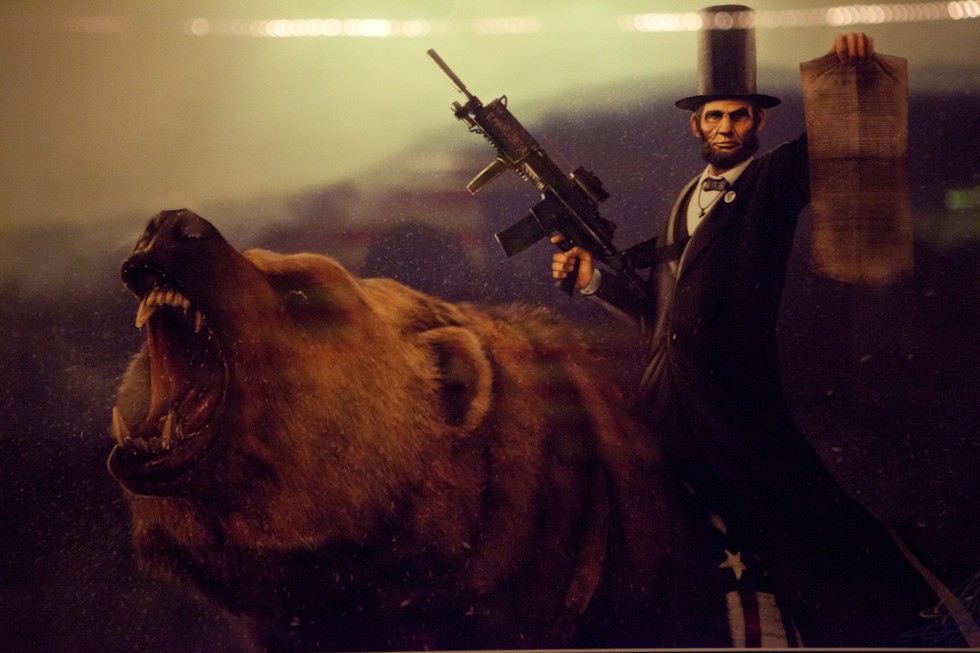 Previous Next
Another Heuser piece, with Abraham Lincoln riding a bear. (Photos by MB Maher) 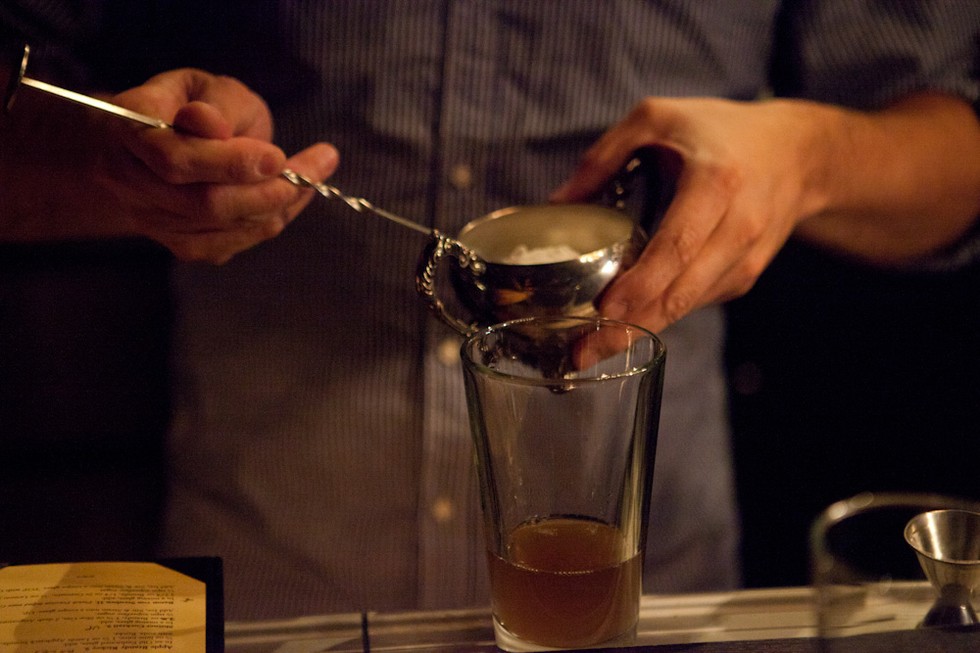 Previous Next
Owner John Eric Sanchez adds a bit of sugar to his St. Charles Punch. (Photos by MB Maher) 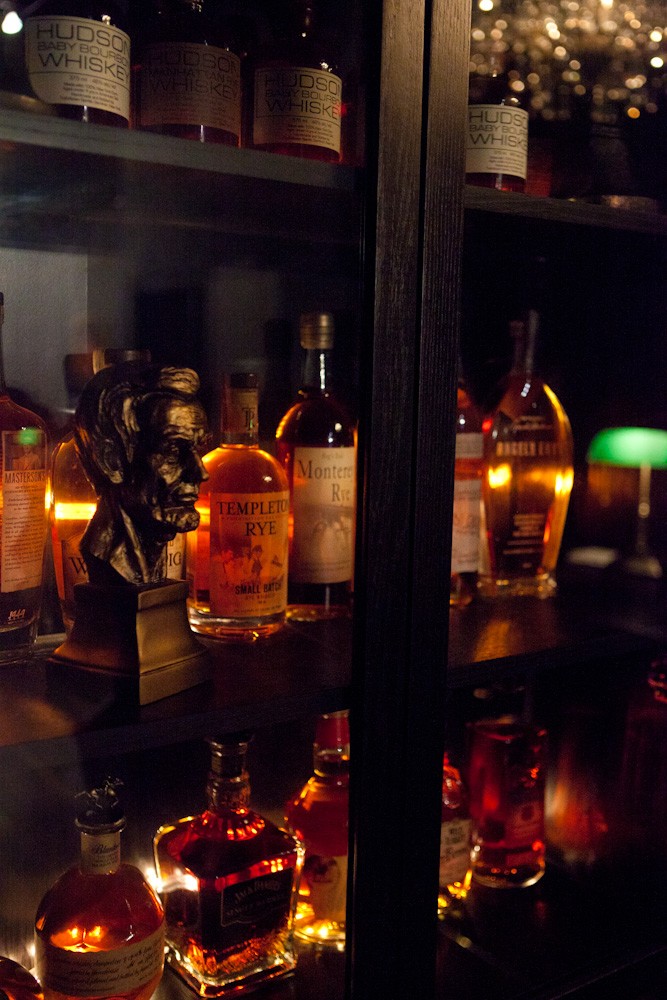 Previous Next
The credenza, stocked with rare whiskies. (Photos by MB Maher)

For a bar with a colonial theme, it's not surprising that The Hancock Room has numerous Founding Fathers adorning its walls. George Washington, Benjamin Franklin, and Thomas Jefferson are all here, outfitted in their best britches and powdered wigs. But a second look at the founders' portraits reveals that something's just a bit off. Franklin's famed kite now serves as the backdrop for some newly acquired Storm-esque electrical powers, Washington's got an AK-47 aimed on a herd of zombies, and Jefferson is delivering a right hook to a gorilla.

The mix of reverence and insousciance in the colonial paintings (courtesy of local artist Jason Heuser) is all part of the fun of the Hancock Room, which blends tasteful old furniture, antique flags, and framed copies of the Declaration of Independence with kitschier touches, like a soundtrack of classical quartets covering Nirvana songs. The space originally hosted large groups for owner John Eric Sanchez's neighboring Sip Bar & Lounge, but it's been spun off into its own entity, providing a quieter respite for weeknight drinks when Sip is closed.

The Hancock Room pursues a more mixology-oriented direction than the Sip mothership, focusing on revamped versions of classic drinks with a heavy emphasis on brandy. "Brandy was one of the first spirits in the colonies, because fortified wine took up less space and kept well on boat trips," says Sanchez. "There was plenty of fruit in the New World, so farmers also began making their own brandies out of native fruits like apples and cherries." The Hancock Room's drinks incorporate a wide variety of fruit brandies, from the Dolly Madison (brandy, lemon juice, creme de cassis) to an apple brandy rickey made with Laird's applejack. There's also a sizable selection of gin, whiskey, and rum cocktails, and an emphasis on local beers and spirits from producers like Anchor and St. George. A large credenza in the back stocks a variety of small-batch American whiskies, as well as a few old bottles Sanchez picked up at flea markets (including a giant glass Liberty Bell filled with brandy).

In keeping with the highly civilized aesthetic, Sanchez opted to make the Hancock Room reservation-only, keeping both the volume levels and the wait for a drink to a minimum. (Reservations are taken via e-mail, preferably at least 48 hours in advance.) There's no food, but drinkers are encouraged to bring in snacks from nearby spots in Chinatown and North Beach.

For Sanchez, a self-described "American history buff," the space is an opportunity to celebrate not only San Francisco's history, but the nation's as well. "We treat the Founding Fathers like they're untouchable, but they were really just normal guys. I hope people can come in here, see these paintings, and think, 'I'm a normal guy. These are normal guys. What can I do to make a difference?'"