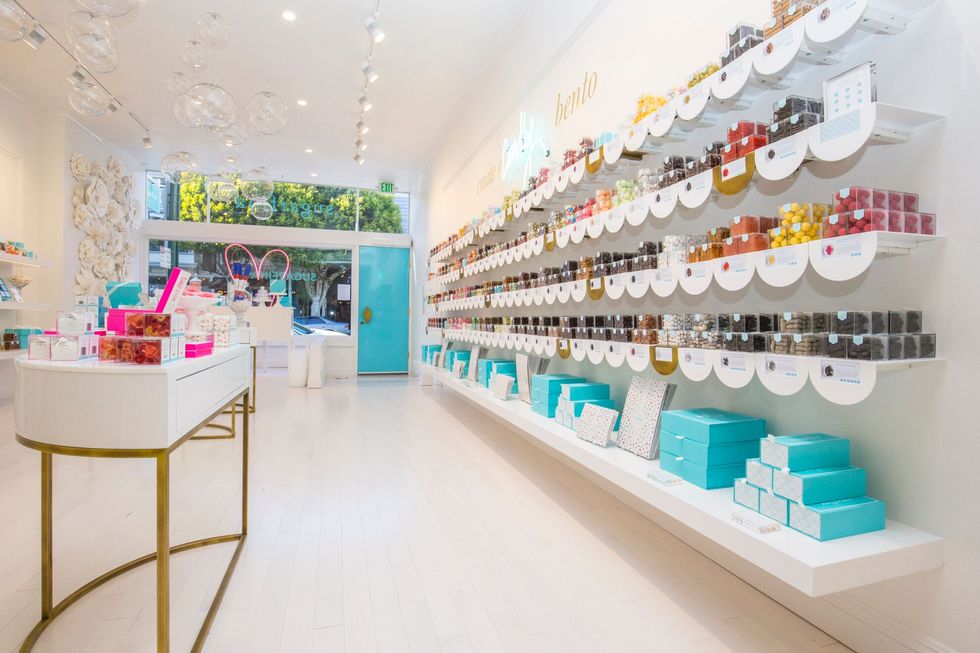 Where can you find bourbon marshmallows, raspberry chili licorice, and Champagne bears? Only at Sugarfina.

There's a jaunty cuteness about the Sugarfina candy shop on Union Street (and the company’s newer popup on Sutter) that belies the formidable labor behind the endeavor. Take, for example, the little signs the staff place on shelves to indicate that a particular item is out of stock: "Stuck in Traffic" the placards say, or, "Working on my Screenplay” or another tongue-in-cheek placeholder. The owners themselves are unavailable in their shops this month, not stuck in traffic, but on a scouting mission in Italy and France, and visiting the factories of their Italian candy makers who have been in business for centuries.

Gooseberry, crème de cassis, honeydew melon, and Italian rosewater are just a few of the flavors that make their way into the confections of the company founded by sweethearts Rosie O’Neill and Josh Resnick. There are gummies in the shape of tiny Cadillacs and dark chocolates in the shape of vintage cameras. Cocktail flavors are among the company’s most popular, including Champagne bears and single malt Scotch cordials. A negroni flavor is in development.

Sugarfina’s Cuba Libre candy, which contains cola and spiced rum, was the sample of the day the second time I visited. I had walked out without making a purchase the first time, and tasting the Cuba Libre marked the moment I stopped chuckling at the chic whimsy of the shop interiors and started paying some respect. Their creativity is daunting. It’s as if a bunch of overly imaginative grownups held a weekend brainstorming retreat to reinvent candy and ended up with a wall covered with Post-It notes: Bourbon Marshmallows! Fuji Apple Caramels! Dark Chocolate Pomegranate Seeds! Raspberry Chili Licorice!

Maybe they lost you on that last one. Licorice is what O'Neill diplomatically calls a "niche-appeal candy. The people who love it tend to be very passionate about it." One customer was so distraught upon learning that a particular variety was being discontinued (the small manufacturer from which it was sourced was going out of business) that she bought up the remaining stock for $400. Passionfruit licorice is a brand new item from Denmark, and the Sugarfina folks are proud to be the only U.S. candy store to carry it.

More to your liking might be the s'mores bites: marshmallow orbs covered in milk chocolate, then rolled in graham cracker crumbs. One evening on a whim, O’Neill discovered that when microwaved for about 15 seconds the chocolate gets melty and the whole thing takes on a convincing toasty-ness.

The Aphrodite kumquat features a candied kumquat from Corfu which is covered first in a layer of chocolate and then a thin sugar shell. The Sugarfina folks source their goodies from all over Europe: Poland, Finland, France, Holland, Italy. But the tiny colored sugar flowers called Kyoto Blossoms are from about where you’d expect. A traditional Japanese symbol of hospitality, these candies are served by the Japanese emperor to important guests, and are an exclusive Sugarfina import in the United States.

International expansion is at this point just a whisper, but Resnick and O’Neill clearly have visions of (violet brandy-infused) sugarplums dancing in their heads. // 1837 Union St and 272 Sutter St, sugarfina.com