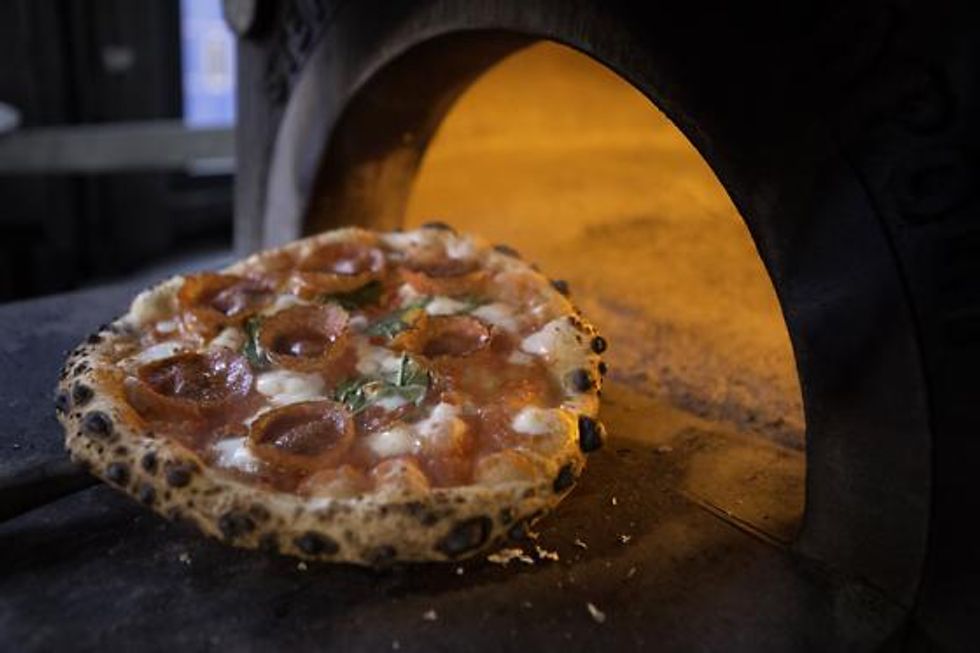 It’s well known among food folk that the barometer for any legitimate pizza place is the quality of the margherita—the Italian original, purported to have been created in celebration of its 19th century Queen by the same name as a culinary representation of the Italian flag, is the classic pie distilled down to its most essential parts: tomatoes, mozzarella, and basil. The minimal ingredients call attention to their quality, and, more critically, the skill of the pizzaiolo. Chef Jon Darsky has been perfecting his version in the back of a truck since 2012, and the one that was formed in front of us at the new brick and mortar Del Popolosignifies its arrival as one of the best pizza places, nay restaurants, in the Bay Area.

Of course, the Del Popolo on wheels was no average food truck—it famously cost $180,000 and housed a two-and-a-half ton Stefano Ferrara oven from Italy. But one would expect no less from Darsky, who trained at Oakland’s Pizzaiolo and Pizzeria Delfina and was the founding pizzaiolo at Flour + Water prior to setting out on his own. Darsky churned out beautifully blistered Neapolitan-style pizzas to eagerly awaiting masses that waited in ungodly long lines everywhere from Off the Grid to SoMa street corners. And so the expectations for the Nob Hill location were high, and to my great enjoyment, deliciously exceeded.

Clearstory windows expose a bustling interior to the quiet block, beckoning passersby to join the ranks of twentysomething crews, cozy couples, and oil painted portraits that peer down from the walls inside. Original fir floors add warmth to an otherwise industrial setup, with painted concrete walls and steel-framed tables and stools. The wood-fired brick oven (an Acunto imported from Italy), is the core of the space, set in a soft navy alcove backed by an archway filled with almond wood, which fuels its 900-plus-degree fires.

The wood burns hot and fast— “just how we like it,” chef de cuisine and pizza maestro Jeffrey Hayden (formerly of Oakland’s Boot and Shoe Service) assures me as he casually finesses dough into our future meal, making our fireside seats at the semicircular marble counter mere feet from its flames quite toasty. The pizzas it churns out are arguably better than their mobile counterparts: sliced while still bubbling, having been freed from their fiery inferno seconds before, they arrive among an aura of candlelight, with Jay Z’s “Empire State of Mind” just audible over the jovial din. The festive atmosphere amplifies the pleasure of each slice, the trademark margherita offering the quintessential combination in all its glory, while the winter squash (mascarpone, spring onions, bacon, rosemary) is an opinionated celebration of the season’s hearty flavors perfectly balanced by sweetness and salt. All seven of the pies on the menu are made with Darksy’s preferred native yeast, giving the charred, bubbly crust a toothsome loft and unique character all its own.

While the pizzas are indeed notable and among the best in town, what makes this place worthy of all its present and future accolades are what precedes them on the menu: an array of antipasti so varied and intriguing, they are a dazzling smorgasbord of options that could easily fulfill a pizza-free dinner. Fuyu persimmon and chicories balk one’s idea of a pizza joint starter with a Mediterranean accompaniment of pistachios, mint, and yogurt that’s more savory than one might expect—and not to be missed. Broccoli gets roasted in the oven, then served up with pickled ramps, ricotta salata di bufala, chili oil, and breadcrumbs. Hush puppies seem random but are definitely worth indulging, with more flavor than any from memory, made from Anson Mills polenta with a housemade hot sauce that “bites back,” according to Hayden (he’s right).

Wine and beer mimics Darsky’s fascination with fermentation, with no inoculated yeast to be found on either list. GM Essam Kardosh recommended a bottle of 2013 Tinta Amarela, Envinate from none other than the Canary Islands, where every vine “is older than your grandmother,” he says, having been flown in from Spain prior to the phylloxera fly epidemic that decimated the country’s stock. It’s a fabulous choice, and the rest of the list reads as interesting, having been culled by Oakland’s Ordinaire Wine Shop & Wine Bar. Dessert options include ice cream scoops via the fine folks at Mr. and Mrs. Miscellaneous (in flavors like pistachio and blood orange sorbet) and a pot de creme that’s worth saving room for.

When all is said and done, Del Popolo has stolen my heart, both with its concise menu filled with only outstanding dishes and a jubilant feel representative of everything that makes eating out fun. In short, it’s on the short list (the good one). // Del Popolo, 855 Bush St. (Nob Hill), delpopolosf.com