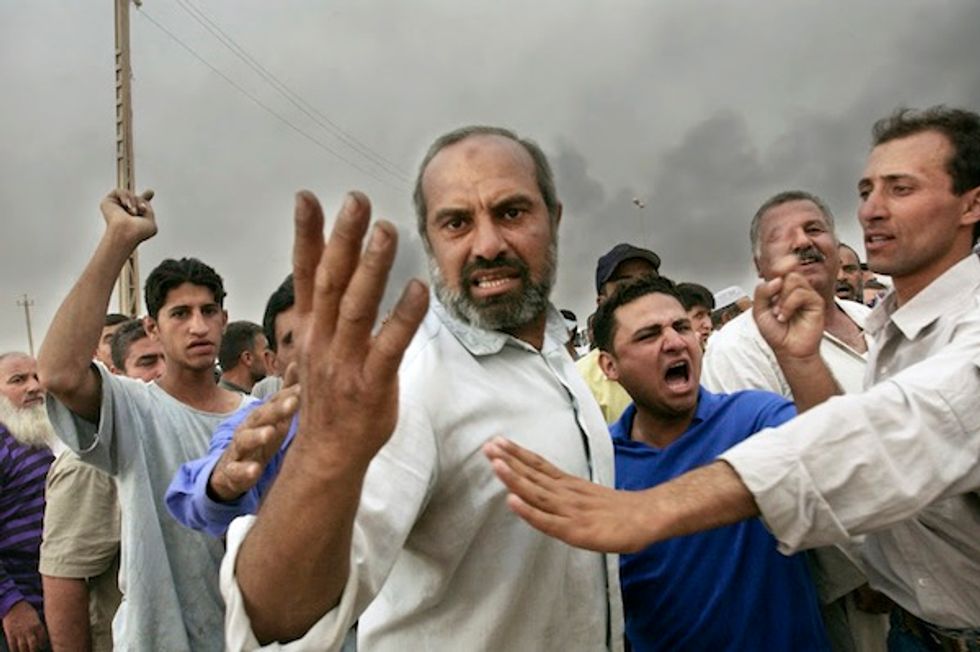 "Eye Level in Iraq" at the De Young Elevates Photojournalism

Kael Alford and Thorne Anderson are photojournalists rather than fine art photographers, per se. But, as is not uncommon when image-makers far exceed the expectations of their genre, the art world is where they have wound up. Eye Level in Iraq, their collection of photographs documenting the US-led invasion of Iraq and its aftermath, is one of the most compelling exhibitions the De Young Museum's young photography department has shown.

Be forewarned: The scenes here are predominantly ones of utter misery. Alford and Anderson went deep into the fray to expose the rubble resulting from American "Shock and Awe" attacks, the hospital-cum-deathbeds of civilian victims, and the general social chaos that quickly became the country's norm. In one photograph, a wealthy family stands sentinel, automatic weapons locked and loaded, outside their home to ward off looters; in another, female university students, aware of being prime kidnapping targets, hole up in one of few friendly cafes. On the more radical end of the spectrum, we see veiled women take up arms, prepared to support a fundamentalist militia in conflict against the US-installed interim government.

One of the wall texts notes that, by many accounts, Baghdad is currently the most dangerous city on the planet. Looking at these photos, it is plain enough to see.

Through these clearly hasty (yet, given the conditions, virtuosically well-framed) and often surreal shots, Alford and Anderson give an alternative account of Iraq's recent history. It more or less aligns with the story that appeared in the major media outlets for whom the photographers were working, but goes deeper, taking viewers well beyond the borders of the embedded journalist program and toward the territory of Iraqi consciousness.

This consciousness, which these images and their corresponding explanations suggest, knows nothing apart from conflict; conflict is its world. One photo shows a room of school children reenacting a recent battle between the US and Mahdi army, as children in the United States might depict the American revolution. Importantly, the photographers take care to indicate that this world of violence predates the George W. Bush administration. In several photographs, we find Iraqis searching newly-accessible mass graves for family members killed during Saddam Hussein's campaign against Shiite uprisings in the early 90s, or scanning previously secret government lists of disappeared people.

Eye Level in Iraq takes on an unpleasant duty in an American museum, forcing visitors to reflect on the hand their government has played in the photographic subjects' ongoing trauma. The policy questions raised by this are always worth revisiting. More directly, however, Alford and Anderson ask us to try to comprehend something else: Namely, what it's like to have lived with conflict for so long, and to have to bear up to continue doing so for the foreseeable future.