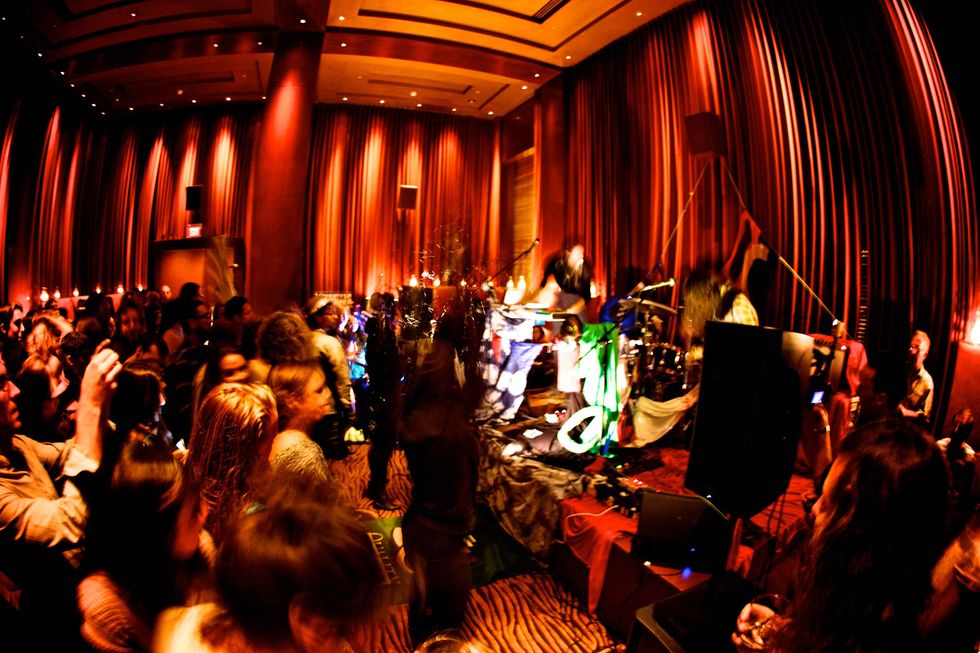 Some of San Francisco’s most prized institutions are its live music venues. Think about it: The Fillmore, Great American Music Hall, Davies Symphony Hall and others have all served as proving grounds for the world’s best artists, musicians, and social influencers. It should come as no surprise, then, that San Francisco is rich with places where live music lives and thrives, even when you’d never guess it. Here are some unexpected gems around town to catch a show at this week.

Redwood Room at the Clift Hotel

This uber-swanky downtown hotel hosts regular DJ nights and the occasional concert series, in addition to the general assortment of casual hotel entertainment. Occasionally they’ll get surreal and book a NBT band to really rile up the guests sleeping above. A few years ago I saw up-and-coming Brooklyn band Cults, who at that point were taking over the blogosphere, for free, late on a Sunday night, because sure. // 495 Geary Street, morganshotelgroup.com

Don’t be deterred by the “NOPE” sign outside of this ridiculously fun and life-affirming Bernal dive. The Knockout might play hard to get, but it’s always worth the price of admission (usually $5-10). The venue typically hosts esoterically themed occasions like “Goth Synth Night,” and more straightforward-but-still-edgy “Oldies Night” … and it’s not necessarily your parents’ oldies, unless they were the hippest kids on the block. That’s kinda the idea here — take the uncool and make it cool.  // 3223 Mission Street, theknockoutsf.com

The back room at Hemlock plays host to under-the-radar local and touring bands du jour. There’s something inescapably alluring about going through a bar’s backdoor and finding yourself in a punk Neverneverland. Things can get sweaty in the small confines, and that’s usually a sign the crowd is acting appropriately. Pop music fans should keep the venue on their radar too. Last year, the critically worshipped indie shoegaze pop band A Sunny Day in Glasgow played to a packed house, as well as celebrated trippy psych-pop collaborators Dustin Wong and Takako Minekawa. // 1131 Polk Street, hemlocktavern.com

Seemingly plucked right out of a European city center, Revolution Cafe is part backpacker destination, part bohemian culture nexus. Grab a cappuccino or carafe of sangria and enjoy whatever gypsy jazz, funk, folk, passing-through busker is traipsing around the intimate confines. On warmer nights, staff open the wide pull-away doors and the merriment spills out onto the Mission sidewalk. // 3248 22nd Street, revolutioncafe.com

Nearly every weekday morning the busking classical violinists, cellists, and trios give commuters relief from the otherwise grim surroundings of San Francisco’s archaic central nervous systems. The thing is, they’re typically quite good, so good you’re not sure they’re participating in some social experiment like this one. Keep an eye out for the Latin American flute player at Montgomery who eases rush-hour tensions, or the old man shredding classic rock songs on his guitar near the stairs above Powell Street Station. The holiday season usually marks the peak period for in-BART shows (as noted in this incredible Reddit AMA with a local busker), so now’s the time to support your local performance artist.