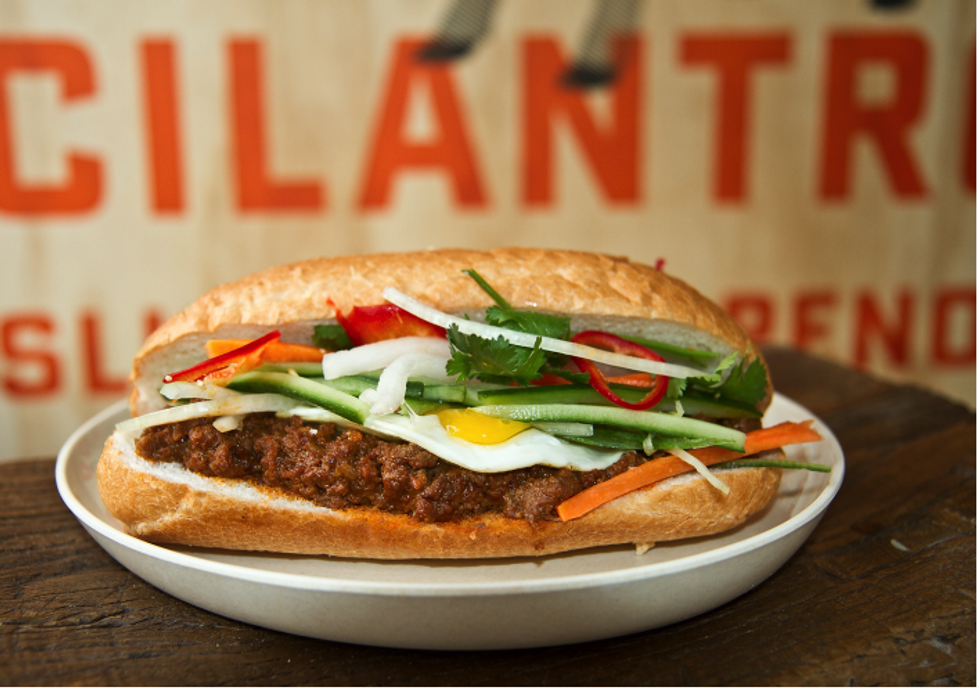 Sometimes I go to a new restaurant and my blink instinct tells me that this one is going to do just fine, even in the dog-eat-dog restaurant world of San Francisco. Restaurants like this often are cheerful, with a gregarious owner at the helm. There's no sense of self-importance, the price point is right, and everything's tasty. It doesn't take the skills of Corey Lee to have a slam dunk.

This is my blink about Bun Mee which just opened in Pac Heights. I stopped in on one of their very first days, not the best time to judge a restaurant. They were slammed—staff running in, their arms full of French rolls driven in from an emergency run to San Jose where their bun baker is located. People were waiting in every nook and corner of the narrow space for their lunch. The chef had had a medical emergency and was out of commission (so they had a temporary replacement from the Culinary Edge, a consulting group that helped develop their recipes). But I could see the potential through the chaos.

Opened by Denise Tran, a former lawyer with no personal experience in the restaurant world (barring her dad working as a manager for 10 years for a New Orleans restaurant called The Coffee Pot and a mom who was a good cook), Bun Mee is a tribute to the classic sandwich Tran grew up eating, even after moving to Louisiana from Vietnam in the 70s as a 13-year-old refugee. Tran, who my blink instinct would label Type A, has clearly experienced an eye-popping learning curve. "Opening a restaurant is way harder than getting a law degree," she said, looking at the encroaching mob of customers.

The restaurant is in a narrow space, with a zinc counter running the length of the kitchen. It's cute without being too cute, with a Vespa theme. There are nine bánh mi sandwiches on the menu (which to me, seems to be about four too many)—none of them particularly traditional, which is Tran's whole point. She's trying to take something she grew up with and add an American twist to it.

I ordered the fried turmeric catfish bánh mi, which was good (though the catfish lost some of its crispiness from steaming in the bun), but the real prize was what she's deemed the Sloppy Bun stuffed with red curry ground pork and a fried egg, plus the usual toppings including Thai basil and jalapenos. I knew I was on my way to have a second lunch with a friend, but I couldn't stop eating it. The glories of ground meat never cease to amaze and this banh mi puts it to very good use. Bun Mee also has a few salads (mango sesame, green papaya), some rice bowls and of course salad rolls (with pickled papaya and crispy wontons inside).

On my way out, Tran slipped me a little cookie: Two wafer-thin chocolate cookies sandwiching sweet coconut cream. She didn't know that I'm a sucker for coconut, but I am. The cookie was perfect. I ate one bite, put it back in the bag for later. Took another bite, and put what little was left back in the bag. Then cursing her, polished it off, with more pleasure than guilt. All in about half a block's walk.

Needless to say, my second lunch at the new Mission District Mayan restaurant, Haltun, was purely in the name of research. I was stuffed.