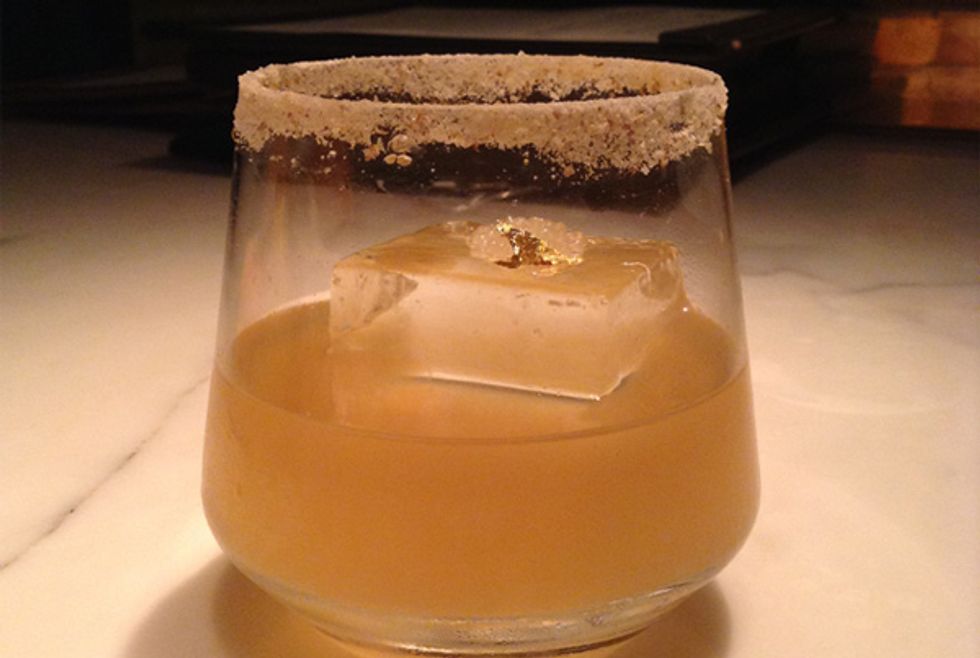 Five of the Spendiest Single Menu Items Around the Bay

'Tis the time of year for blowing your wad, on whatever, so please be advised there are several spots where you could do this most expeditiously via a single, luxe menu item.

Some might say expensive tequila should only be drunk neat, but over at Brasserie S&P at the Mandarin Oriental Hotel they're mixing up a super-Cadillac version of a margarita with DeLeon Anejo tequila. Maybe we should call this a Lamborghini Margarita, but they're calling it The Emperatriz. It's also got Grand Marnier, agave syrup, fresh lime juice, coriander & Maldon salt on the rim, a teaspoon of finger lime "caviar," and gold flake on a fancy, "premium luxury" ice cube.

A proper dinner at Quince always begins with caviar. Their current prix fixe offering ($158 plus $110 for wine pairings) also features Dungeness crab, suckling pig, and venison, and for an additional $85 you can get white truffles shaved on things, while they're in season. Add to that an $18 cheese course supplement, and you're looking at $371 per person, before tax and tip.

For the baller who really likes rum, this is the place to blow a more modest person's week's salary on a single cocktail. Smuggler's Cove barman Martin Cate is mixing up the city's single most expensive libation using 50-year-old Appleton Estate Limited Edition Jamaican rum. It's also the most expensive commercially available rum currently in the U.S.

Another baller's cocktail, this one served high atop the Sir Francis Drake hotel in their famed view bar, is this version of the Angel's Share, featuring a glass flamed with Chartreuse V.E.P., and filled with a mixture of Remy Martin Louis XIII cognac, Charbay walnut liqueur, and Porto Rocha 20-year Tawny Port. Those are some richy rich ingredients there, and they add up. To $200.

They're not advertising it anymore -- in fact, the restaurant is advertising only a modest $60 per person tasting menu, perhaps after backlash over their more luxe options that ranged from $200 to $1200 when they opened -- but Katsu in Los Gatos would still probably gladly take your money for their top-of-the-line omakase menu, featuring several kinds of Russian caviar we don't know how they got their hands on, Wagyu beef, and Pacific Spiny Lobster Sashimi with 24-karat gold leaf. Definitely where you want to go if Sergey Brin asks you on a date.