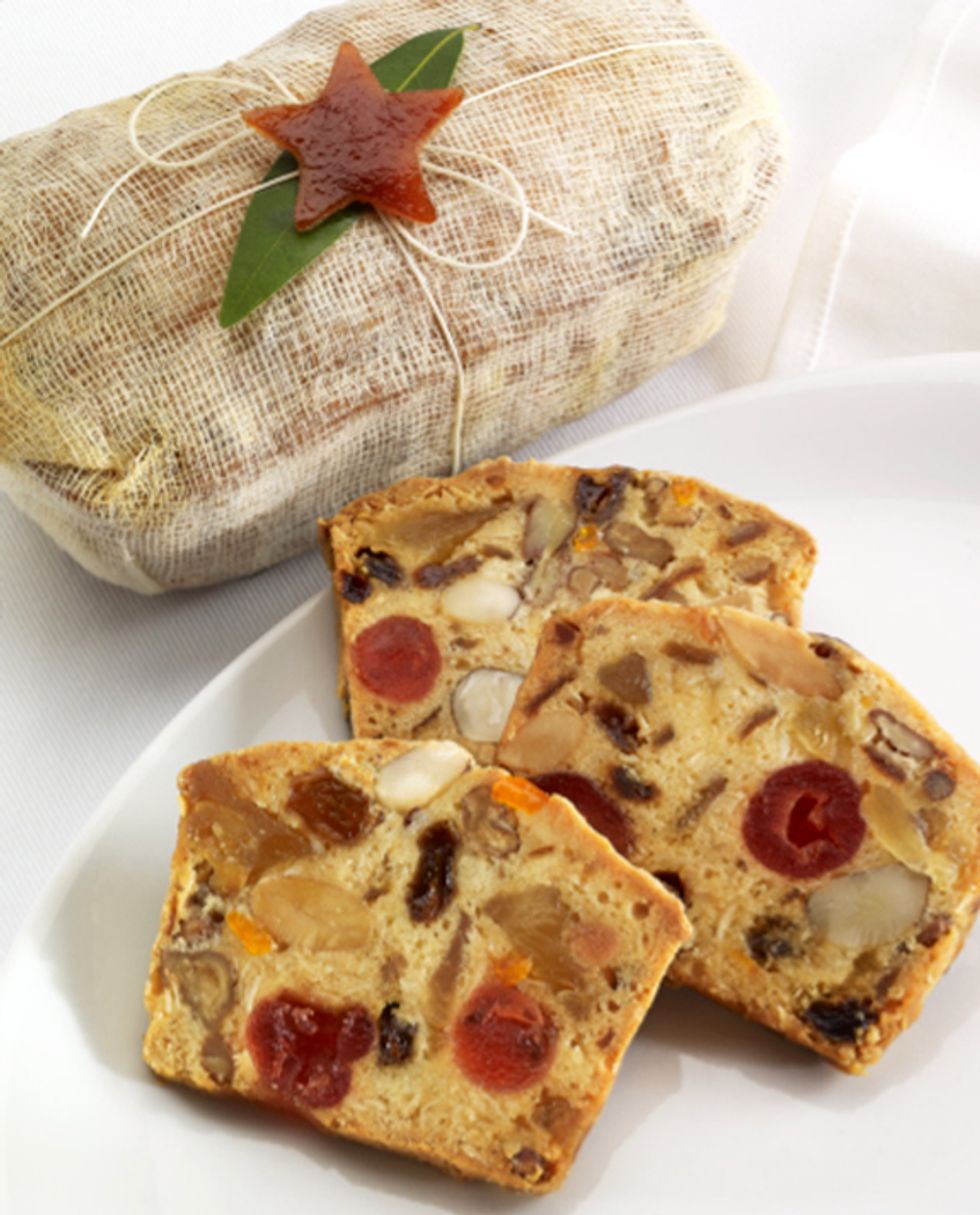 Poor Fruitcake.  For how many Christmases have you been the twice re-gifted door stopper or the impromptu discus hurled at the shoulder of the most annoying relative?

Fruitcake master Robert Lambert may know why. “Most people have only been exposed to commercial cakes with big gaudy chunks of dyed and over-sweet candied fruit,” he says. The cake’s bad rap fortunately does not extend to the Bay Area where Lambert and others spend up to a year crafting supple versions crammed with juicy locally-grown fruits, crunchy nuts and aromatic citrus peels.

Each comes swaddled in cheesecloth brushed in booze (brandy or rum) that makes unpacking one feel like unwrapping a present. How long that present will keep depends on whom you ask. “After a few months, they mellow and are less "hot" from the rum but after that they slowly begin to dry out,” says Becky Courchesne who bakes for Frog Hollow Farm. Lambert likes to age his six to eight weeks but once, he kept one as long as seven years. If refreshed with brandy, June Taylor claims the cake will last for months into years.

Serving suggestions vary. Both Taylor and Lambert advise their cakes be served cold while Courchesne prefers hers at room temperature topped with a triple-crème cheese, crème fraîche or mascarpone. She like coffee with her slice while Lambert and Taylor opt for tea or a dessert wine.

So, if you harbor any fuzzy feelings toward dried fruit, nuts and/or alcohol, here are four fruitcakes worth trying. You can buy them online, at select local stores and farmers markets, and in the case of Arizmendi, right at the bakery.

Stop by the Ferry Plaza Farmers Market and you can sample the fruitcake from one of the Bay Area’s most lauded growers of organic fruit. Chef Becky Courchesne bakes it in a large round, rather than the typical loaf, and she packages it in a reusable tin. Softer, less dense and more cakey than its competitors, Frog Hollow’s fruitcake whiffs of rum and brims with diced sun-dried fruits sourced from the farm, including peaches, cherries and candied orange peel that Courchesne makes in the farm kitchen.

Robert Lambert has been baking fruitcakes for twelve years, steadily expanding his repertoire which now includes four varieties. His favorite is the White Fruitcake, which mimics his grandmother's. Void of spices other than young ginger, Lambert thinks it better showcases the flavor of the fruits and nuts, an exhaustive melange of almonds, walnuts, Brazil nuts, pineapple, glacéed cherries, coconut, bergamot and Rangpu lime peels and more. Lately, his Winter Cake has been luring an increasing number of customers who appreciate the substitution of glacéed fruits for dried fruit swelled with brandy and tropical fruit juices. My favorite is the Orange Chocolate, ripped with walnut, almond and pecan shards and fragrant with blood orange and bergamot orange peels, Seville orange and orange oil.

Meet the drunk uncle of fruitcakes. And, what holiday party is complete without a drunk uncle? Prepare for a brandy assault the minute you peel off the outermost layer of plastic. One bite, and you may start slurring. Two bites, and this might be the best holiday party ever. A sheen of dark molasses creates a sticky surface and moist texture while studs of dried pineapple, papaya, cherries and almonds keep you chomping.

If Arizmendi’s fruitcake is the drunk uncle, June Taylor’s is the matriarch. What she refers to as Christmas Cake (“I am British and Christmas cake is traditionally a rich fruitcake in the style that I make it,” she says) is a testament to Taylor’s painstaking year-long process. In the fall, she dries five different varieties of grapes to make currants and raisins; in the summer, she dries stone fruits (her mashup usually includes Bing cherries, apricots and plums); and in the winter, she candies citrus peel. It’s Seville orange this year. All the fruit gets macerated in a private reserve port from St. George Spirits (based in Alameda) before baking. Taylor relies on premium ingredients from local producers like Massa Organics for their Mission Almonds, Straus for sweet butter and Soul Food Farm in Vacaville for pastured eggs. The result is a powerful but balanced cake washed in Chardonnay brandy for a hint but not a wallop of alcohol.