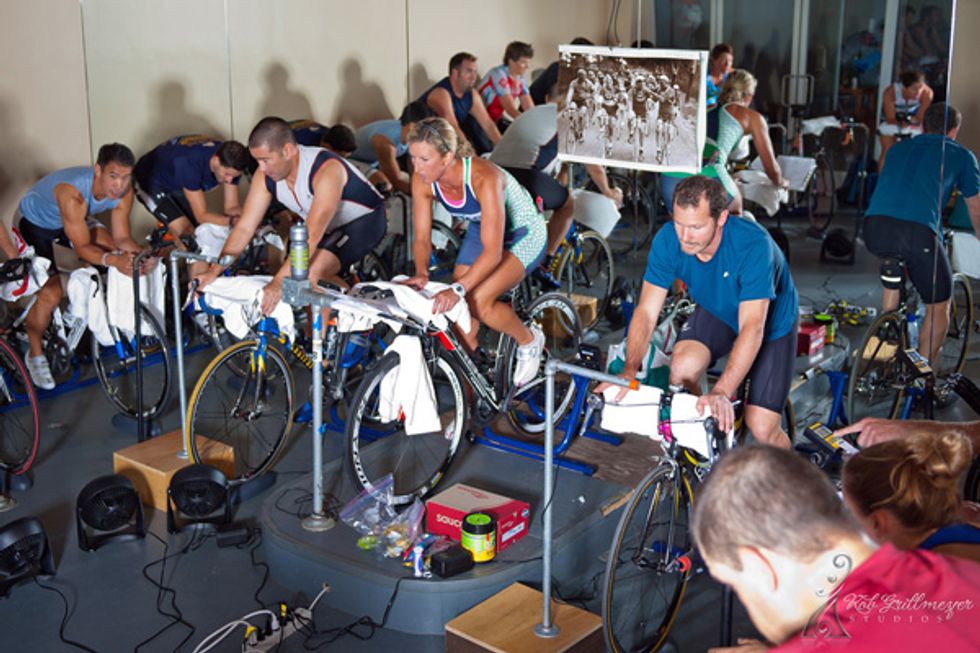 Get Your Butt Kicked by an Ironman Champion at VeloSF

“The Bay Area is one of the prime training grounds for elite athletes,” Kate Ligler explained to me when I walked through the doors of VeloSF. Kate is a professional cyclist and the General Manager of the indoor cycling-based performance center in San Francisco. “The weather and terrain make it an incredible place to develop as an athlete.”

Which is ironic, because one of the most efficient and grueling bike workouts that you can get around here is actually indoors at VeloSF, Bay Area weather and hills be damned.

The concept sounds simple enough. You bring your own bike and shoes, and the staff at VeloSF straps your back tire into a machine that turns your ride into a stationary bike. Your entire workout revolves around the wattage that you generate in pedaling, and so after a fitness test, the staff finds out what the appropriate wattage is for you. And then you ride, for about 90 minutes, varying your wattage and pedal speed based upon what your teacher calls out over loud music.

If this sounds like a spinning class to you, that’s kind of like calling a Tae Bo class the same thing as fighting Urijah Faber in a cage match.

Yes, both spinning and VeloSF feature indoor cycling with an instructor. But that’s where the similarities end. At VeloSF, the individualized training program is key. Rather than arbitrarily turn a crank to create tension on a stationary bike, you’re there on your own cycle, with a fitness difficulty that is personally catered to you and your goals. And you get re-tested every two months, to help you grow, and to make sure you’re at the right level.

The personalized program is one of they key points of VeloSF. In the words of Meredith Kessler, an Ironman champion and teacher at VeloSF, “everyone is beating to their own drums, and that is what makes these power-based classes so unique. In class I often have a pro triathlete sitting next to a 60 year-old hobbyist cyclist, sitting next to the CEO of a company who only has time for an efficient workout. And they’re all here to stay fit and gain knowledge at the same time.”

The day I visited VeloSF, I was in Meredith’s class, which was fun. And brutal. I’m used to riding out in the hills of Marin by myself, working hard but also getting lost in my thoughts. By contrast, the 90 minute class with Meredith, who won Ironman Canada in the summer of 2010, was the most efficient and demanding bike workout I’ve ever done. There was no lollygagging at red lights. There was just hard, hard work, and focus.

She blasted the music and talked us through the work-out, checking in regularly with each rider to see how they were feeling. At one point, during a three minute recovery, I realized that I had forgotten nutritional supplements. I looked up to see that Meredith had jumped off her bike and was walking around the room with an array of snacks for all the riders. With her relentlessly positive attitude (you should see how many exclamation points she uses in her emails) she’s kind of like the team mom for the class. You know, if the team mom could smile and cheer for you as she beat your ass senseless.

While the program works for any type of athlete, it’s probably most successful for a committed cyclist who is looking to progress to the next level. While I’ll keep riding by myself in Marin with my head in the clouds, I know that if I go to VeloSF more regularly, I’ll be doing that at a much, much faster pace.

VeloSF is located at 747 Front Street, near the Embarcadero. Check their website for class times and to learn more about their offerings.