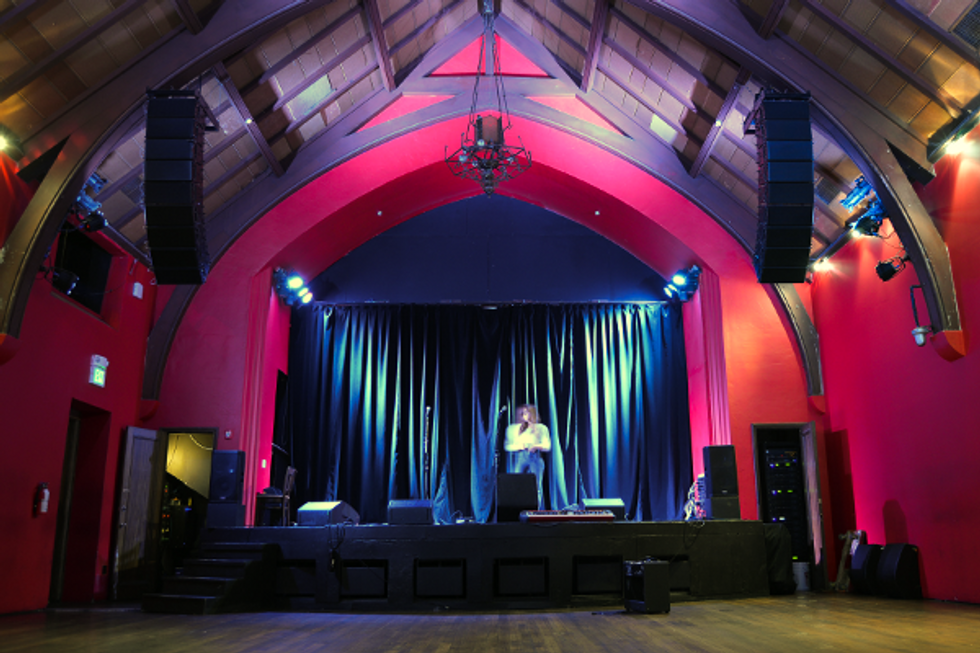 One night, as bartender Johnny Martinez walked through the Chapel, a music venue in the Mission, he heard a little girl whisper in his ear, "Iceman."

"All right. Who's there?" he called out. But the room was empty.

Martinez, whose coworkers sometimes call him Iceman, knew strange things had happened at the venue before. The Chapel and its adjoining restaurant, the Vestry, are part of the old Gantner-Maison-Domergue Funeral Home. In fact, the names of the venue, restaurant, and happy hour (the Vestry's newly-launched Sinner's Hour), are all nods to the building's morbid past.

The same night, around three in the morning, Martinez startled a member of the cleaning crew as he was closing the bar. "He jumped and said, 'Woah, you freaked me out. I thought you were that little girl that's around here.'"

Martinez had never talked to the man before, let alone mentioned the girl.

As it turns out, Martinez isn't the only one to have seen a ghostly girl creeping around The Chapel. A security camera in what was once the embalming room shows a night janitor locking the Vestry's side door around 5am. According to Camille Ives, the Chapel's Marketing and PR Manager, the cleaners were terrified when later shown the video. There had been no little girls with them and they had no explanation for who the ghostly figure was.

It's hard to tell now, but Valencia Street near Mission Street was once home to many mortuaries. Until 1949, a streetcar ran directly from Mission Street to Colma, a cemetery town where the dead outnumbers the living by over a thousand to one. Bodies could be prepared near the station, then put straight on a car to the cemetery.

The Gatner-Maison-Domerge Funeral Home in 1964. (Photo by Alan J. Canterbury)

The Gantner-Maison-Domergue Funeral Home would store bodies in the basement (where the incinerator was also located) below the embalming room, and used a body crank (that is still visible in the restaurant) to raise and lower bodies from one room to the other. Now the basement is used as a freezer space and wine cellar, where employees say bottles sometimes explode.

The Chapel's wine cellar is located where bodies were once stored and incinerated.

Employees also believe that there is a ghost of an old woman haunting the building. The chef, who sometimes arrives as early as 4am, has smelled strong rose perfume and sensed the presence of an older woman; prep cooks have had the same experience.

Martinez remembered a strange incident with a new co-worker. "I looked at her, and she just had this petrified look." She said she had heard an old woman whisper in her ear, "Camille, are you ready? Are you ready, Camille?"

Roxane Moaveni, the box office manager at the Chapel, can tick off the stories that she's heard: an older woman who disappeared from a bathroom stall, footsteps echoing through the empty building, faucets that have turned on and off, votive candles that have flown off the mantel ("I think she cried," she said of the girl who witnessed the flying candles).

Candles are lit to place on tables in the evening.

There are also tales that the green room, where artists hang out before and after performances, may be haunted. According to Ives, many artists have claimed to have strange experiences there. Martinez knows a member of the cleaning crew, whom he describes as a "tough dude," who refuses to go into the green room or mezzanine because he once saw the little girl there.

So is it haunted? Soon we may have a professional opinion. A ghost-hunting show has contacted the Chapel about filming there, and the venue has agreed.

Until then, you can download a ghost-detecting app on your smartphone (there are droves) and see for yourself over an afterworld-themed cocktail.

The room in which the ghost video took place. The body crank and security camera are visible in the upper right.