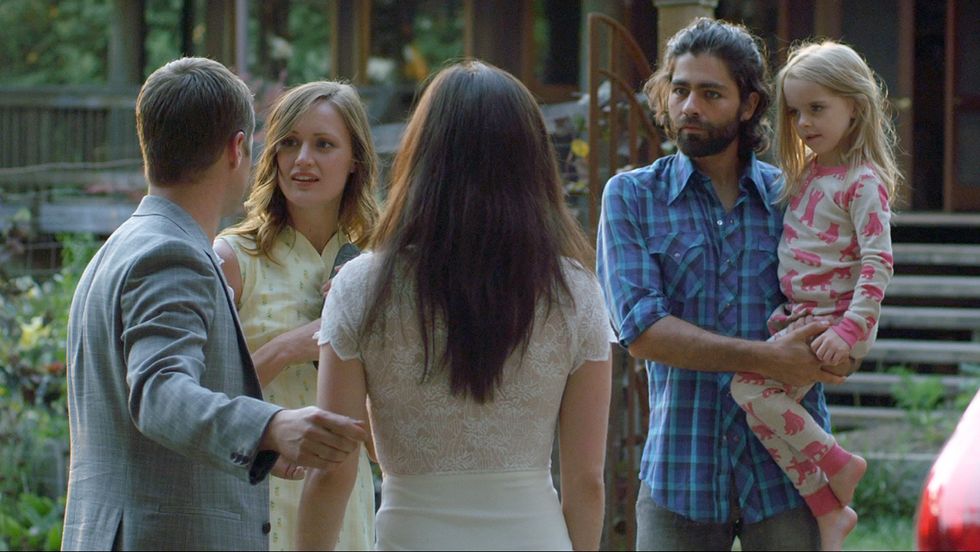 For a generation seemingly addicted to discord and isolation, the impending end of the world has become something we can all get together on, though we don’t know how it will come — solar flares, earthquakes, global warming, and even the mere existence of the year 2012 have all been put to film. In Denis Hennelly’s new movie, the EOTW boldly enters the information age, and it begins with a simple text message: “Goodbye World.”

When the mysterious message crashes millions of computers worldwide, global infrastructure collapses and the world enters a tailspin. As airports shut down and law and order flags, eight friends reunite at a hillside house in NorCal, where old relationships are tested and old flames rekindled over wine, locally grown produce, and some marijuana, until the outside world comes tumbling in.

If the scenario sounds familiar, it ought to. Director Hennelly – whose biggest previous film credit is Wu Tang Clan doc Rock the Bells – is obviously a student of Baby Boomer guilty pleasure supreme The Big Chill, and duplicates the structure of that film almost exactly, right down to the inclusion of a clone of the younger outsider character (here she’s a rebellious teacher’s girlfriend).

Moving as if to reverse time, the group of friends – composed of two hackers, a lapsed activist, tech-rich bros, a policy wonk, a wife and a student – go from yuppie to hippie instead of vice versa. In this especially it shares with Lawrence Kasdan’s original film an unbecoming neatness and a fascination with its own cleverness that will undoubtedly seem cloying a few years down the line as its predecessor did, if not now.

As it stands though, many of Goodbye World’s weaknesses are also its greatest strengths. The cinematography is lux and engaging—neither Northern California nor any of its stars have looked so good on screen—and the plot moves along at a clip steady enough to let its unconscious air of entitlement and self-satisfaction fly under the radar. In that regard it’s a microcosm: painting an accurate picture of the “haves” of today with voices and relationships of each should mostly ring true for anyone not in full denial. The fact that nearly all cast members are prominent television stars—Adrien Grenier from Entourage, Kerry Bishé of Weeds and Scrubs, Ben McKenzie of the OC, Kid Cudi of HBO’s How to Make it in America—makes for easy joke fodder, but also makes a sly nod to the notion that the voices of the current generation come from the TV. While we probably won’t agree with them as we grow, looking back at least we’ll recognize them on sight. 4-Star Theater. Rotten Tomatoes: 33%.

Crossroads 2014 – SF Cinematheque’s main event, the experimental shorts fest Crossroads consistently features some of the best and most challenging new work on film and video. Check out our in-depth look at 2012’s fest for an idea of what to expect, but be prepared for anything—the fest is always packed with artists, filmmakers, and musicians to watch. Trailer and screening info here. Thursday through Saturday only, venues around the Bay.

The Adventures of Goopy and Bagha - PFA’s well-attended series of films by the legendary Indian filmmaker and intellectual, The Brilliance of Sanjit Ray, draws to a close in mid-April, but not before Sunday’s family-friendly screening of his adaptation of this fairy tale, notable for it’s overall quality and it’s kaleidoscopic, entrancing musical sequences. PFA Berkeley.

Food & Farm Film Festival - The second year of this homegrown festival, which brings audiences a series of exciting food freebies and film pairings from locals like Bi Rite and Dandelion Chocolate, is marked by some great film offerings from other past tests, including Markus Imhoff’s immersive doc More Than Honey (Berlin & Beyond) and the gorgeously pastoral Le Quattro Volte (SFIFF). Thursday through Saturday only, Roxie.

Nymphomaniac Volume II - Audiences didn’t have to wait long for the conclusion of Lars von Trier’s kinky diptych. The second makes good on the promise of the first, finding von Trier taking himself even more seriously and in thus creating a product with even more questions, even more insanity—an artifact of compulsively watchable pop/art/cinema. Not for the faint of heart, but you already knew that. Embarcadero Center Cinemas. Rotten Tomatoes: 69%.

The Missing Picture - Rithy Panh’s Oscar-nominated doc (and CAAMFest standout) presses hundreds of small clay miniatures into service, ostensibly to explain one picture taken by the Khmer Rouge in the late 70s. Ultimately, they reveal the monstrous truth of that era and the abuses and excesses of Pol Pot and the KR with a clarity and humanism that the historical record has so far denied. Embarcadero Center Cinemas. Rotten Tomatoes: 98%.

The Unknown Known- Renowned documentarian Errol Morris (The Thin Blue Line) turns his patented Interrortron to one of our most notorious figures of contemporary war politics, Donald Rumsfeld. The smiling cypher placed before us will surely rankle some and frustrate others, but there’s undeniable drama to this inquisition, even if a breakthrough never comes. Opera Plaza. Rotten Tomatoes: 77%.