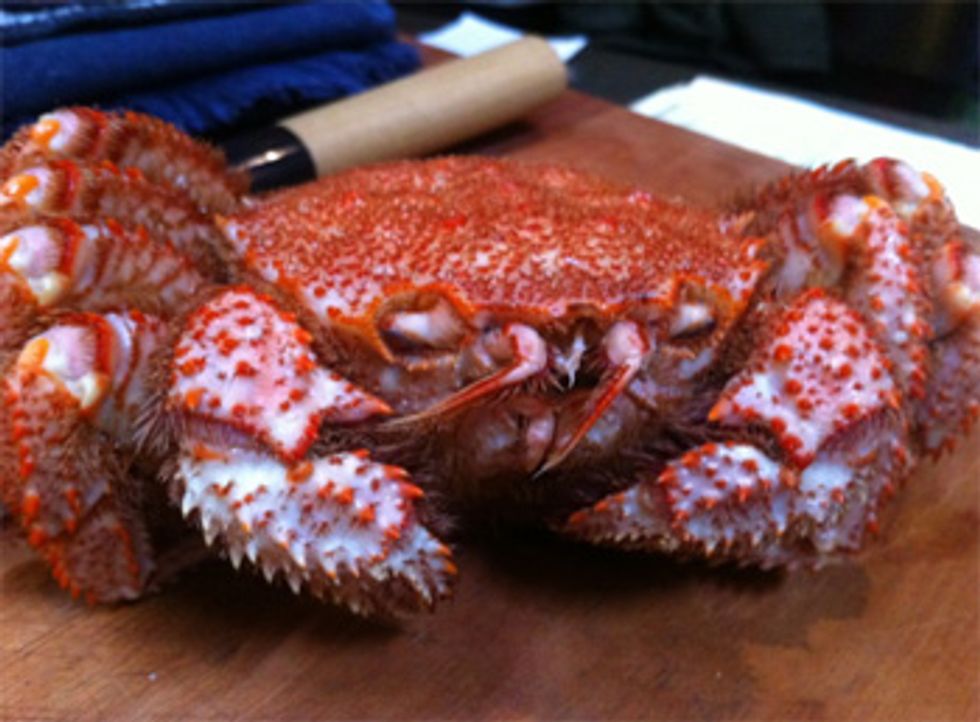 Hairy Crab at Sebo Tonight, Get Them While They're Cold

I talked to Michael Black, owner of acclaimed sushi restaurant Sebo in Hayes Valley about what’s in store for his customers tonight, not to mention the trials and tribulations of running a sustainably-driven sushi restaurant.

Hairy crab?
They’re called Kegani. I just got two in for tonight. They come in about 1–2 pounds in size and are really prized in Japan for their sweet meat. They come from Hokkaido, an island in the Northwest of Japan.

How will you be preparing them?
They’ll be on the sushi menu and a couple of salads.

Do you ever serve them raw?
No, but one of my favorite dishes is kimchee-pickled raw crab.

What other exciting things are you working with tonight?
I have hook-and-line monkfish liver. It’s taken me forever to find it again, so it hasn't been on the menu for two years. Unlike the traditional way preparation, which involves chopping it up and reforming it into a cylinder and steaming it with sake, I make a poaching liquid. I feel like you lose less fat that way. It’s silkier.

How do you know it’s hook and line?
You have to trace it back to where it came from. Figuring that out can take months or weeks. You have to trust your sales rep and I used to have one that would go find individual fishing boats for me.

I’m seeing a Portlandia chicken scene here. But with monkfish. Hold on, while I fly to Japan to meet the fisherman.
You know, I used to have Wagyu beef on the menu and it would actually come a certificate of the cow, including a picture of it, it's name, it’s diet, who its parents were. You even get a nose print.

You need a tail print of this monkfish clearly.Anything else exciting tonight?
Well, last week we had a trial shipment of sustainably produce Blue Fin tuna from a company called Ten Qoo Maguro. They raise these tuna in a low population density, closer to what it would be like in the wild.

How much do you have to shell out for this?
Well, the toro is $14 for one piece of nigiri. But last time I ordered 20 pounds of the Blue Fin tuna and we sold out in 2 days.