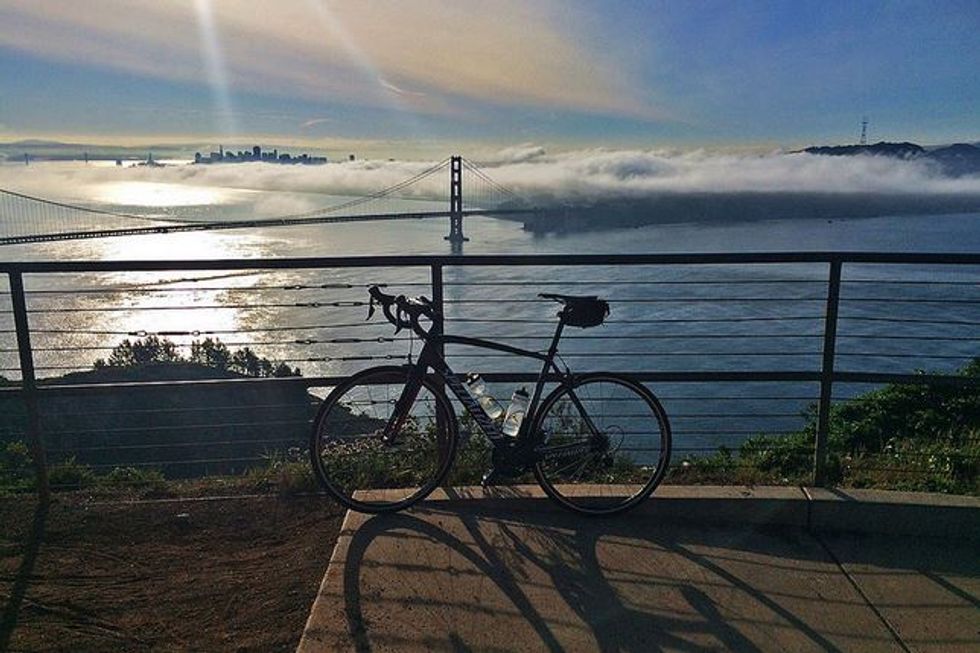 A visit to one of the Bay Area’s most scenic vistas is not soon forgotten – getting to it on a bike for the first time is even more memorable. Today we’ll tackle a top tourist attraction that is also a challenge for cyclists of all abilities. A ride up to Hawk Hill is a great bucket list climb – one that elite San Francisco cyclists often incorporate into their weekly training regimes.

How to Get There
In order to do the climb in its entirety, we suggest a start point that allows at least some warm up time – with that in mind we’ve picked a spot that affords easy parking if you’ve driven from north or south on Highway 101. Take Alexander Avenue, exit just north of the Golden Gate Bridge. Proceed about .6 mile towards Sausalito and make a right turn onto East Road, and then park.

Alternatively, you can ride your bike from San Francisco across the Golden Gate, but this can be frustrating during the peak of tourist season as the east side walkway can be crowded and the west side walkway is only open to cyclists weekday afternoons and weekends and it can also be swarmed with tourists on rental bikes.

The Ride
At 20 miles and with 2,000 feet of climbing meander this jaunt through the former army bases that make up this part of the GGNRA is as scenic as it is enjoyable (or it can be as tough as you want it to be).

We’ll cruise south along East Road on the bluffs overlooking the bay then descend to the old parade grounds and make a right (1.1 miles) to go around them passing by Covallo Point Hotel.  Keeping bearing left, then at the stop sign in front of the Coast Guard Station go right, past the harbor till you reach a point just under the Golden Gate Bridge. The views are spectacular, both toward San Francisco and up at the bridge.

The climb is in three sections, the initial doglegs under the bridge take you to a parking lot, from there bear left up a steep pitch until you reach the stop sign (2.8 miles).

Turn left on Conzelman Road and continue up past the fortifications overlooking the bridge turning west as a view of the Golden Gate opens up before you.

At the roundabout (3.6 miles) bear left and continue up. Once you’ve reached the summit take a breather and take a look around – the tunnels you see are part of two 16-inch gun emplacements placed here in WWII to toss 2,200-pound battleship shells 25 miles out into the Pacific should the Japanese Fleet ever appear. We’ll ride past the second further on this ride.


Next we’ll make on one of the more scintillating descents one can experience, literally hurtling down, no pedaling necessary. This breathtaking downhill is both scary and sublimely beautiful. On your first attempt decide whether to take in the view slowly or ignore it and ride fast, doing both is not recommended.  Fortunately the road is one way all the way down. For a preview, just search for “Hawk Hill Descent” on YouTube.

As the road levels off you’ll pass more decaying fortifications as you wind down toward Point Bonita. Rounding a bend you’ll see buildings on your right (6 miles). Continue straight and loop around Battery Wallace to the right as you come onto to Field Road. (6 miles)

Now you’ll ride past the restored Nike Missile launching pad and then descend past the GGNRA visitor’s center (7.2 miles).

At the next intersection, make a left onto Bunker Road and ride around the north side of Rodeo Lagoon. As the road rises bear right on Bunker at the intersection (7.8 miles) and continue past the entrance to the Marine Mammal Center. Go through the gate (8 miles) and onto the Coastal Trail. A few points on the former road are now dirt, but are easily ridden. More fabulous views unfold.

At 9 miles you’ll reach the 16-foot gun barrel on display at the back of the Battery Townsley fortification and then begin a descent down to the lagoon. We profiled the reverse route to the Battery in a hike on 7x7.com in September of 2013.

At the parking lot (9.6 miles) you’ll find restrooms and drinking water, a lovely view of the beach and if the surf is good a lot of hopefuls waiting for a wave.

Head out Mitchell Rd. alongside the lagoon, then rejoin Bunker Rd. as it climbs gently up the valley. At the former base housing area, turn right onto McCullough Rd. (11.9 miles) for another challenging climb.

Upon reaching the roundabout bear left and head back down Conzelman, enjoying the city and bridge views while taking care to avoid tourist traffic. At the base carefully turn left onto Alexander Ave, and go under Hwy. 101 and then turn left after the road cut onto Danes Drive; just before the tunnel make a hard right onto Bunker for a lovely, gently curving, descent down to the parade grounds. Either head back to your car or rinse and repeat for another go round.