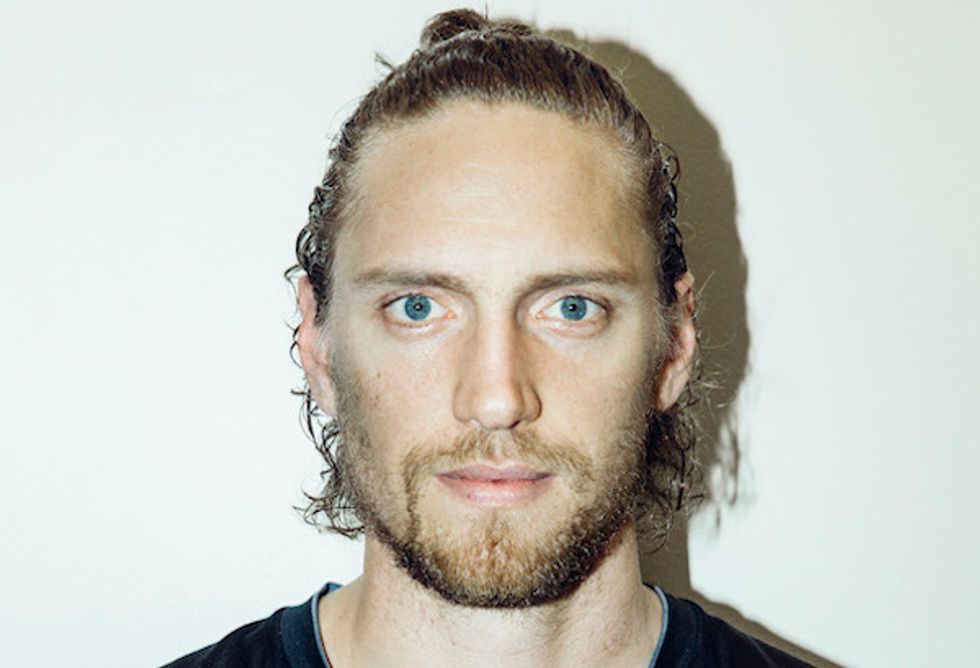 He Might Be Giant: A Day in the Life of Hunter Pence

When I was assigned to interview noted hitter Hunter Pence, in person for an entire day, I was thrown off guard. First, I like the guy. A lot. And second, unlike so many a glorified chef or socialite, he's an actual celebrity in San Francisco—not only famous, he's a hero. I had my fears.

Would he be standoffish? (Surely someone at Pence's level needs to be somewhat guarded.) Would he make me go through several levels of shady public relations? (Alas, this town is overrun by PR monsters.) Or would he be mean? (Oh, the stories one could tell of pissy chefs.) How would he react to an interview from a self-absorbed reporter who isn't a sports journalist and lacks the acumen of stats and numbers? After all, Pence, in part, helped guide us to World Series victories in 2012 and 2014. Unfairly placed on a pedestal by me, the champion rightfielder had his work cut out for him.

A Texas native, Pence, 31, was traded to the San Francisco Giants in July 2012 as part of a deadline deal with the Phillies. Just three months later, Pence helped us clinch our second World Series. This, as legend goes, was due in large part to his prowess in the batter's box (his askew stance, billed by FourTwoNine editor Kevin Sessums as "the best sight in all of San Francisco"), but also to his rousing speech given in Game 3 of the NLDS against the Cincinnati Reds. For many fans, Pence's impassioned sermon, given to his troops as the team faced elimination, rivals Queen Elizabeth's speech to the troops at Tilbury. Only his was more important.

On a warm winter Wednesday, I walked down Third Street to AT&T Park, dressed in what I assumed would be ideal for meeting one's baseball idol—an indigo henley, black waxed demin jeans, white Air Max, and a casual Rag & Bone tote. See, I was frantic over getting to meet the man who is, arguably, one of the greatest players on what is, inarguably, the greatest baseball team in the MLB. I wanted to look right. (I told you I am self-absorbed.)

While waiting outside the stadium at King and Third, I receive a text. A friendly one. It's from him.

He escorts me through the gates and inside the ballpark where so very few get to go. I arrive inside the Giants workout room, and I am in awe—it is the extreme opposite of the YMCA workout room where I personally am forced to suffer while sweating. Currently, most of the equipment is gone, having been shipped to Phoenix for spring training. But I'm getting ahead of myself.

First impressions of Pence: He's very tall. Extremely built. And his hair is, shockingly, even bigger than mine, hence his frequent use of the selfie hashtag #afropuff. But unlike the imposing figure we routinely see on TV and at the ballpark, he's approachable and quick to put others at ease. With a native Texan's manners, Pence offers me seats and some water, and then prepares for a workout unlike any I've ever seen.

"His warm-ups alone would make most guys throw up," says Pence's batting coach, Chad Chop, a former hitter for the Montreal Expos. (Pence met Chop at a gym in Orange County and, after a short conversation, offered him the job on the spot.) Pence's workout involves weights, crunches, huffing, puffing, sweating, lots of sweating, sprints around the field, and some foreign exercise that involves strapping a suit of weights to his chest. This makes my 20 to 25 minutes on a janky elliptical seem downright impotent.

The only similarity I notice in our routines is that, much to my delight, we both have Lana Del Rey on our workout playlists. Pence tells me that he used to exercise to blistering rock, but mixed things up when he found most of the lyrics to be too negative. "I'm now conscious about focusing on what goes into my mind while I'm working out. That's just as important."

As rigorous as his exercise regimen is, Pence's focus on positivity. Not in some sort of hippie-crystal-moonbeam way but rather as a conscious way of refocusing his thoughts on betterment. Like, say, winning the World Series in 2015. "In the end, everything is love," he tells me. "And each day, I repeat to myself, 'We're going to win, we're going to win.' Because you have to believe it, with every fiber in your being." Pence even coaches the Giants' personal chef: when you cook for the team, he says, you should "cook for winners."

But this mindset isn't just limited to the goal of winning trophies once a year. He tries to maintain his hopeful outlook at all times, whether that be cheering on his fellow teammates or treating fans with respect. "I usually oblige people when they want a pic," Pence says. "I don't want to be that jerk player that shuns his fans, you know?"

During the three-hour workout, Hunter and I discuss a myriad of things. From Pablo Sandoval's departure ("He's a great guy, and deserves to be wherever he wants right now," says Pence); his girlfriend, gamer Alexis Cozombolidis (the hosts of Twitch show Lets Get Lexi, whom he met at IGN); the negativity of life's petty dramas; and team rivalries ("When we play against LA, it's an entirely different vibe at the park. You can feel it in the air. I love it").

Eventually, in between sets, our talk turns into kind of a therapy session, with me as the patient and Pence as the doctor. Bordering on a lack of professionalism on my end, I open up to him about my own life and the merde I was wading in that day. He gently asks me if, by chance, I tend to have too much drama in my life. Bingo. He nailed it. But Pence has a way of drawing things out of you in order to get to know you. Seriously, this guy seems capable of anything. But that, as Chop explains, is just how Pence is. "He's always thinking of others. He's selfless."

This kind of instinctual kindness was evident when, on the field and far from any cameras, Pence interrupted his own workout to help some workers carry a rug onto the field (it would later be used for the SF General Hospital's Hearts After Dark gala fundraiser). "I can't believe Hunter came over to help us!" we overheard someone squeal.

It's no wonder his team honors him with the moniker "The Reverend."

Later, after Pence finishes working out, he graciously toots around on his customized motor scooter (emblazoned with the Giants logo and "Kaballin," a tip of the hat to Mortal Kombat) for our photo op. (Noted for riding his scooter to and from games, it was stolen and returned during a Cubs game back in 2014.)

We head to his condo in SoMa to snap a few shots and talk life after baseball. The first thing we notice at his place is how immaculate it is—an oasis of minimalism. Marble kitchen, floor to ceiling windows, and the coolest foosball table I've ever seen. With a distinct lack of bric-a-brac, he does keep a photo of his teammates on a table, an Uno deck, piles of video games next to his 3D flat screen, and a fridge precisely stocked with yerba mate and green teas.

His diet, by the way, is strictly paleo during training and baseball season. When asked to name his favorite junk food in moments of weakness, he thinks about it. "I guess pizza or burgers. I don't eat a lot of junk food. And, honestly, I'm not the biggest food guy. I know San Francisco is a food town, but for me, I eat for sustenance mainly."

And with that, I'm knocked over the head: In a city rife with kowtowing gastronomes, Hunter is the most authentically down to earth guy I've met in years. Never mind that he happens to have two World Series rings (which, by the way, he doesn't wear).

When you hang out with Hunter Pence, there is a lot of talk about enlightenment and ways to cope with life's daily struggles. He shows me the books he reads, a library full of well worn favorites, some of them heavily underlined and annotated. We're talking Miguel Ruiz's The Five Levels of Attachment and works by Mahatma Gandhi. But he's not all literati. Pence's big passion off the field is gaming.

The dude doesn't just enjoy video games—he made a spectator sport of it: You can watch him play live, sometimes with his own teammates, on Lets Get Lexi or his own livestream. But he also has deep admiration for those in the industry, saying that soon "gaming is going to be bigger than sports....There are gamers making far more money than some of the biggest sports stars right now."

To show me his prowess, I ask him to play a game with me. We sit down and turn on Super Smash Bros. I am, predictably, terrible. He is, of course, excellent. Sonic the Hedgehog this is not.

After revealing my dearth of both hand-eye coordination and gaming skills to a noted World Series champion, I follow Hunter to the Embarcadero for dinner. Sporting a baseball cap during rush hour, few people recognize him right away, but those who do are elated. They get to go home and say they saw Pence.

We sit down at MarketBar's patio for a light dinner—a smattering of appetizers and some sparkling water—and watch people race home from work or out to happy hour. He says he's more than hopeful about the 2015 season—he's almost sure of it. And good thing: Since we first met in January, Pence suffered a fracture to his left forearm during a spring training game in March, effectively taking him out of the game for two months. The Giants have been through worse (much worse), and our friend Hunter will be back before we can say Beat LA!

As the check for dinner hits the table, I at last ask him that inevitable question: "So, like, what's your favorite place in SF?"

"Right here," says Pence. "For me, this spot on the Embarcadero is pretty much heaven on earth."