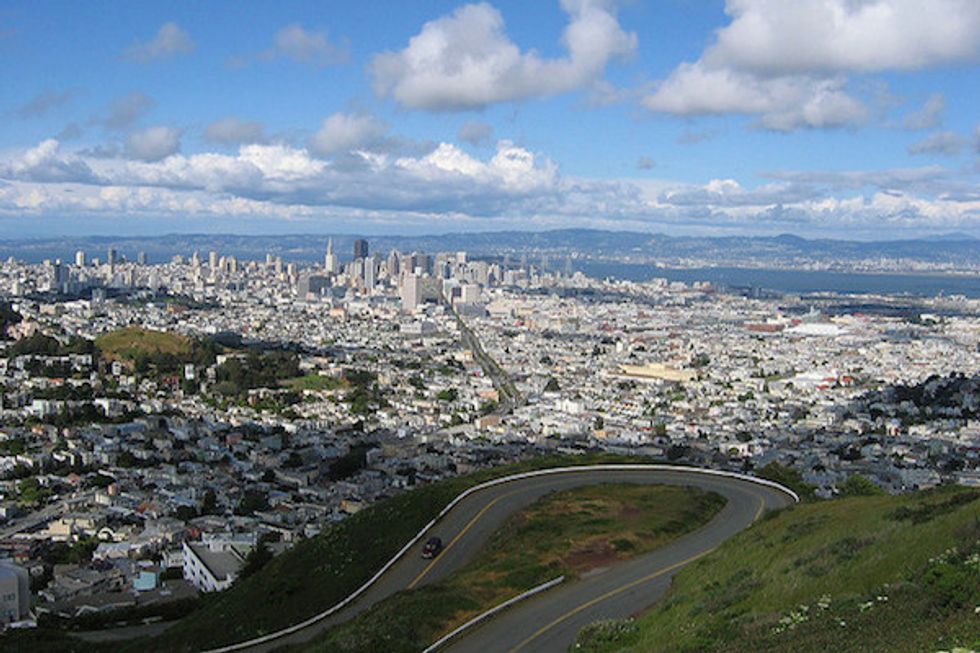 Head for the Hills: What to Do on SF's 7 Original Hills

Of the 48 named hills in San Francisco, only seven claim to have been named at the time of the city’s founding—Nob Hill, Russian Hill, Telegraph Hill, Rincon Hill, Twin Peaks, Mount Sutro, and Mount Davidson. These once wild hills may have been tamed by an expanding metropolis, but the hills’ adventurous spirit remain as unique as the neighborhoods they inspired.

This posh neighborhood atop Union Square is famous for luxurious mansions, hotels, and private clubs. Fortunately for the rest of us, you don’t have to live in Nob Hill to find a good time.

Recoup the cost of a cable car ticket by riding up Powell to the free (and kid-friendly) Cable Car Museum at Washington and Mason. Housed inside the city’s last cable car barn and powerhouse, history comes alive among the giant wheels and engines that still pull cable cars up our signature hills.

Overlooking Huntington Park, Grace Cathedral is an arts and cultural pilgrimage for the religious and non-religious alike, with grand bronze doors (a replica of Ghiberti's Gates of Paradise in Florence), gothic arched ceilings, De Rosen mosaics, an Interfaith AIDS Memorial Chapel featuring an altarpiece by Keith Haring, murals, frescos, three organs and 1100 figures rendered in stained glass. The church’s rich calendar of events include hatha yoga every Tuesday over one of the church’s two labyrinths.

Once home to a small cemetery for Russian sailors and trappers, Russian Hill now welcomes a new generation of explorers to the charming shops of Hyde and Polk streets, grand historical residences, and one-of-a-kind walks.
Whether you’re walking among the blooming hydrangeas and winding red brick of Lombard Street or strolling the tiny cobblestone path of Macondray Lane, every step is framed by beautiful foliage and period homes. (Readers of Armistead Maupin’s Tales of the City may recognize Macondray Lane by its fictional name, Barbary Lane.)

The San Francisco Art Institute is a Russian Hill must see, featuring a 1931 Diego Rivera mural, student exhibits, lectures, and a free, unobscured rooftop terrace overlooking the Paris of the West.

For a more intimate view of San Francisco, Ina Coolbrith Park is a hidden treasure of tree-lined staircases and patches of grass, named after California’s first poet laureate, that surprises it’s visitors with a mix of seclusion and stunning views of the bay.

Telegraph Hill was named for the wooden-armed semaphore that signaled the type of vessel entering the bay and is now a beacon for travelers from around the world.

Whether you decide to walk up the lush hillside of the Filbert Steps or the tree-covered gardens of the Greenwich Steps, all paths lead up to Pioneer Park, capped by the 210-foot tall Coit Memorial Tower, in honor of the city’s heroic firefighters. In addition to the sweeping views, the tower is also known for its 27 depression-era murals packed into two floors, viewable through docent tours.
While on the hill, listen for the squawks of the parrots of Telegraph Hill and relish in the jubilance of this merry red and green collective. For a window free (and tourist free) view of the city, walk down Montgomery Street to the dead-end at Calhoun Terrace for a quiet vista overlooking downtown and the bay.

Since the Gold Rush, Rincon Hill, comprising the east end of SoMa, has transformed from upper-class residential area, to industrial district, and back again, while the hill itself has since disappeared under high-rises, a reflection of the city’s future plans for the district.

If you live or work downtown, Rincon Hill is full of Privately Owned Public Open Spaces (POPOS) to explore. On weekdays, grab a handcrafted sandwich from The Sentinel and hang out inside the 101 Second Street Atrium, a space that’s part greenhouse, part art gallery, featuring a two-story bronze statue and free Wi-Fi from a nearby coffee shop.

If you want a glimpse into the future of Rincon Hill, the outdoor terrace at the 100 1st Street POPOS overlooks the massive construction site of the new Transbay Terminal.

Once you’ve had your fill of skyscrapers, cut over to the Embarcadero Pedestrian Promenade and bike, skate, walk or jog along the beautifully developed shoreline under the bay bridge to the Ferry Building, full of countless culinary pleasures as fresh as their weekly farmer’s market.

Soaring 922 feet at the city’s center, the northernly Eureka peak and its twin, Noe Peak, offer a potential vista (depending on Karl the Fog on any given day) from the ocean to Oakland. With free parking, restrooms, and roads forming a figure-eight between summits, traversing Twin Peaks by car is the easiest way to take in the best view in the bay area.  Yet, if you savor the journey as much as the destination, grab a pre-hike lunch (and drinks) in the famous Castro District, then head down 19th, grab some cardboard from the pile, and enjoy a free ride down the Seward Street Slides.
Once 19th ends at Market, double back on Clayton to reach the Pemberton Place Steps, a three block long stairway through heavenly cottages and privately-owned flower gardens. Crown Terrace will back track to Tank Hill, a quiet place to grab a bench (or a seat on it’s rocky ledge) to simultaneously catch your breath and have it taken away with views that stretch from Cole Valley to the Presidio.

Bring a jacket to the peaks (and some bug spray if you’re planning a trip at dusk) and keep your eyes peeled for the endangered Mission Blue Butterfly among the wildlife and flora that thrive around this epic lookout.

In 1886, future mayor Adolph Sutro began planting trees on a grassy hilltop called Mount Parnassus in celebration of Arbor Day. The hilltop, since renamed in his honor, is now apart of UCSF’s 61-acre public reserve, home to a thick forest of eucalyptus, cypress, and pine. Visitors are welcome to walk the unmarked trails that crisscross the wooded reserve, but unlike most other hills in the city, there are no picturesque views waiting for you at the peak.

Hikers on the East Ridge Trail pass a small building that represents the remains of Nike Missile Site SF-89C, while a walk down Fairy Gates Trail will pass the forested entrance to the mysterious Ishi’s Cave, named after the last member of the indigenous Yahi, who, after emerging after a lifetime in the wildness in 1911, spent his final years as a research assistant among the anthropologists at UC San Francisco.

When visiting Mount Sutro, dress for the weather—often foggy or rainy—and keep a close watch for birds, wildlife, and poison oak. And when you’re done hiking, walk down Parnassus Avenue to Cole Valley for a warm meal at Zazie or a cool bite at The Ice Cream Bar, a '30s style soda fountain.

Originally named Blue Mountain, for its 75 species of wild flowers, Mount Davidson’s 938 feet makes it the tallest geographic point in San Francisco. Like with Mount Parnassus, Adolph Sutro encouraged schoolchildren to plant what is now 30 acres of mostly eucalyptus trees, which attracts wildlife and hikers alike to relish the park’s fog covered trails and expansive panoramas.

Unlike Twin Peaks, you must hike to the summit, through a backcountry of native grasslands and coastal scrub that includes blackberries during summer months. Take the 36 bus to the park entrance at Dalewood and Myra and follow the dirt trail to the peak.

At its peak, the Mount Davidson Cross may be the park’s most striking feature. The 103ft high monument was the last of several Depression-era attempts to build a memorial honor the California’s pioneers. At the end of a long legal battle over it’s conflicted role as a religious symbol and an historic landmark, the memorial was sold and rededicated to the memory of the 1.5 million victims of the Armenian Genocide.

Continue on to Mount Davidson Vista Point to enjoy expansive views of the city. If you forgot to pack for a picnic in the park, hike back the way you came and over to the cozy West Portal neighborhood where Mexican flavors and colorful decor await at El Toreador.

With eight tasting rooms and a pool, Vista Collina Resort is the ultimate Napa staycation