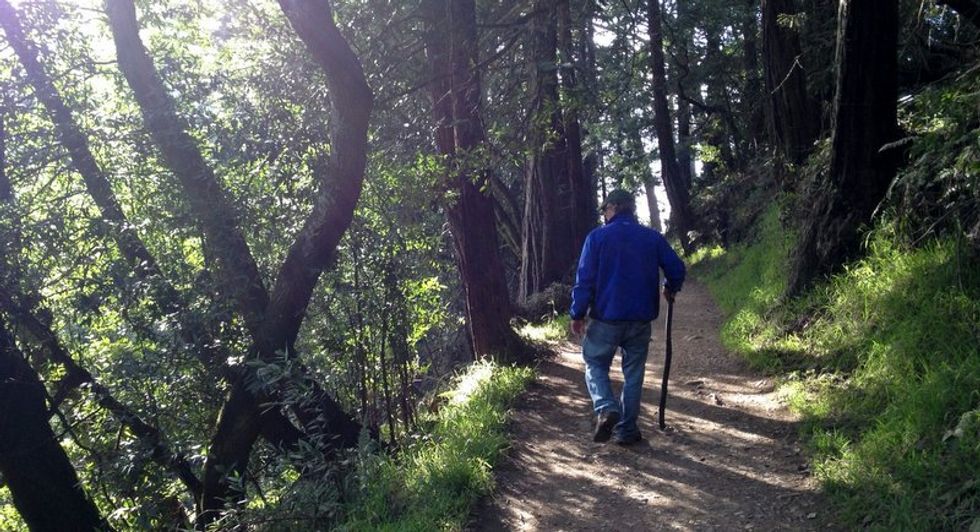 Hike Among Redwoods in the Oakland Hills

Draped over 500 acres in the Oakland Hills, with expansive views of San Francisco and the Bay, Joaquin Miller Park is a delightful place to hike among towering redwoods. Operated by the city of Oakland it’s named after its former owner, noted local writer and poet Joaquin Miller.

How to Get There
From San Francisco, the North and East Bay take Hwy. 24 the south on Hwy. 13 (the Warren Freeway) to Joaquin Miller Rd/Lincoln Ave exit. From the South Bay Hwy. 580 west to Hwy. 13 north. The park is served by AC Transit route 39. You can also enter the park from Skyline Blvd. at the Sequoia Arena.

The Hike
As we were looking for more solitude than the main entrance offers we opted to park on Skyline Blvd. The aptly named Big Trees Trail parallels the road, so it’s easy to step onto wherever you park. Head south and it soon loops into the Sequoia Bayview trail. After about two miles you’ll intersect back with the Big Trees trail. Take this to return to your car or continue to your left for another mile and a half, looping around the Sequoia horse arena.


What You’ll See
Some of the oldest redwood trees in the Bay Area, dating back to the 1880’s (most of the bay’s redwood forests were clear cut in the 1850’s to provide building material to the rapid growth of San Francisco during the Gold rush). Be on the lookout for some amazing displays of fungus, particularly the Turkey Tail variety. You can also glimpse some great views of SF and the Bay from a few spots. This also makes for a great rainy day hike. Leashed dogs are welcomed, as are mountain bikes and horses.

Other Things to Do Nearby
The Chabot Space and Science Center is located just up Skyline Blvd. with a cafe called Bean Sprouts. Joaquin Miller Park also abuts the Redwood Regional Park for further hike extensions.