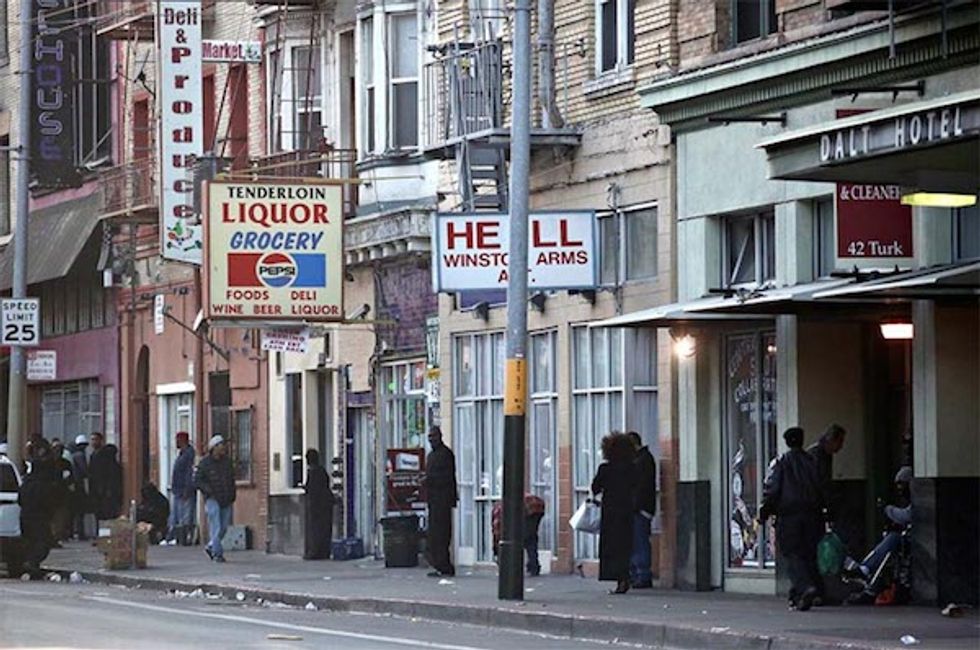 HIV in the Tenderloin

According to the San Francisco AIDS Foundation, the Tenderloin is one of the top four neighborhoods in the city with the highest numbers of people living with HIV/AIDS, and in the top three for HIV-positive intravenous drug users. An interactive map of San Francisco on AIDSVu.org shows that in 2010, the zip code 94102 had a rate of 4,945 adults and adolescents who were known to have HIV or AIDS per 100,000 population—nearly 5 percent of residents.
Mary Magee, sixty-one, is a nurse that started working with people who had HIV or AIDS right after she graduated from college, and has been in the Tenderloin for about twenty-five years. “I found people with AIDS to be very genuine,” she told 429Magazine. “I was very uncomfortable with homophobia and wanted to fight for the underdog.”

Magee is also HIV-positive herself, having contracted the virus while working when she was twenty-five. She explains, “I was working with a man with end-stage AIDS…when I stuck myself with a needle.” Magee adds that it was the “end of a long shift” and that she was “probably tired.” After being diagnosed, she saw a limited future for herself. “I didn’t expect to live past five years, so my thirtieth birthday was a big deal,” she admits. “I’ve been very lucky. I consider myself extremely fortunate.”

Magee has long remained relatively healthy despite the virus, though she currently has to take three medications twice a day to maintain her health. Detailing some of the medical effects HIV has had on her, she says, “I have some neuropathy in my feet. They think it’s from the nerves being exposed to the virus,” a feeling she describes as like “standing on pins and needles.” She continues, “I developed lipodystrophy—it’s a funny thing…[that] results in less fat in some areas and more in others, so I lost my body type…How lucky am I? My big thing is body image,” she laughs.

The virus has not just impacted her medically. She acknowledges that she “felt a lot of loss [about] not being able to have children.” She knows that it is safer now for HIV-positive women to become mothers, but it when she was of childbearing age it was not possible for her. She grieved about never having children, but when she was thirty-six, she married a man with two grown children who were seventeen and twenty at the time. Her pain around not having kids has been eased by her stepchildren and becoming a grandmother. She speaks lovingly of her eight-year-old grandson, Micah, who enjoys having theological discussions with her.

There are a number of issues in the Tenderloin that worsen the problem of HIV and AIDS there. A health counselor for the Shanti L.I.F.E. (Learning Immune Function Enhancement) Program, Jackson Bowman, told 429Magazine, “I think the Tenderloin specifically creates a critical mass of health-risking situations—[unstable] housing, paired with food scarcity, paired with [little] income” along with “racism, sexism…mental health [issues], drug use and homelessness play a big part in HIV.”

One of the main problems is lack of self-care. Thaddeus Ballantine, who is HIV-positive, used to be homeless and now lives in a building that is funded by the health department, where he witnesses the consequences firsthand: though not all are from HIV/AIDS, “there’s a death a week. I don’t know if its psychological or socioeconomic, but some people just aren’t taking care of themselves,” he says.

The community liaison for the UCSF Alliance Health Project, D.K. Haas, told 429Magazine that there are “a lot of socioeconomic factors.” She continues, “If people don’t have food, housing, basic needs met,” then they are less likely to take care of their health. She adds that substance abuse and low self-esteem also contribute to the problem.

Magee feels similarly. “I think that between poverty, living on the street, mental illness, it’s hard for people” to get medical care “or stay on their meds,” she says. “People’s lives are so chaotic. I think not being able to prioritize your health because of other stuff is [a problem] in the Tenderloin.”

She also admits that it was difficult, at first, for her to tell people her HIV status. “I didn’t tell [many] people for a long time. I was selective about who I told.” This was partly because “I worked in labor and delivery for sixteen years and people are really sensitive around newborns,” she adds. Magee continues, “I really didn’t want people to know I was working on the AIDS unit, to reinforce the fear people felt.”

HIV and AIDS are now much better understood than they used to be, but people who are HIV-positive still often hesitate to disclose their status. Ballantine, who also works as a volunteer for the HIV Story Project, noted that now there is “somewhat less [stigma], but some people are still ignorant” of how it is transmitted—while listening to a show on KQED, a local public radio station, he once heard a caller say they thought HIV could be acquired from mosquitoes. (The doctor on the show responded, “Well, unless you’re having sex with it…”)

Magee also said that she has a friend who does HIV testing. “It’s striking to her that even with all the progress that’s been made,” many still do not understand: “If she tells someone they are HIV-positive, they think ‘I’m going to die and no one will love me.’”

Regarding the negative attitudes that often surround HIV and AIDS, she says, “I’ve been a nurse for a long time. My friends are progressive. For me, there’s no reason to feel stigma, [but] I still do. I can’t even imagine” what it’s like for other people, she says.“I think we have a ways to go as far as stigma. There’s definitely stigma in the Tenderloin about being HIV-positive.”

She does think that strides have been made, though. “I think that there’s been enough education that just being HIV-positive isn’t freaking people out.”