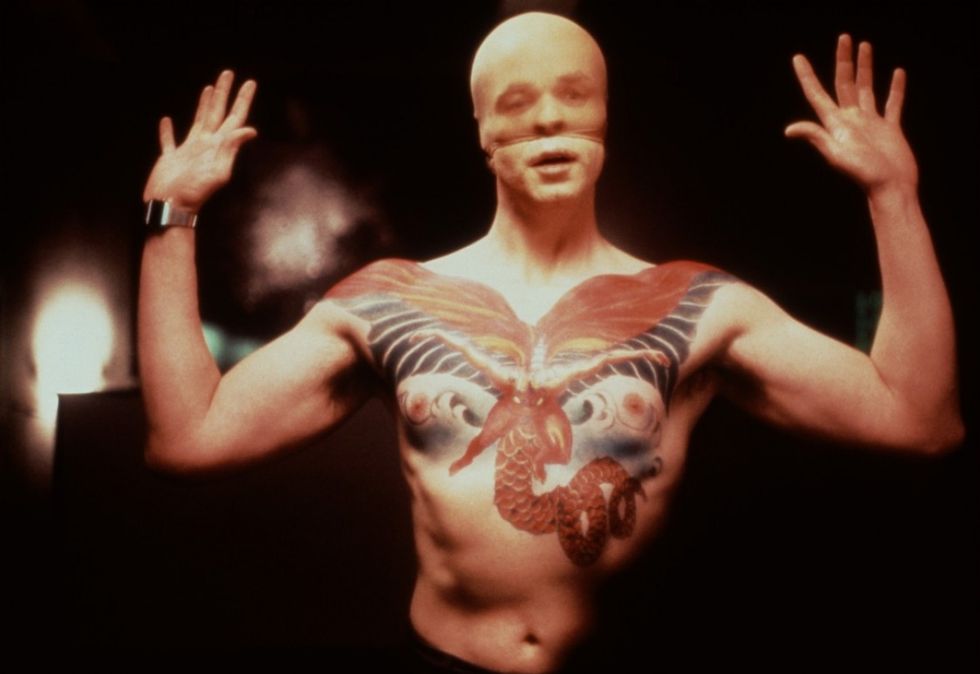 It's baaack! For the second straight year, in the spirit of the season, the weekly compilation of first-run indie offerings has been replaced with seven movies guaranteed to titillate, nauseate and leave you maddeningly unsettled. Once again, rather than rounding up the usual suspects – cyberspace is already littered with zealous endorsements of The Exorcist and Rosemary's Baby – I've made a conscientious effort to name less obvious shockers, all available at your local video store (if it still exists) or via the now-maligned Netflix.

1. Manhunter
Notable to some only for the first appearance of Hannibal Lecter on the big screen, Michael Mann’s superior thriller was eventually remade as Red Dragon, with Lecter’s role transparently beefed up to give Anthony Hopkins more scenery to chew, and to maximize commercial interest. Yet a more liberal helping of Hannibal the Cannibal is hardly necessary to make Manhunter the most gripping, disquieting adaptation of a Thomas Harris novel to date (and that includes The Silence of the Lambs). Starring a pre-CSI William Petersen as an investigator obsessively tracking a murderous megalomaniac, the movie builds, ever hypnotically, to an explosive climax not easily forgotten. Recently given its own long-overdue Blu-ray release – albeit without any extras to speak of – it is sublimely riveting entertainment, even with the nefarious doctor (then named “Lecktor,” and played by Brian Cox) relegated to the background.

2. Cronos
Guillermo del Toro's terrifying 1992 debut, about a seemingly Cronenbergian device that grants its owner immortality but also an insatiable thirst for blood, is hardly groundbreaking. But the depth of his characterizations and the sheer audacity of his vision is staggering. Cronos is an uncompromising vampire fable with a heartfelt morality play at its core, invigorated by the director's childlike sense of wonder and his talent for blending elements of gritty realism and nightmarish fantasy.

3. Suspiria
Every sequel needs at least one holdover from the original, and this list is no exception. So it seems elementary that the only selection to make a return appearance from last year's roundup should be Suspiria – essential viewing both for horror aficionados and newcomers curious about the genre. Don't bother trying to make sense of the plot, which is deliberately absurd. Dario Argento's surreal 1977 masterpiece, about a German ballet academy where students routinely end up on the chopping block, is instantly memorable for its bold, Technicolor brillance, gruesome splatter and a score, by the Italian prog-rock quartet Goblin, that eerily, seamlessly ties it all together.

4. The Stepfather
Skip the toothless 2009 remake and travel instead back to 1987, when Terry O’Quinn – the actor whose career would be redefined by John Locke, the bald, pseudo-spiritual survivalist he played on TV’s Lost – still had hair. At the time, without cell-phone cameras and the Internet, it was more conceivable that a patriarchal sociopath could wander from suburb to suburb, preying on single mothers and their children in a ruthless quest to complete the perfect American family. O’Quinn brings enough menace to the proceedings to keep us unnerved, though Joseph Ruben’s cult favorite is not without an appreciable flair for macabre comedy.

5. The Beyond
If Argento artfully championed surrealism over straightforward narratives, Italian compatriot Lucio Fulci – the so-called "Godfather of Gore" – was clearly more interested in graphic depictions of the grotesque than lucid storytelling. The Beyond (1981), in which a suspected warlock unlocks one of the world's seven portals to hell, is cheerfully demented proof. Short on plot, it sustains, for roughly 90 minutes, an atmosphere of unadulterated dread, evident as much in the movie's most gratuitous indulgences (flesh-hungry tarantulas devouring the eyeballs of an immobilized victim) as in Fulci's masterful use of fog and shadows.

6. Martin
George Romero is so inexorably linked to the Living Dead movies that his directorial efforts outside the franchise (including Knightriders, Monkey Shines and, curiously, the 1974 TV documentary O.J. Simpson: Juice on the Loose) have been largely overlooked. Martin (1976) deserves better. The story of a bored, introverted teenager (John Amplas) who fancies himself a vampire – a delusion he accepts at the expense of the women he slices and devours – the director's plaintive take on vampire lore is one of his tenderest and most devastating offerings.

7. Halloween III: Season of the Witch
Give credit to John Carpenter, founder of the franchise synonymous with the silent, slow-moving Michael Myers, for daring to start fresh here. As Witch’s producer – he and longtime collaborator Alan Howarth also supplied the movie’s creepy electronic score – he abandoned his roving psycho for a different kind of Halloween yarn, about a sadistic prankster (Dan O’Herlihy) selling deadly masks to America’s kids. If fans had known to expect a slyly satirical, self-contained chiller – inspired, like Romero’s Creepshow, by old, Tales from the Crypt-style pulp comics – they might have welcomed the in-name-only 1982 sequel as more of a treat than a trick. Instead, Halloween III left audiences cold for all the wrong reasons; taken on its own terms, it’s a funny, genuinely disturbing B-movie that deserves a second chance.