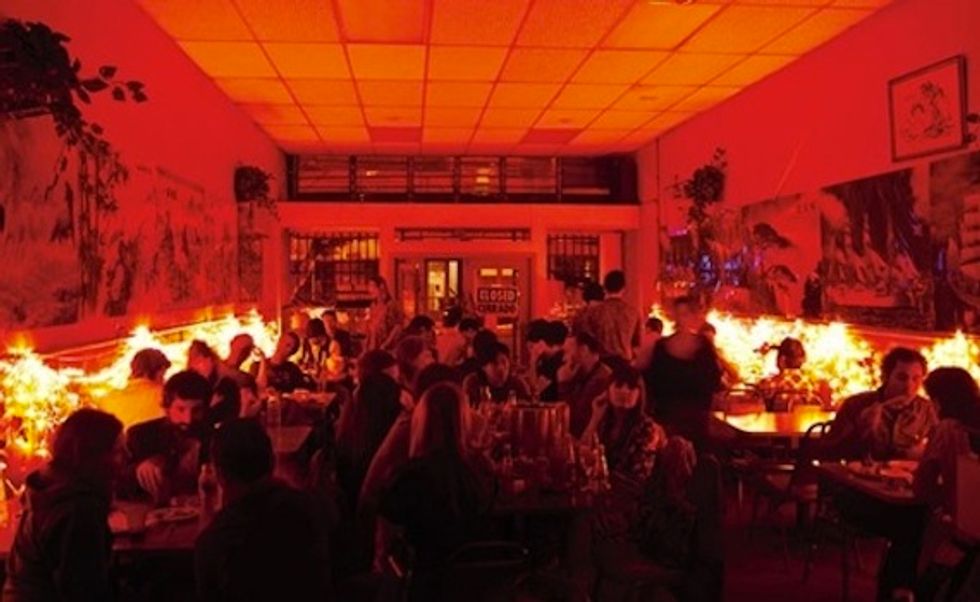 How Does a Restaurant Become the Next Big Thing?

I can get you a table for two at 5:30 or 9:15 on Monday night three weeks from now.” Yep, this is the sound of a successful restaurant. Scoring a primetime reservation at the latest hot spot is like winning a trip to Mexico.

So how does a restaurant go from flicker to flash point? Well, notable food and a catchy concept can’t hurt. Nor can a big-name chef, prime location, solid wine list, talented bar manager, a good-looking and well-trained staff, cool decor, and deep investor pockets. But while all these plusses can help a restaurant start off strong, they don’t necessarily guarantee—nor are they requisite to—becoming a white-hot spot. Just look at Mission Chinese Food. The hole-in-the-wall Chinese joint that started as a food truck, its chef brand new to Chinese cooking, now has a line out the door every night of the week and a second cookbook in the works. In every way, the Mission Chinese story is nothing short of a miracle.

If PR is the traditional route to generating buzz, then most of the big restaurants in town are old school, enlisting dedicated teams to ensure word gets out well before the doors swing open. And with good reason: An early nod from a national magazine like Bon Appétit means business. Ditto a nomination for Best New Restaurant from the James Beard Foundation, a surefire catapult onto the national radar. Take Frances, which earned the coveted mention in 2010 just three months after opening. Chef-owner Melissa Perello had an excellent pedigree, of course (Charles Nob Hill, Fifth Floor). But she also opened Frances after a bit of a hiatus in a cursed location on a sleepy street in the Castro.

So what’s the recipe for success? In the case of Frances, the restaurant supersedes the hype with a comfortable space that hits a classic SF note, a polished-yet-welcoming staff, a choice wine list, and pitch-perfect food that over-delivers for the price.

Also off the beaten path, Flour + Water opened in the Mission in 2009 with similarly unexpected fireworks. There were no guarantees for a team of relative newbies, including chef Thomas McNaughton: “Tom was young, so talented, but not well known, and this was the first run for the opening partners as a duo. So, lots of ‘green’ happening,” says Liam Passmore, who handled the opening PR. But Flour + Water’s handcrafted Italian cuisine hit before the city became saturated in pizza, the pricing was in sync with the quivering economy, and the lively vibe and easy style appealed to the going-out set. James Beard nomination for Best New Restaurant: check. And an hour wait on a Thursday at 9 p.m. still.

Then there’s the astral factor. Frances scored a Michelin star in no time. Both Frances and Flour + Water received three-star nods from San Francisco Chronicle critic Michael Bauer, whose reviews have come to bestow the kiss of life—or death—on a fledgling eatery. High-profile restaurants prepare for Bauer’s first unannounced visit like an ardent suitor—you’re likely to find a perfect Negroni (his favorite) on cocktail lists and fresh flowers in the bathroom. One restaurateur told me they ditch the flowers post-review.

While the opinions of the media still have power to steer diners toward the next big thing, social media has become a major player in determining a restaurant’s It factor, especially in tech-obsessed San Francisco, where diners are now closer to chefs and industry pros than ever. If a respected chef publicly tweets that a dish at Bar Tartine is “sick,” this is often all a tuned-in diner needs to move that restaurant to the top of their list. The restaurant industry’s seal of approval especially carries clout in SF. “I always tell clients that the industry is a very important audience—almost as important as the media,” says restaurant publicist Michele Mandell.

Marketing-savvy restaurateurs are also carefully constructing their Facebook pages and other social networks. New Hayes Valley restaurant Rich Table even supplies their Twitter and Instagram handles (@richtable) on their menu.

Restaurateurs know a good thing when they’ve got it. Once the fire’s going, successful operators can harness their dedicated audience to create a groundswell for sophomore concepts—think Delfina’s Pizzeria Delfina and Locanda. And since some secondary projects are designed to attract diners at a lower price point, like Quince’s approachably priced Cotogna, a growing restaurant group can quickly gain new fans.

But a well-known name over the door and a star-studded cast inside don’t guarantee a winning restaurant. Charles Phan’s Wo Hing General Store, for instance, hasn’t quite caught on. Lunch service was discontinued, and celebrated bar manager Brooke Arthur has moved on, all despite a killer location on Valencia Street and gangbuster business at Phan’s mainstay Slanted Door.

Sometimes a fresh approach is required, and in San Francisco, making it personal counts for a lot. Long lines at Wise Sons Delicatessen affirm how much we want to gorge on quality pastrami—made by a couple of good Jewish boys—that any bubbe would approve of. And some locals regularly pray in the pizza chapel that is Una Pizza Napoletana, where a single New York expat, fiercely dedicated to his craft, makes and serves every last pie himself (don’t even talk about the wait). Both are hard to replicate.

Which brings us back to the enigma of restaurant hotness: Mission Chinese Food. When chef Danny Bowien and co-founder Anthony Myint started Mission Street Food out of a truck in 2008—before the street food scene revved up—they were surprised by the crowds who came for their PB&J (pork belly and jicama) flatbread. But it goes to show, if you got it, then you got it.

Mission Chinese’s dingy location, big inventive flavors, quirky hipster style, and fun vibe stirred up mega media attention. The success has spurred the crew to open a second location—in New York. Gutsy. And look at that: The New York Times gave the offshoot two stars; the line is so long that they’re giving away beer to waiting patrons. It seems that while Mission Chinese originally appealed as a novelty (bring on the kung pao pastrami!), the food is so damn good that folks kept coming back. It’s like a culinary drug dealer: The first hit of lip-numbing Sichuan peppercorn is free.


Marcia Gagliardi is the contributing food editor for 7x7 and author of the weekly Tablehopper e-column and book The Tablehopper’s Guide to Dining and Drinking in San Francisco. Email her at marcia@7x7.com, and read more at tablehopper.com.