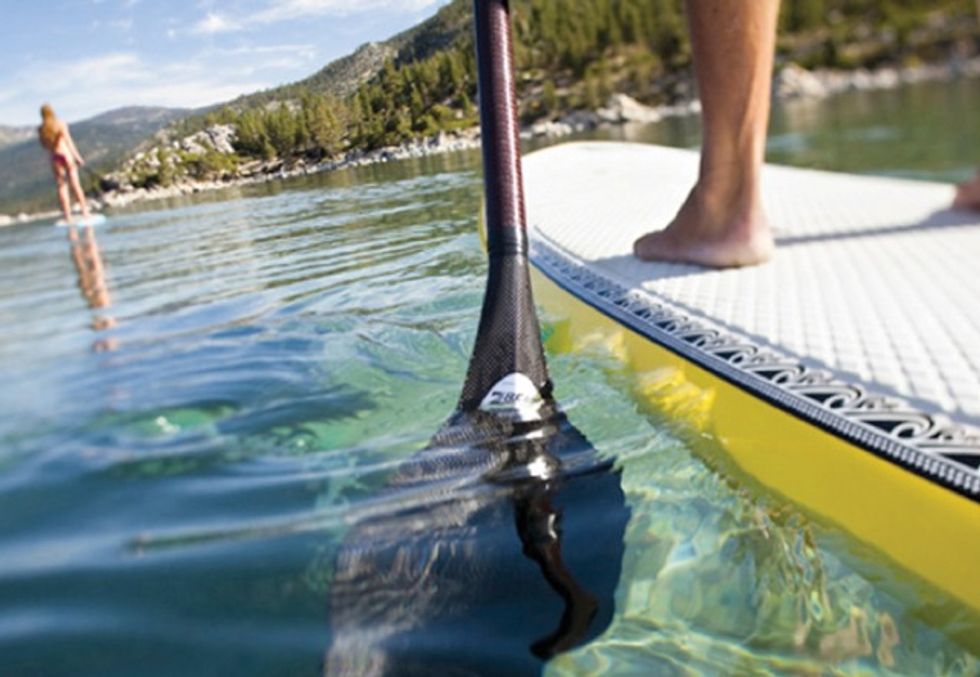 How to Spend the Perfect Weekend in North Lake Tahoe

I’ll admit that my experience in Tahoe had been limited to the South Shore, with its looming casinos and one great fish taco joint (shout out to Freshies!), but I have recently expanded my repertoire north to Squaw Valley and its spectacular surrounding geography.

The Resort at Squaw Creek is one of those great family hotels reminiscent of the fictional Kellerman Resort in Dirty Dancing, right down to the corn hole games on the lawn, right down to the verdant golf course, right down to the s’mores around the fire pit, right down to the kids splashing in the pools, and sans, of course, the pornographic rumbas taking place in the staff quarters. Our fireplace suite was cozy, which, in this case is not—I repeat, not—code for “cramped.” Oversize club chairs near the large bay windows made comfortable front row seats to one dramatic, yet all-too-brief, thunderstorm. The fully equipped kitchenette came in handy when leftovers from our epic dinner at the resort’s signature restaurant, Six Peaks Grille, required refrigeration, as succulent beef tenderloin or fresh pasta tossed with morels and housemade hunter sausage often do. (Why bother with leftovers, you ask? Like good epicureans, we had the intuition to save room for the chocolate-dipped strawberries and champagne left for us during turndown.)

Tahoe practically begs for a Choose Your Own Adventure approach. For our token spin around the Lake, we decided to rent paddle boards from Tahoe City Kayak in the early morning hours, before the speed boats could wreak havoc and turn a gentle paddle into a surf expedition. Besides the frigid temperature of the water, there’s no reason to fear falling in. As someone once told me years ago, “If you fall in, don’t worry—just stand up.” (The water level is low due to last winter's disappointing snow fall.) The two decidedly un-wimpy hikes we did, Five Lakes in Alpine Valley and Shirley Canyon in Squaw, were mere minutes away by car from the resort. Word to the wise: Shirley Canyon isn’t as much a hike as it is a 3.5-mile vertical scramble up the side of a mountain, but if your knees are decent and you’re intrepid enough to brave a not-so-well-marked trail, you’ll be rewarded with panoramic valley vistas at your final destination, High Camp, located more than 1,300 feet above your starting point (never fear, you get to take the gondola down for free). And when your badonk looks amazing in your jeans the next day, you’ll be doubly glad you took on the challenge.

I’m sure there’s some famous Shakespearean quote that would fittingly describe the midsummer's night we spent taking in a production of the Bard’s rom-com, "As You Like It," by the Lake Tahoe Shakespeare Festival. The open-air theater at Sand Harbor State Park, about an hour’s drive around the Lake from Squaw Valley, had been freshly sprinkled by menacing storm clouds, but during the three-hour production, nary a drop fell from the sky.

I’ll admit, I didn’t have high hopes for the evening, theatrically—or meteorologically—speaking. I had seen a production of the same play staged by the Marin Shakespeare Company just weeks before and felt so fidgety and exhausted by the end that each stanza seemed to go on forever. Granted, the Marin production was a more classical version, and a pretty good one by all accounts. For purists, that might be just fine. But I prefer my iambic pentameter a little more palatable—that is, completely transformed into teenage angst (case in point, 10 Things I Hate About You, aka "The Taming of the Shrew"). But I digress.

The Tahoe Shakes production of "As You Like It," set at the turn of the 20th century, referenced modern culture in its own way—street-wise phrasing, for example, was seamlessly, humorously, integrated. A barbershop quartet was a clever take on a chorus. Feats of tap dancing were unexpected and added comic relief. Stylish and crisp and wholly entertaining, the show presented Shakespeare for the Now Generation. And only after the cast’s final bow, as the audience filed out of the theater to the beat of a Beatles medley, did the skies once again begin to drizzle.