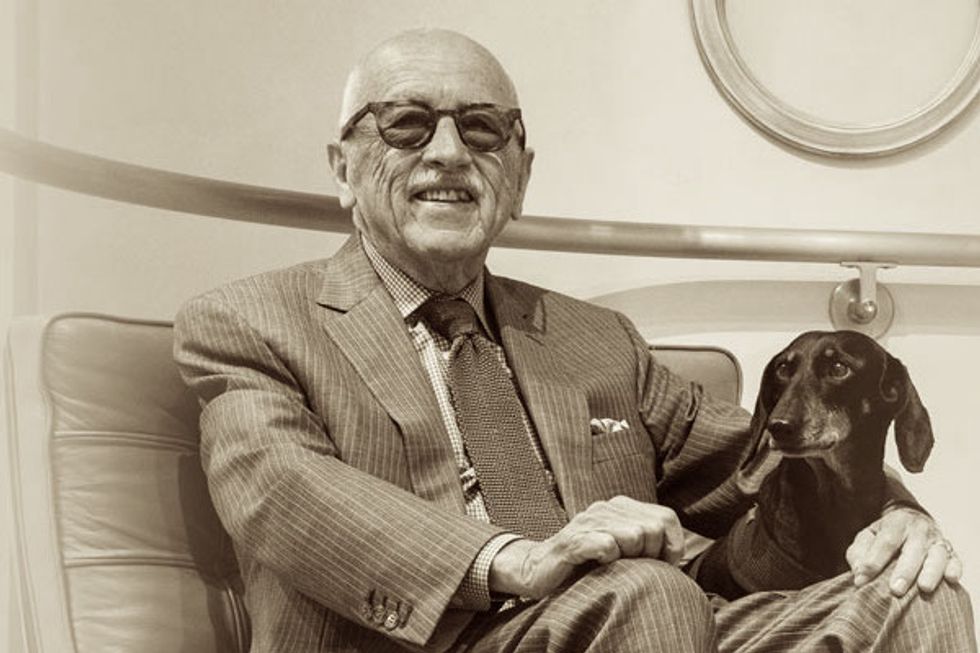 If you had wandered through the Financial District, City Hall, Union Square, or Pacific Heights this morning, you would have wondered if everyone had gone away, or at least gone shopping. Instead, the throngs were gathering at Grace Cathedral to honor the memory of beloved Wilkes Bashford, the dapper clothier who outfitted several generations of San Francisco’s best-dressed men and women.

A trio of San Francisco mounted police officers in full dress uniform stood sentinel at the foot of the cathedral steps, bearing the flags of the United States, the State of California, and the place Wilkes made his sartorial mark, the City and County of San Francisco. It set a gently surprising and entirely stylish tone to a ceremony that remembered the man for being precisely that, and a great deal more.

Wilkes Bashford with Ralph Lauren in 1983 (Photo: Rubin, via The Chronicle)

The cathedral filled quickly with a wide swath of SF notables, and hundreds of admirers who dressed their best; a sea of gentlemen in well-cut suits with well-knotted ties and discreet pocket squares, and legions of well-coiffed women in what can only be described as elegant mourning, with considered touches of fur, leopard, and a few proper veiled hats.

Everywhere you looked, there was someone you had seen in photos or in person with Wilkes: Ann Getty, Matthew and Jason Goldman, David Gockley, Larry and Pam Baer, Daniel Lurie, Nion McEvoy, Jonathan Moscone, Joanne Hayes-White, Gavin Newsom, Ed Lee, and hundreds of others who felt they were saying goodbye to a member of the extended family. Wilkes knew them all, and made each of them feel as if they were a cherished friend; if they were also a customer, so much the better.

Ever put together, even when wet. (Photo via WWD)

Wilkes would have particularly approved of the elaborate vestments of the Episcopal Bishop, Dean, and clergy who processed up the nave, and the chausibles and dulcet voices of the Choir of Men and Boys who sang throughout the service. Tributes from Charlotte Schultz, Kamala Harris, Tyler Mitchell, Alexander Julian, and his perpetual Friday Le Central lunch date, Willie Brown, conveyed aspects of his originality, his attention to detail, his work ethic, and his unflagging dedication to local charities, particularly Pets Are Wonderful Support, Muttville Senior Dog Rescue, and Partners Ending Domestic Violence.

When a tremulous Paula West sang, “I’ll Be Seeing You,” and “Ev’ry Time We Say Goodbye,” the hankies emerged; when Renee Lubin of Beach Blanket Babylon closed the service with “San Francisco,” the smiles reappeared, just as they always always did after a few minutes in Wilkes’ company. After the service, friends clustered on the rainy steps to recount happy times with him. When Wilkes looked at you with his twinkling eyes through his signature blue-tinted glasses, you felt honored. When he bestowed a compliment, or confided a local tidbit, or offered some encouragement for what you were doing in the city, you felt the benediction of a favorite uncle. And today, in a grand cathedral in a grand city, the grace of benediction was returned by many, many more. Fare thee well, Wilkes. There might not be a game of liar’s dice to pay the tab where you’ve gone, but we can be sure that now the angels will be better dressed.

One last tribute to Wilkes, in the window of his namesake store on Sutter Street.