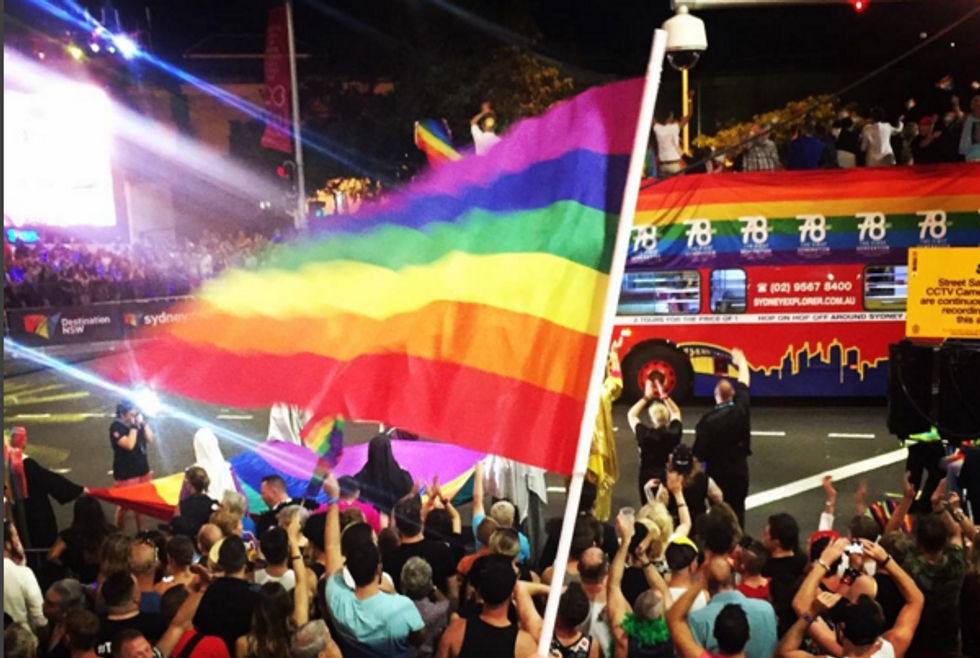 In the United States (and most of the world), Mardi Gras celebrates Fat Tuesday, the day before the fasting period of Lent begins, when gluttony and over-indulgence are encouraged and celebrated in the streets with colorful beads and costumes—we're looking at you, New Orleans. In Australia, however, Mardi Gras happens closer to Easter, doesn't involve enormous amounts of food, and doesn't even take place on a Tuesday. Confused? So were we.

In fact, in The Land Down Under, it's easier to think of Mardi Gras as a synonym for party: The day celebrates not the beginning of Lent but the country's vibrant LGBT communities. And Aussies take it very seriously.

The annual Sydney Gay and Lesbian Mardi Gras Festival kicks off in mid-February with a series of events, talks, concerts, sports, picnics and more; and culminates in the big parade—a citywide holiday that brings more than 10,000 people to Oxford Street, the capital city's gay district, for a glittery explosion of drag queens, floats, and fireworks.

On March 5, I arrived at the parade expecting something similar to the debauchery that usually surrounds Pride in San Francisco (an excuse to get day drunk and take off all your clothes). But while Sydney's Mardi Gras has all the essential elements—more than 150 floats, dancers, dykes on bikes, and more parade down a two-mile route while spectators cheer and wave glow sticks in the warm summer air—it's altogether something else. Sort of like the Australian Rose Parade, except it begins at 8pm and carries on late into the night.

(This might look familiar to San Franciscans: The start of the parade was marked with a rainbow catwalk.)

As in SF, float participants include everyone from the police and fire departments and local LGBT nonprofits to those celebrating furries and bears and big corporate sponsors such as Facebook, Google, and Airbnb. The whole affair is surprisingly kid friendly—one little girl near me in the viewing area stayed up way past her bed time to watch her mom dance the samba behind the rainbow-bedazzled Qantas float.

Even Prime Minister Malcolm Turnbull turned up in a light pink button-up to wave at the crowd. Can you imagine Obama showing up at something like this?

And while jet lag prevented me from keeping my eyes open past midnight, the post-parade party inevitably flowed onto the streets, where young and old, straight and queer, toasted beers and debated whether or not marriage equality would pass this year—it's up for a vote in Australia come election season.

But one thing is certain: Sydneysiders know how to throw a good party.  //  Sydney Gay and Lesbian Mardi Gras Festival, mardigras.org.au